The country’s first hydrogen refuelling stop is set to be located at Waitomo Group’s Te Rapa site as the company gears for a low-carbon future.

Waitomo has applied for consent to add hydrogen to the existing petrol and diesel offering, and is also applying for consent at a new build in Palmerston North.

The hope is for hydrogen-fuelled trucks to be on New Zealand roads within 12 months, managing director Jimmy Ormsby says.

Trucks are where “the needle can be moved” in terms of emissions, he says. “The more heavy trucks that can use alternate fuels like hydrogen, the bigger the impact in terms of reducing emissions.

“If you can shift a fleet of trucks, say 50 trucks, onto hydrogen, there is a proportionally a significant amount more EV [cars]that you’d need to have on the road to be the equivalent.”

The Hamilton-based company is partnering with Taranaki-based Hiringa Energy to help build the network, which is aimed at trucking fleets and will initially have eight sites. Waitomo will be providing the platform, with Hiringa investing in the hydrogen, trucks and infrastructure. 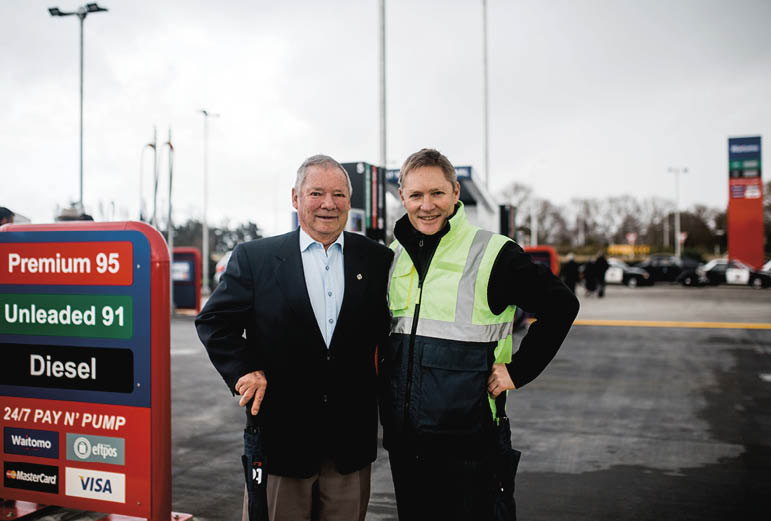 Grey and Jimmy Ormsby at Mystery Creek for Fieldays

Hydrogen refuelling will also be offered at a high-profile site at the Ruakura Superhub, with Waitomo set to open a fuel stop and service centre accessible off the Waikato Expressway.

The centre – the first for the new Hub in a coup for Waitomo – is planned to be open by mid 2022 and will include a convenience store and two quick-service restaurants in a departure from the company’s usual fuel-only sites.

Ormsby says they had been talking to the landowner, Tainui, for a number of years, after they started leasing their Te Rapa site from the iwi. They have also been developing their capability so they could be seriously considered as a partner at Ruakura by the iwi’s investment arm, TGH.

“I believe that we have alignment with TGH, in terms of their vision for building the Waikato from the inside out and partnering with other local or regional businesses.”

The Ruakura site will include EV charging, as do some other Waitomo sites, with Ormsby saying they have an open mind to alternative technologies and are anticipating a more fragmented market in future.

“There is going to be different energies for different applications,” he says.”There will be legacy people that, for their application, a diesel ute is the best tool for the trade – they might be working remotely, they might use the vehicle for recreation as well as work, and that’s the best thing for them.

“If you’re living in a metro area, and you’ve just got short journeys, an EV might be perfect, because you can park it in your driveway, charge it up. And then for heavy trucks, or any fleet working in metro areas, a battery vehicle might be appropriate or, alternatively, diesel or hydrogen.”

Hydrogen could become the dominant fuel source for long-haul trucks but Ormsby is not expecting the oil industry to “walk away” from its historical business.

“The oil industry’s got trillions of dollars invested in all this infrastructure, and it doesn’t seem logical to think that they would just walk away from that. It’ll just get [to]: at what point do they transition? We need to be ready for it when it does happen.”

Waitomo is buffered by its relatively small size, with between 2 percent and 4 percent of the market.

“If you then segment that into the alternate energies, then it’s even a lot smaller again. So I don’t see the transition affecting our existing business materially, not within the short term or medium term.”

He points out that with the average age of New Zealand vehicles being about 14 years, there is still plenty of “runway” for internal combustion vehicles being bought today.

Ormsby expects operators of diesel fleets will want to “feather in” hydrogen rather than making an overnight switch. “So we’ll be able to offer them both a hydrocarbon and hydrogen solution.”

He expects service stations to evolve over time. “If the fuel offering changes to being some sort of algae-based or biofuel, then I think the offering won’t change much. Because if you can put that into your car, and fill it up just as you’re filling up today, and that’s quick and easy and you can get a pie or a drink and carry on your journey, why would you change?

“There will have to be something else that really changes movement. People like their vehicles, they like the independence of being able to travel when they want to travel.”

A small player it may be, but Waitomo has punched above its weight when it comes to upcoming changes to the regulations in the Fuel Industry Act.

Key provisions introducing a more competitive element for resellers such as Waitomo come into force on August 11.

Ormsby describes it as a reset for the industry, perhaps the biggest since deregulation in the early 1990s. It will provide what he describes as a greater competitive tension between the major oil companies for the likes of Waitomo’s business.

“We see that when the regulations come into play, that competitive tension will be created. And then we will be able to pass that to our customers and give them potentially better value for their product.”

The changes came after the Commerce Commission found the wholesale market wasn’t competitive enough, and will give Waitomo and other distributors greater capacity to shop around for their fuel.

Waitomo participated in the submissions for the changes, with Ormsby saying they were one of the only second tier players to participate in the whole process. The time-consuming visits to Wellington, meetings and conference attendance paid off.

“I’m really proud of what our contribution was to this process, because I believe that it will enable other participants to test the market as well and ultimately will ensure that New Zealanders get as competitively priced fuel as they can.

“If I could say that this government has delivered on one thing, if these regulations come into place, they said that they would review the fuel industry, they have reviewed it, they’ve come out with some regulations. And we’ve had the opportunity to participate, and we believe the outcome is going to be good for all New Zealanders.  Whatever your political persuasion might be, these guys have said that they were going to do that and, should the regulations come into force, then they have.”