A piece of enduring rural Hamilton history has an eye-catching new chapter in the form of a refurbished shipping container fitted out as a cafe on the city’s outskirts. Think of it as a slice of Melbourne in Matangi.

The brainchild of couple Sarah Carty and Keir Bettley, Front Paddock cafe evokes Carty’s inner- city Melbourne background in its chic container design along with Bettley’s long-standing farming family association with the land it stands on. 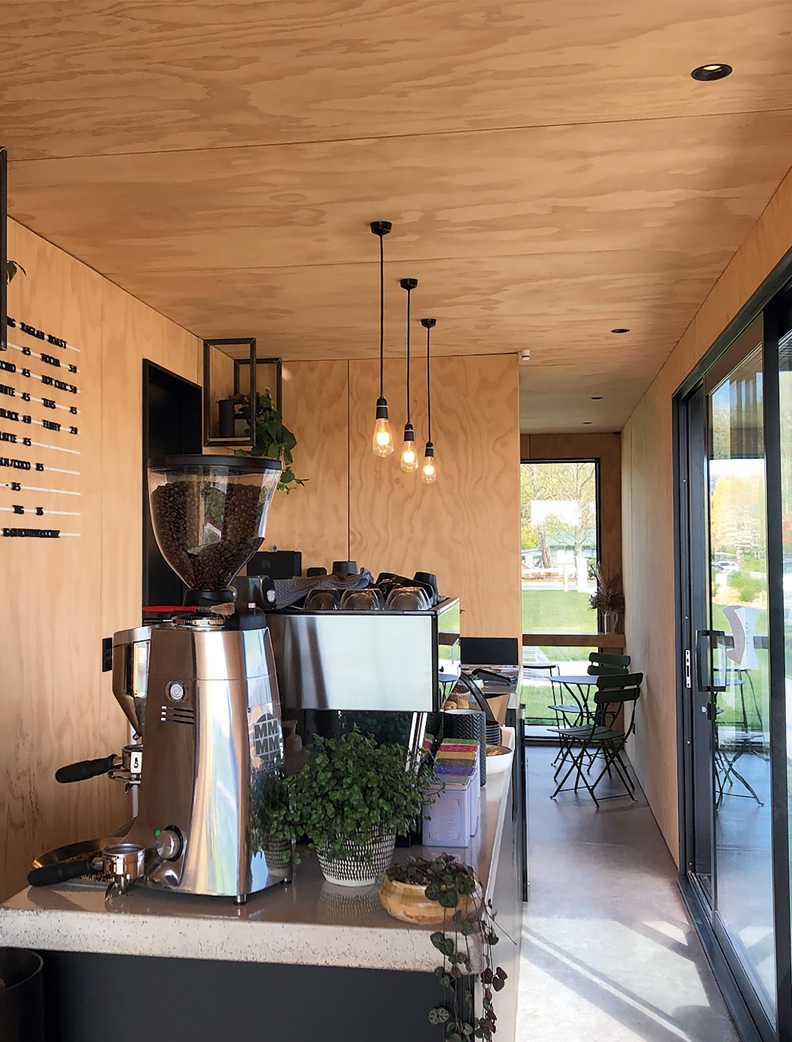 Opened after Covid lockdown, the Matangi Road cafe is a “passion project” for the couple, who live just a couple of hundred metres away.

Carty is an account director with Melbourne-based iD Collective, who are developing their New Zealand presence, and Bettley is a co-director of Signature Homes Waikato having bought the franchise with two others nine years ago.

It helped that Bettley was able to do the build himself with the help of a few mates. The refurbishment includes large windows at either end, providing welcome light and warmth. Carty, who manages the cafe and its social media, says she wasn’t initially convinced by Bettley’s idea for a plywood interior but now thinks it works well, reflecting the earthy surroundings.

With the Bettleys well known in the area – Keir’s brother and parents also live nearby on the former family farm – once work started, curious locals would stop and ask what was happening.

“I loved the process – designing it and seeing how it was going to work,” Bettley says. “It was quite a tricky undertaking, but we figured things out as we went. I’m really pleased with it.”

The job was carried out mostly at weekends, and completed after Covid lockdown, with the cafe opening on May 18.

Carty says the timing was “probably a bit nuts” but paid off, providing an opportunity to connect with locals who had just come off the back of a lockdown.

“As soon as level two hit, we took the opportunity. It was good because people were super keen to come and get takeaway coffees.” 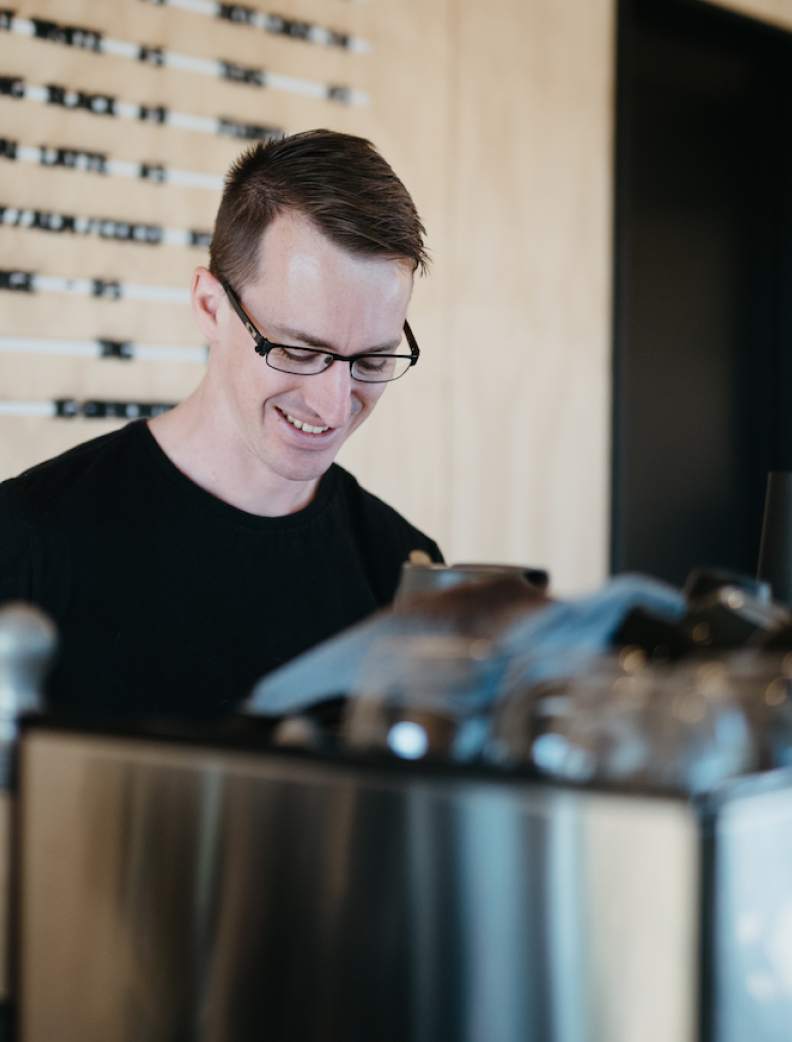 Ben the barista knows all the regulars Inside the cafe

Local suppliers are to the fore, with the cafe’s kombucha coming from Gutsy, which is based in Riverlea, and raw treats courtesy of Hamilton-based Little S and P.

There is also a plant stall from The Plant Girl and an organic vegetable stand courtesy of nearby Tomtit, a fellow startup.

The counter food comes from Volare while Carty says Ben, the barista, knows their regulars by name, along with their life stories.

Through Signature Homes, Bettley had already built the Meadows centre, and he and Carty could see the value in building a cafe for parents dropping off their children. Staff from Atawhai Assisi Home and Hospital across the road are also customers, as are other locals.

Carty says they have aimed to make Front Paddock a destination, particularly at weekends, helped by the petting zoo and playground. Long term, expansion of the cafe is in their sights including a commercial kitchen on site. 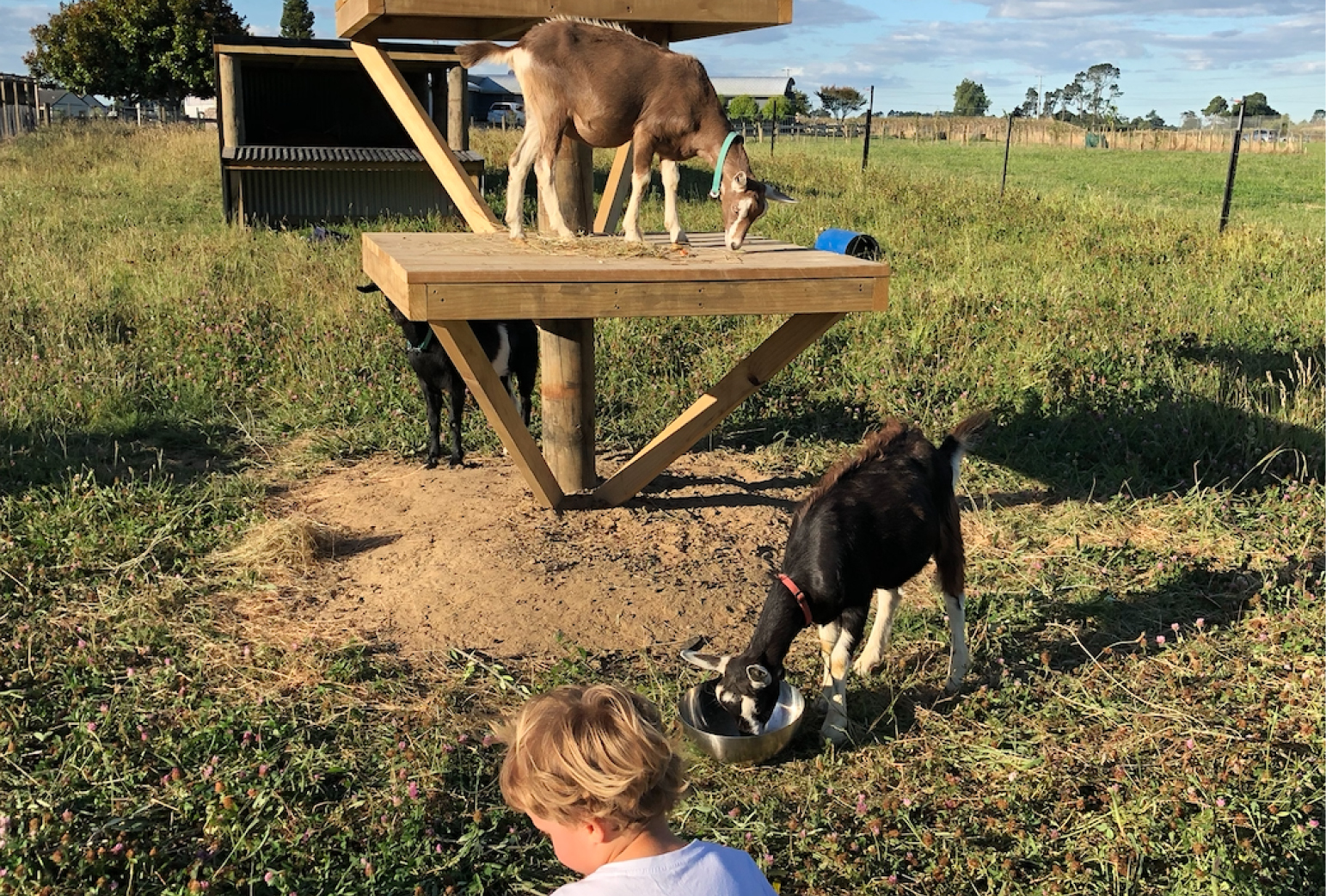 The petting zoo is a hit

While the cafe is the result of Carty and Bettley’s individual stories, it also reflects a wider Hamilton and Waikato history as urban settlements have gradually encroached onto their rural outskirts, changing the land use.

Originally used for dairying, later converted to maize cropping and subsequently divided by the expressway, the former farm alongside Matangi Road is now largely residential with some haymaking and grazing, as well as supporting the early childcare and cafe businesses.

The cafe’s name, Front Paddock, evokes that background, with Bettley recalling a time as a youngster when he would be kicking a rugby ball around on what was the farm’s front paddock and the only one not planted in maize.

Family history, as recollected by Keir’s parents Zane and Sheryl, takes the story back to Hamilton’s early days when a Bettley who was an officer in the British army was allocated rural and town properties. 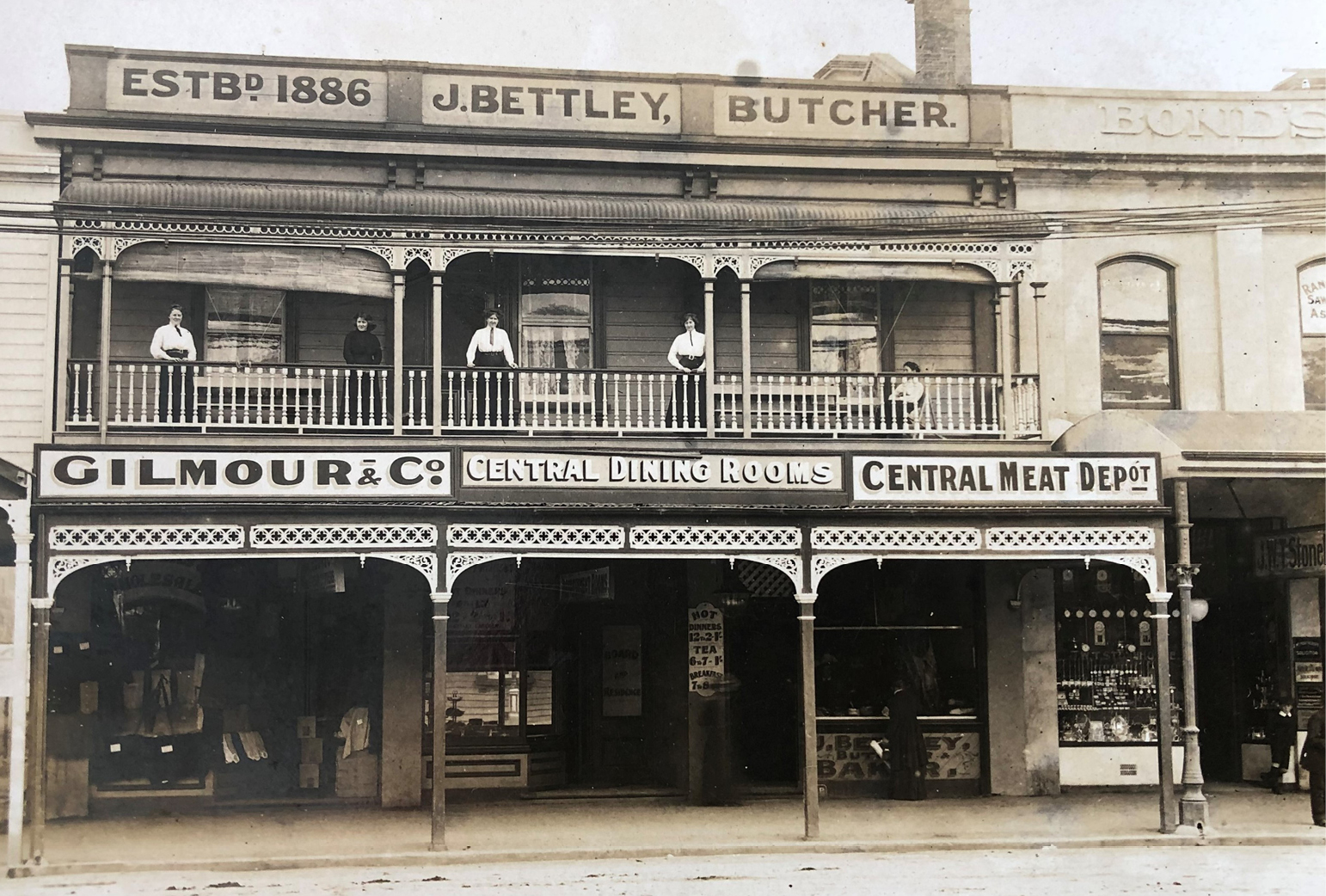 The early Bettleys had two town properties. One was in Victoria Street and was a tearoom and a butchers, with a boarding house upstairs. The second was a house situated opposite the courthouse where Countdown is today. The rural property was eventually divided into three.

A great-uncle of Zane’s, called Jack, had one portion and ran a butchery on his farm. It is his former land where Front Paddock now stands. Meanwhile, Zane’s grandfather, Arthur, had a portion that has now been subdivided. The third portion was for Jack and Arthur’s sisters, Maude, Lottie, Mabel and Nora.

Jack did not marry, and left half his portion to Zane’s father, George, and the other half equally between Zane and his brothers Craig and Warren.

The three brothers and their father formed a company in the early 1970s and continued to run a dairy farm of about 200 acres before changing to cropping maize in the late 70s. 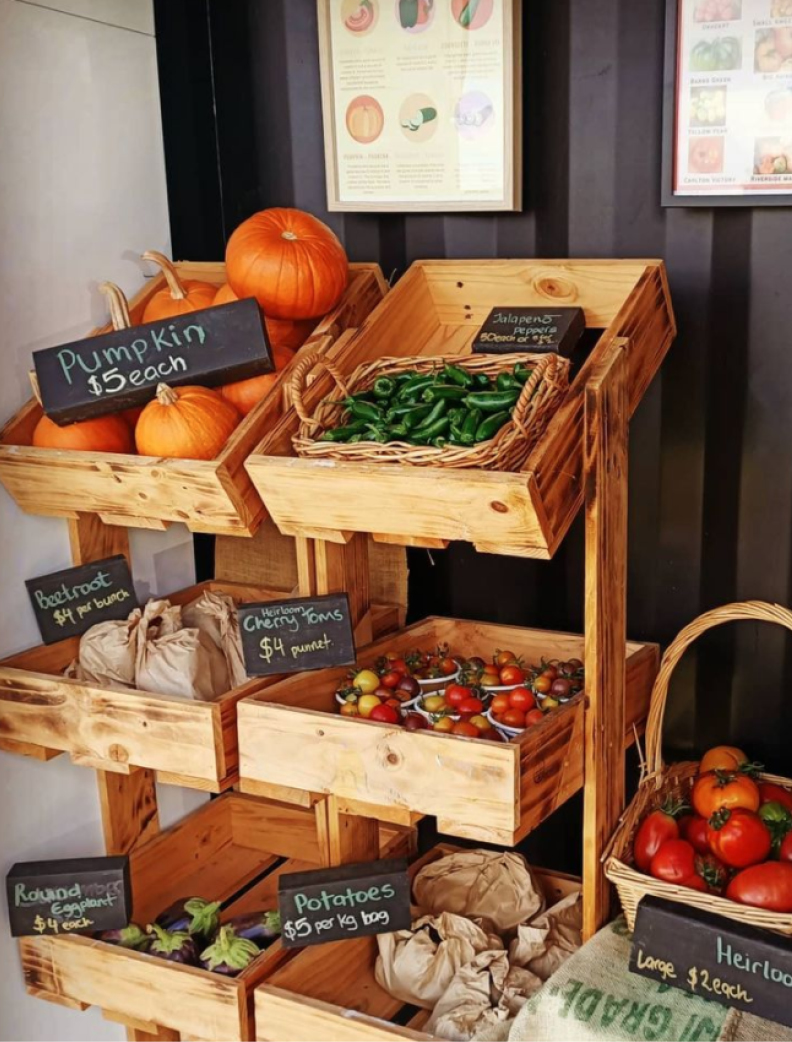 Further change came about 20 years ago, when Transit New Zealand designated part of the farm for the expressway, which virtually cut the farm in half. The government agency purchased about 110 acres off the company and eventually sold back about 30 acres. Too small to be used as a farm, the excess land has been leased out for potatoes and pumpkins, and for hay and grazing.

In continuing development of the block, about six years ago Keir Bettley built the home he and Carty now live in, on an 8000 square metre lot. Their trans-Tasman relationship became a Waikato one after Carty shifted from her native Australia, initially to Auckland and then two years ago to Hamilton where she is enjoying the lifestyle.

Two and a half years ago, Bettley’s Signature Homes then built a house for his brother on the second of three titles on the block of land, while their parents are currently building a retirement home on the remaining title. Its use has changed markedly, but the block of land with its farming history remains solidly in the Bettley family.