Rototuna Village’s new office and retail building will open fully tenanted as the burgeoning area proves a drawcard for business.

The paired buildings at the entrance to the new community centre in the north of Hamilton have been issued their code compliance certificate, with some retail outlets already open and the finishing touches to other tenant fitouts being completed.

Development manager Gareth Strawbridge, of Veros, says it is an up-and-coming area for tenants.

“There was a desire to be part of an exciting community that is growing in the north.”

The high-profile buildings, which set the tone for stage 1 of the new centre, are situated on the corner of Borman Road and North City Road in Rototuna North. 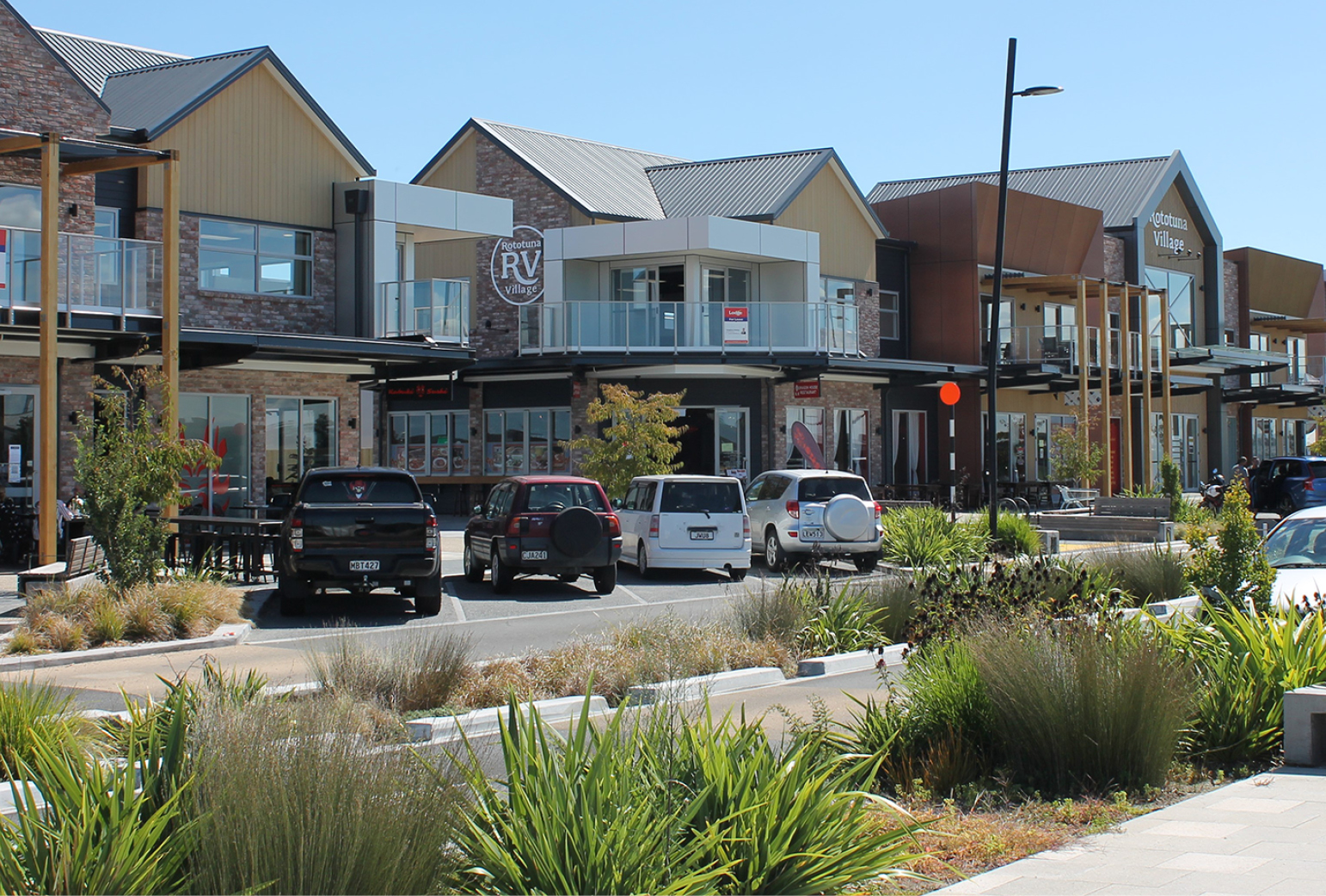 Each Rototuna Village building looks like a series of individual buildings, achieved through features such as a series of gables.

The sought-after north Hamilton location, with a growing population, has played a part in attracting tenants, while the neighbouring supermarket is also appealing for retailers, Strawbridge says.

He says the quality of the building has been a key factor for the developers, Kirkdale Investments, who wanted to deliver a long-term generational investment. Kirkdale have a strong connection with the land, having previously formed part of the family farm.

Kirkdale engaged Hamilton firm Byrne & Enright to design the buildings, each with retail/hospitality tenancies on the ground floor and office space on the upper level, with a design intent to form the gateway into the wider Rototuna Village. The main contractor has been Form Building & Developments who has helped deliver this vision.

The two buildings comprise the first commercial development following the supermarket, and will be supported by surrounding commercial, residential and amenity developments with a focus on community and connectivity.

“This is the first commercial stage that forms part of a wider structure plan that has been earmarked for 10 years.”

It is about setting the tone for the balance of the development, Strawbridge says.

“A key overall theme is around connectivity – providing a master planned community where people can work, live and play.”

Having the building fully leased following the past 12 months with Covid-19 is a great achievement, with Vaughan Heslop from Lodge Commercial driving the leasing campaign.

There has certainly been challenges from construction halting during lockdown, but tenants who had signed up have committed to the project, Strawbridge says.

Office occupants include a range of professional service providers with retail comprising a good mix of food and beverage operators as well as service retailers.

Byrne & Enright’s Paul Enright says they were first engaged as designers around 2015, with the consenting process taking longer than normal because of the requirements imposed by a Comprehensive Development Plan (CDP) for the area. 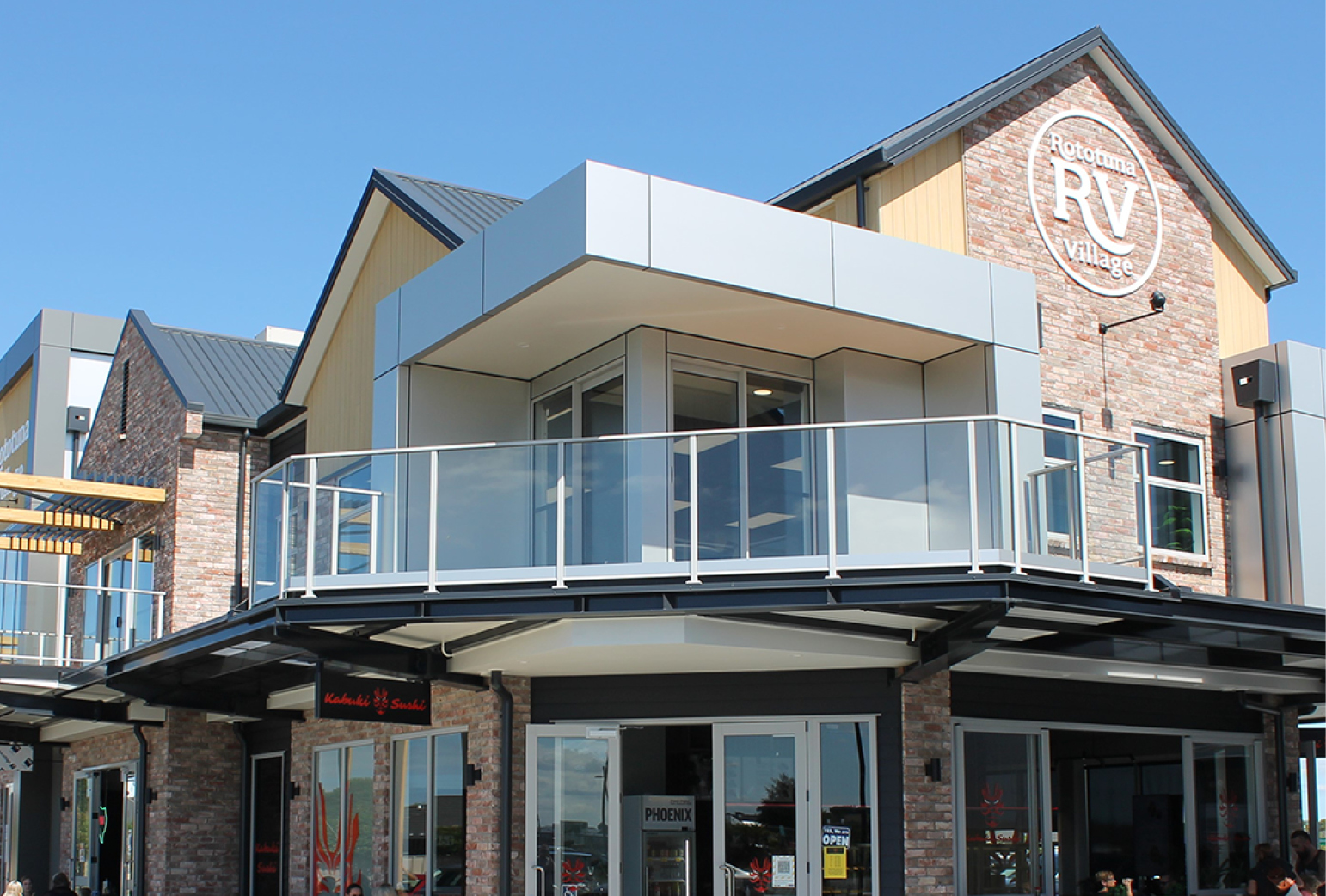 Once the resource consents were sorted out, however, he says the construction phase was rapid. “There wasn’t a quiet moment within the last year or so during construction.”

One of the design criteria was that each building had to look like a series of individual buildings, as opposed to one monolithic structure. That led to such features as a series of gables, and a variety of claddings including bricks to create the impression of separate smaller structures amongst one overall theme.

Enright says the buildings change in style along their length, from a residential flavour closest to  Borman Road to more commercial contemporary near the roundabout, which acknowledges the residential surrounds as well as the commercial aspect of the new village centre.

Byrne & Enright were able to draw on what they learned from the Lone Star mixed used building they designed on the corner of Hukanui and Thomas Roads in Rototuna, paying close attention to the needs of retail and commercial tenants, and flexing as required.

In fact, they have moved their office from that earlier building to the new one. “The opportunity came to move into here and we’re more than happy to do that because it’s a great showcase for us, one of our latest projects, one of our biggest ones and we’re really proud of it,” Enright says.

“I think the outcome really ticked the boxes in the CDP principles, what they were trying to achieve.

“The feedback that we’ve got is people enjoy being around the buildings, that it looks like a village as opposed to a shopping mall and it’s quite inviting, which is what we were trying to achieve. We have something that will draw people to it and create a vibrant space.”

The surrounding area is set to have a library, an aquatic centre, a bus interchange and public square, along with a mix of general, medium and high density housing.

Strawbridge says latest stages of general residential zoned housing have sold out, with a medium density development in design. Veros are managing the design and consenting for Kirkdale who, he says, are wanting to develop high quality medium density housing, with a focus on urban design and amenity. 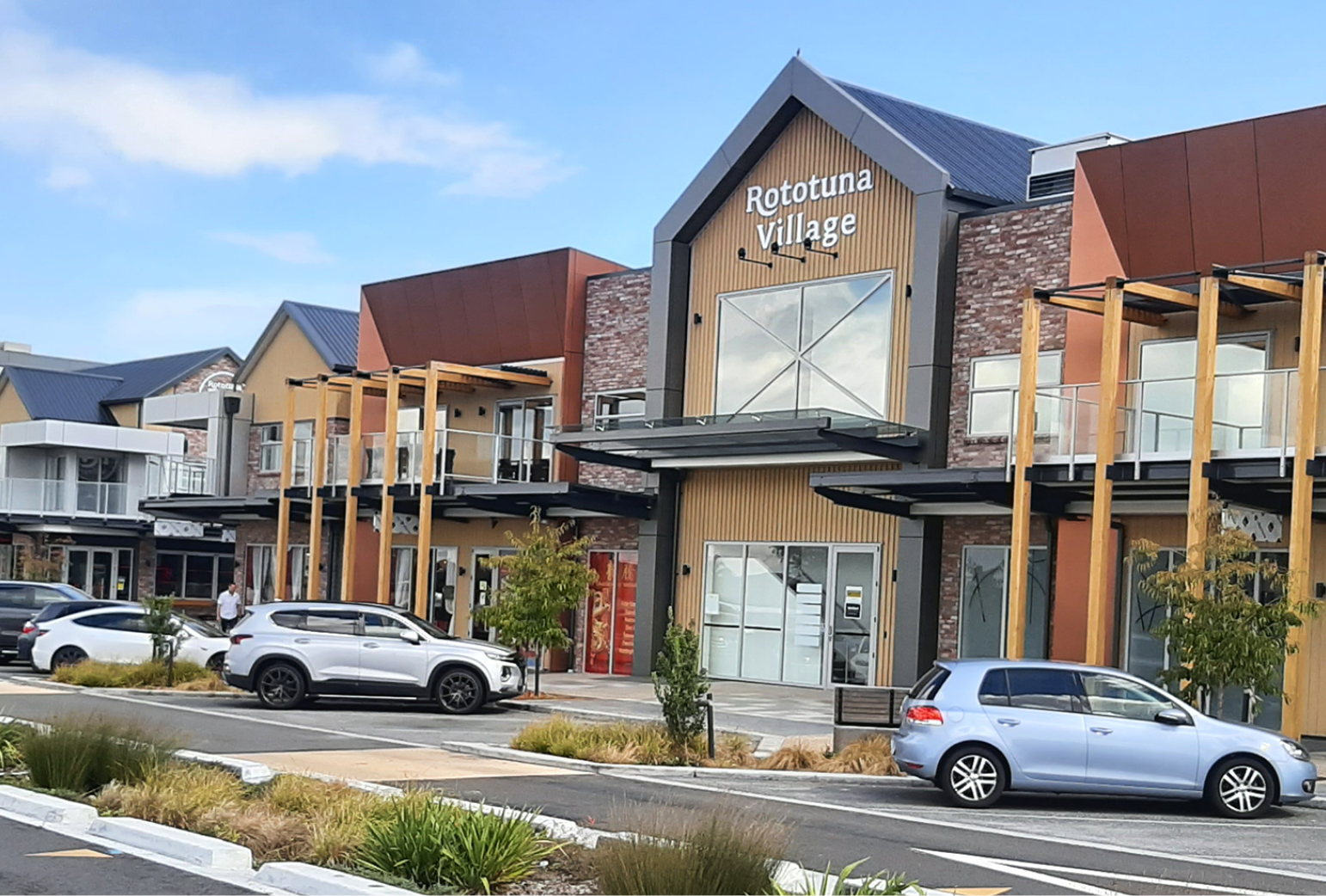 Strawbridge says Hamilton City Council are due to start the library build this year, while Summerset retirement village is close to completion.

Nearby, Rototuna High School is also about to start design for new buildings and Hamilton Christian School is set to kick off a programme for new classrooms , he says.

“There is a lot going on in the area that is attracting a large amount of enquiry from residents and businesses. This is certainly an exciting time for Rototuna,” he says.

Veros’ participation in the development started in mid-2018.

The firm has been involved from the concept design stage, working through initial feasibility and site investigations, then driving design and procurement, overseeing construction of the building contract and is also the asset manager now the building is complete. “It has been a privilege to be involved in the project with Kirkdale, and provide Veros’ full cycle of services from concept to delivery,” says Strawbridge who has been involved from the start.

“The Village is a great outcome for Rototuna North, and is a project that Kirkdale, Veros, Byrne & Enright and Form Construction are very proud of.”