To say Ebbett Hamilton have made a splash with their shift to Te Rapa would be something of an understatement.

Even on the first weekend they were moving into their new premises on Te Kōwhai East Road, before they officially opened, they were besieged by people curious about the exciting new building. 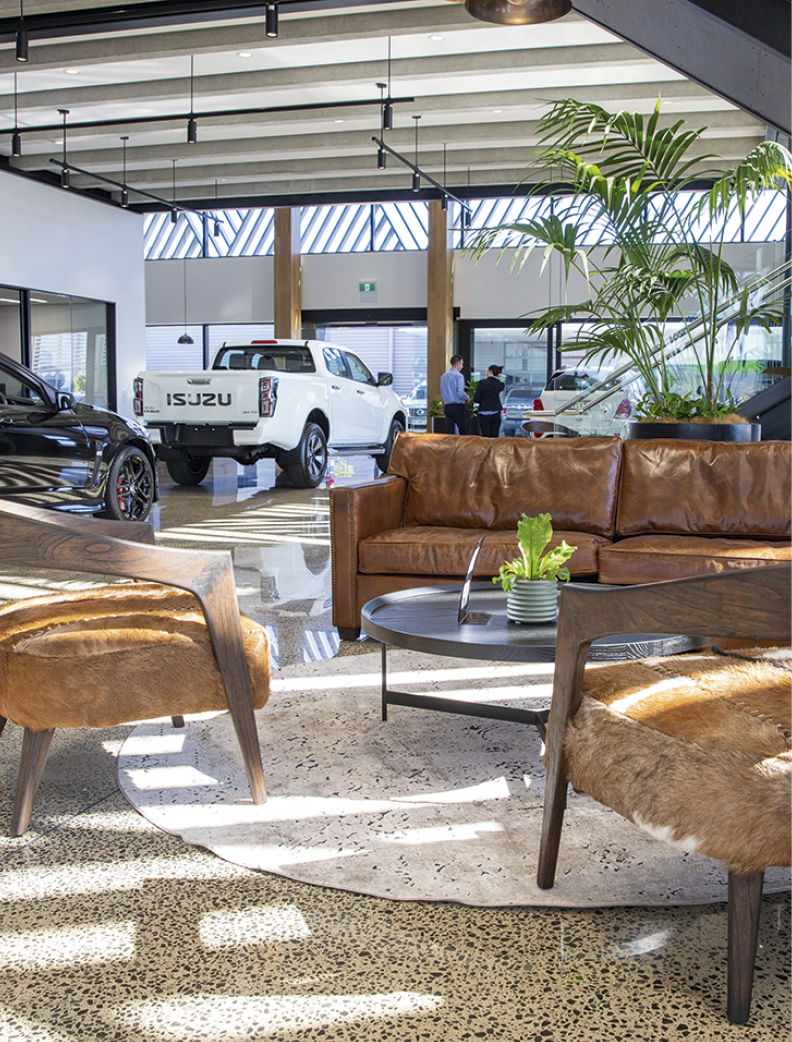 Those people were getting the first view of a space that boasts space, light and an inviting feel that comes from meticulous attention to detail.

“As soon as we started putting cars out the front it was just a magnet,” says Dealer Principal Karl Nation. “There were swarms of people. We had trucks and vans here unloading and all the doors open and people just wandering through.”

Originally intended as a new site for Ebbett Holden Hamilton, on relocation from their Anglesea Street premises, the Group’s directors, Ben and Walter van den Engel, were able to put their own stamp on the building when Holden announced they were pulling out of New Zealand.

However, rather than retreat entirely from the Holden brand which, as Nation says, goes with Ebbett like bread with butter, they have doubled down on supporting existing Holden owners, expanded on servicing and parts and are now also the national distributor for HSV parts. 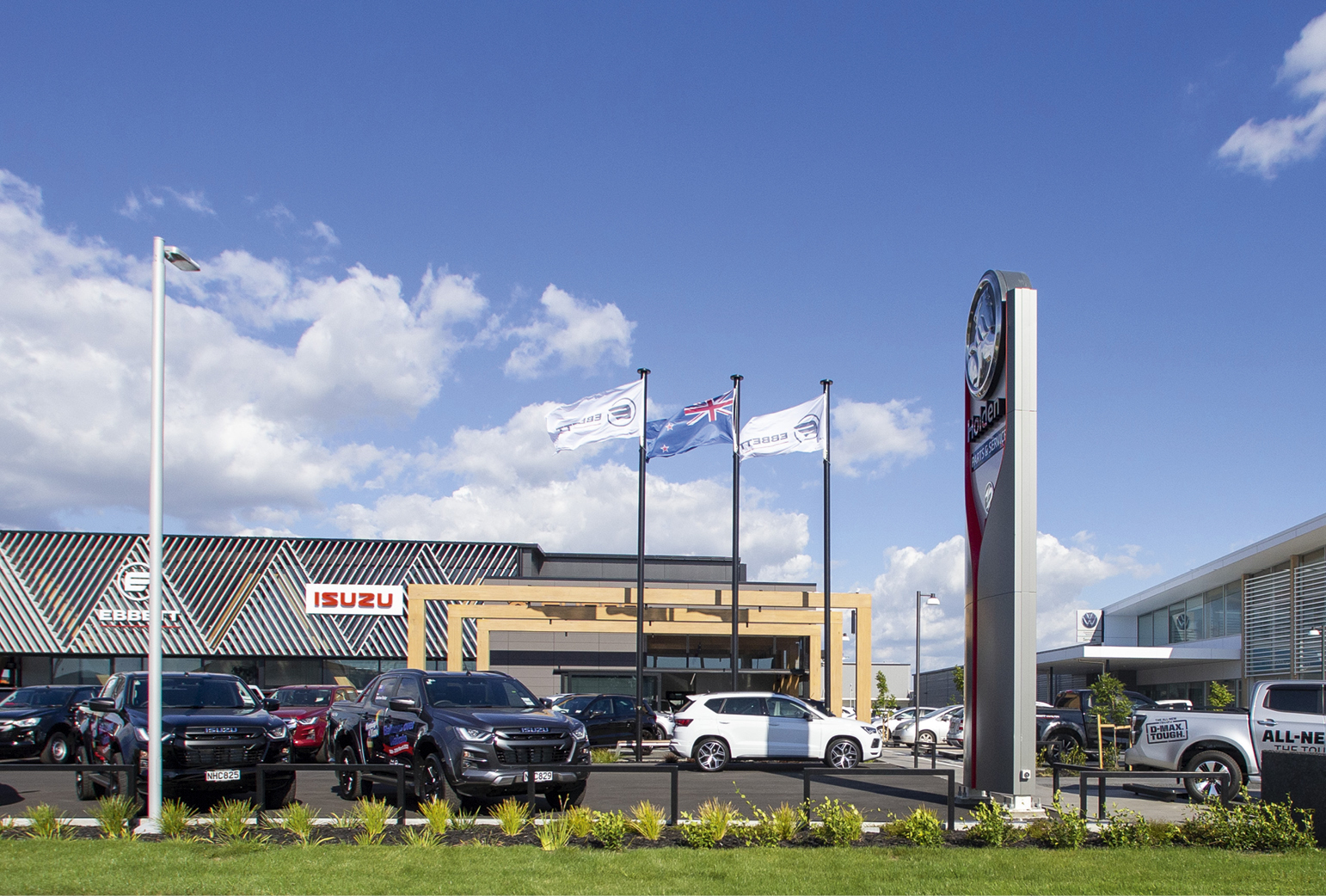 That sees them as probably the last dealer in the world to hoist the Holden monolith, which stands loud and proud at the street front.

It also saw them deliberately purchase as many new and preowned Holdens as they could, with those cars now taking their place on the forecourt, along with GMSV, CUPRA, SEAT and a brand that returns to Ebbett, Isuzu.

“We are really proud to welcome back Isuzu Utes, which, like Chevrolet, have been sold from Ebbett Hamilton in the earlier parts of our 93 year history, and our used car selection here is second to none, especially if you are after a preowned Holden or HSV,” says Nation.

Ebbett see a continuing place for Holden and plan to keep servicing and supplying parts for the marque well into the future, with opportunity opening up as other dealers pull back.

“Some Holden dealers, after last year’s announcement, really stepped back. We’re trying to do the exact opposite, and come to the fore. If you’ve got any question in regards to Holden or HSV, we are the experts to support you,” Nation says

Among the changes the Group made to the building after Holden closed was repurposing the planned events space into a showroom for two new brands, SEAT and CUPRA (recently described as Audi with a VW price tag!).

Ebbett have also changed the colour scheme, going with darker tones to create a more residential feel, reinforced by the relaxed furniture and a wall of plants above a central bench, with barista facilities for customers. 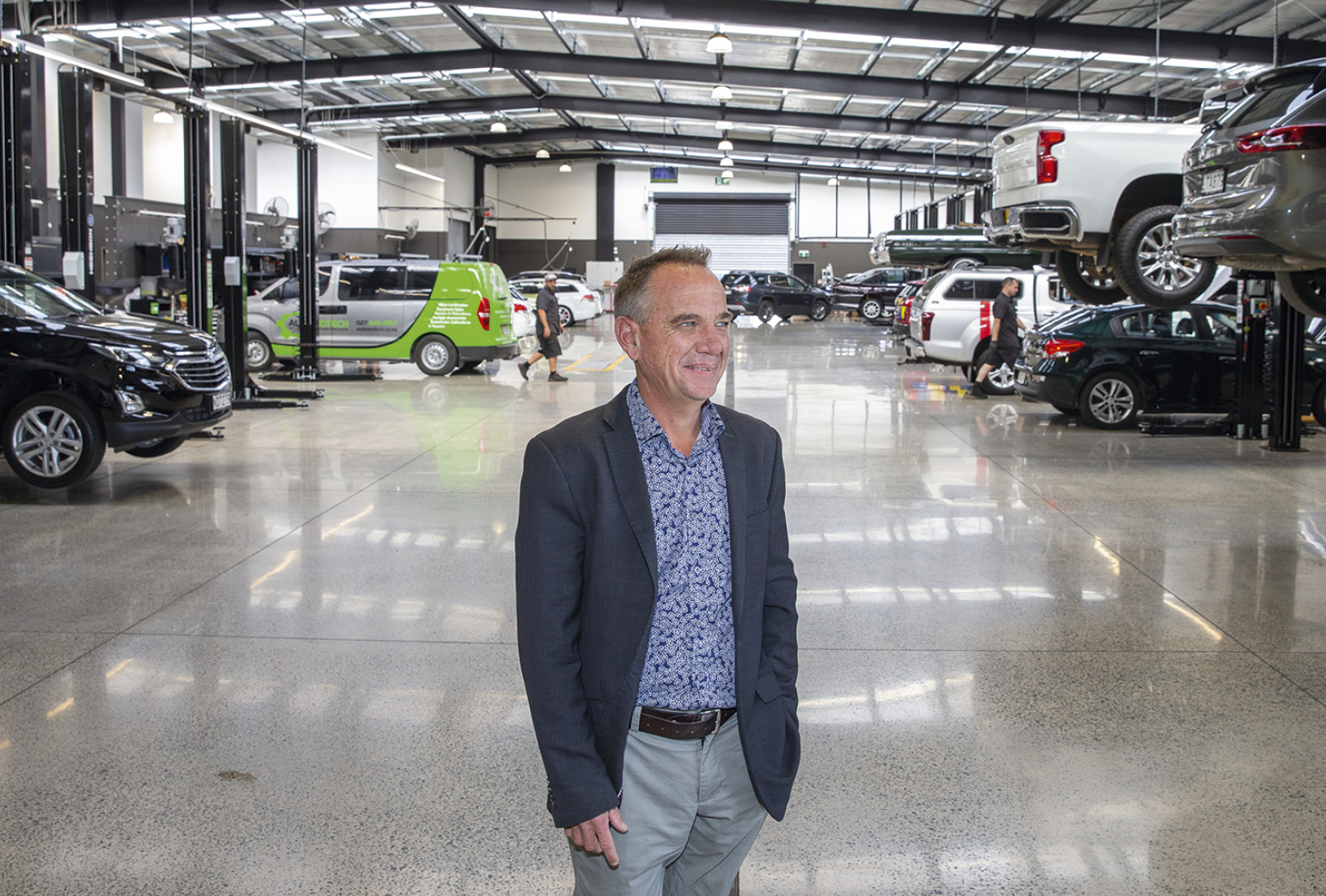 Karl Nation in the light and airy work shop.

Polished concrete floors and plenty of natural light combine to give the showroom an airy feel, and make the most of the vehicles on show, including a couple of classic Chevrolets. Giant structural angled beams with a timber finish also make a dramatic visual impact.

There are touches of luxury and elegance, with photos hanging around the building to show Ebbett’s
93-year history in Hamilton.

This all comes after the directors backed themselves and their staff when faced with both the shock announcement in February last year of Holden’s closure and, within a month, the uncertainty of Covid-19. The directors put the building on hold for just two weeks to work out what they should do next and then the thought process was, “let’s back ourselves”. Nation says, “that was a vote of confidence, confidence in ourselves and confidence in our team. 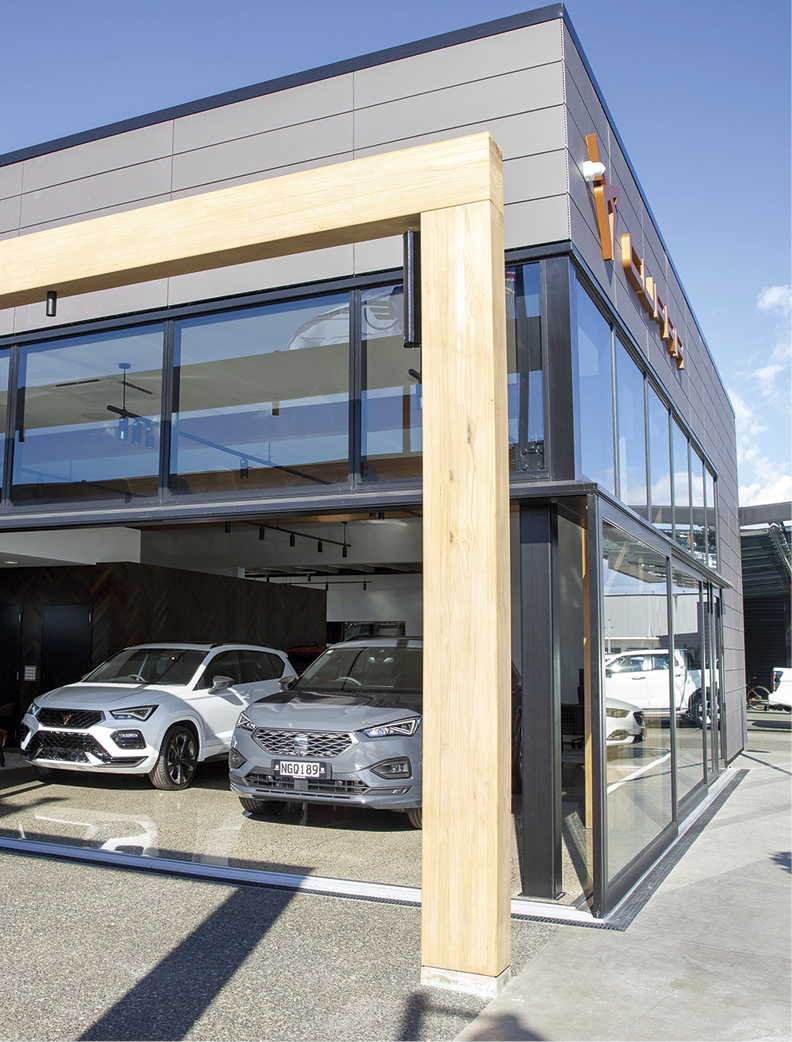 “The building has created an amazing vibe. As soon as we moved in, on the very first day, it just felt right,” Nation says. “The whole team came with us, and the uplift has been amazing.”

As well as the two Spanish marques, SEAT and CUPRA, built by Volkswagen, they have also recently welcomed Isuzu to the group, with the brand’s D-Max utes and MU-X SUVs replacing Holden’s Colorado and SUV range.

Sales of SEAT and CUPRA, new brands to New Zealand, have already benefited from the shift to the new site, now selling in a week what they had been selling in a month.

As for the much-anticipated shift to electric vehicles, with SEAT and CUPRA likely to be catching the wave early, future-proofing includes wiring for chargers already in place, while next door Ebbett Volkswagen already has a fast charge station.

Also on site behind the Ebbett Hamilton building are West Hamilton Auto Refinishers and Tyre Tracks, two well established suppliers who Ebbett have used for decades and who have moved from Frankton.

“You can definitely refer to this now as an automotive base” Nation says, “part of the bigger plan we had from the initial phase.” 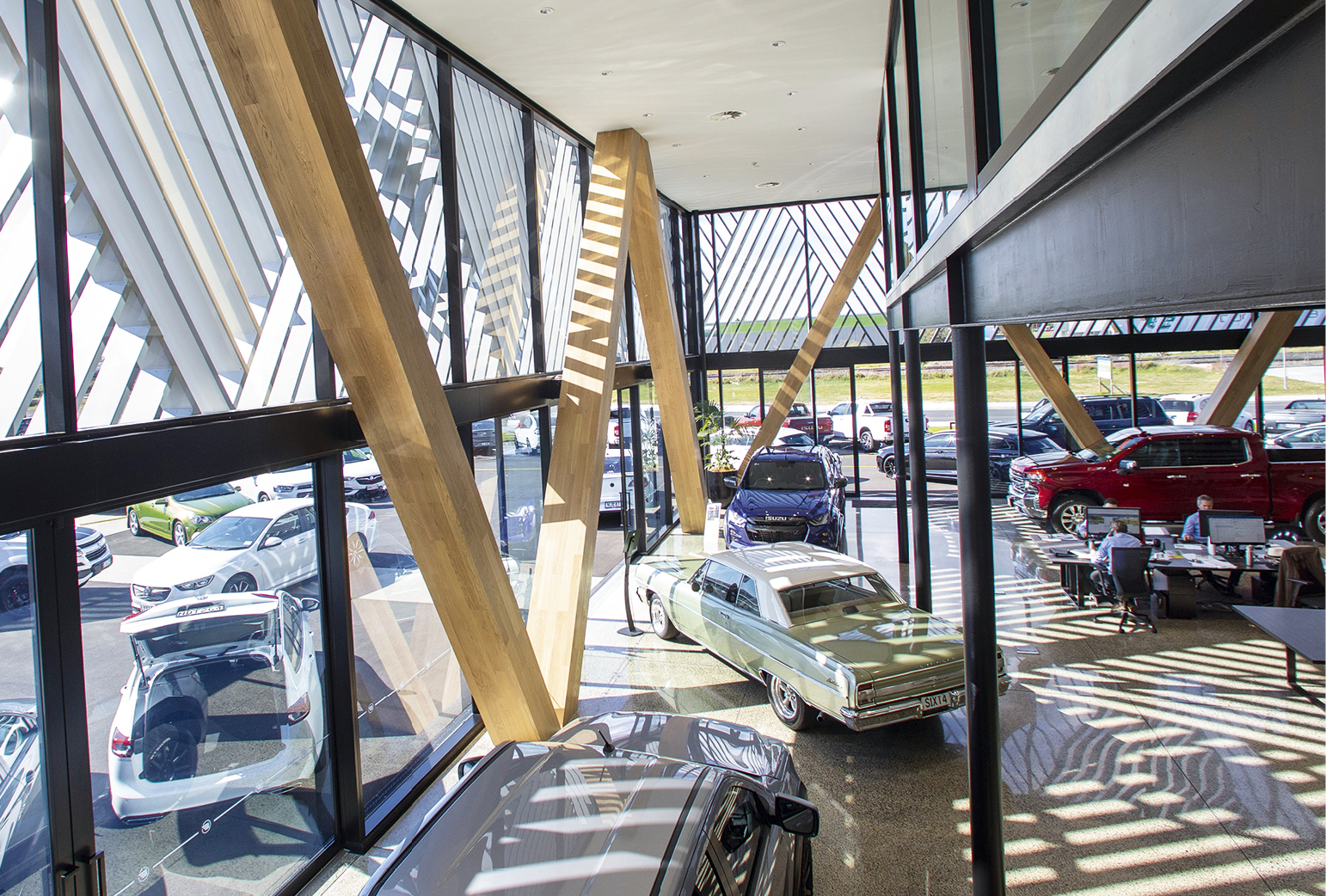 That attention to detail is seen everywhere in the new base that’s more than twice as big as Ebbett’s former Anglesea Street site.  The building was designed by Chow:Hill architect Brian Rastrick, who Nation says has done an “outstanding” job.

He had already designed the new Audi/Skoda dealership on Grey Street as well as the Volkswagen dealership next door to their new Te Rapa site, and Nation says he brought that knowledge to bear, particularly to customer flow.

This translated into touches like an undercover drop-off area for protection when it’s raining, to the service reception adjoining the vehicle showroom, bringing the two areas much closer together. There is also a large driveway boulevard at the entrance off Te Kowhai East Road to make access easy for visitors.

Meanwhile, the light-filled upstairs area is designed like a building within a building, and is where the head office for the Group is based.

“It got a lot of influence from Ben and Walter,” Nation says. “Ben started at Ebbett 50 years ago when he was 16 and has built a few dealerships in his life so brings a real knowledge of how good design can improve customer and staff experience.”

Also contributing to the success of the build were Foster Construction, who Nation says paid extraordinary attention to detail, making sure everything was done to an exceptional standard.

“The Foster team have been absolutely brilliant, very welcoming, open to ideas and of course, a never-say-never attitude.”

The service workshop is also a bright and airy space featuring generous natural lighting, continuing the theme of the showroom.

With the site occupying about 2500 square meters, the workshop has six more bays and six more hoists than the previous premises. There is also an eight tonne hoist so they can service trucks and the likes of the GMSV Silverado.

Two of the bays are set up for (in the future) “express service”, with a one-hour turnaround so customers will be able to drop off their cars and perhaps wander through to the showroom for a coffee while they wait. 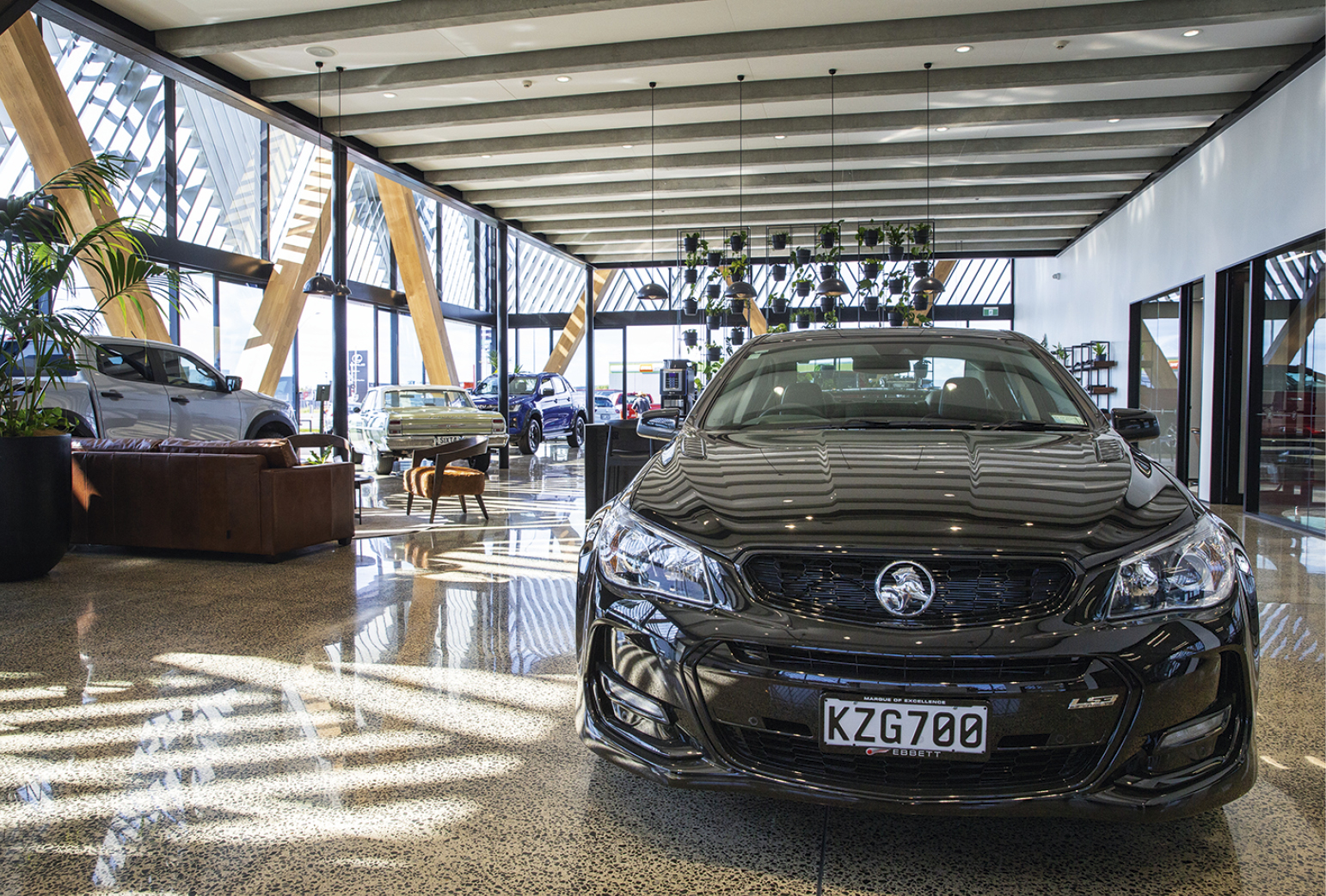 The quick turnaround is achieved by creating more space around two of the hoists, enabling two
technicians per car.

Also, to keep the process moving, the workshop has two carwash bays rather than just one.

Each service bay has a fan, heater, internet access and is highly personalised to the mechanic, including their name and the year they started with Ebbetts.

“A lot of thought went into our workshop, a lot of attention to detail,” Nation says. “We were only going to build it once so it was really important we did it right!”

Given their new Te Rapa location, visitors dropping off cars for a service can also choose to head to The Base nearby, particularly with the newly constructed footbridge over the railway line. They might also soon be able to use e-scooters courtesy of Ebbett Hamilton – another great option from the newcomer making waves at 47-51 Te Kōwhai Road East.