Pacific communities in Hamilton are feeling the benefit as four of their churches are renovated thanks to government funding and the enthusiastic involvement of a city-based recruitment firm.

Renovations are well underway at the first two churches, with $1.6 million in Provincial Growth Fund money providing a boost for communities who could not otherwise afford the long-overdue upgrades.

The project has drawn on Pacific and Māori-owned businesses, in a social procurement process also aimed at assisting those who lost jobs because of Covid-19.

Alignz Recruitment had two weeks to pull together an application in June last year after being approached at short notice by an adviser from the Ministry for Pacific Peoples.

Alignz is a Samoan family-owned business and Felila Asiata’ Feausi, who heads recruitment, says they saw it as a great opportunity to help, knowing that a lot of the churches haven’t been renovated for decades and can be uncomfortably cold in winter and hot in summer.

They quickly organised a meeting with church leaders, which led to a list of four churches.

“We spoke to all the church leaders and they were really interested and really excited. And so we decided to go as a cluster and put in an application,” Asiata’ Feausi says.

They discussed with each church what their wishlist was, then quickly engaged with as many small to medium Pacific and Māori businesses as they could, and discovered a willingness on their part to get involved.

“They wanted to help their communities. And so they were willing to do whatever they needed to get it going and to get the quotes in front of us as soon as possible.” 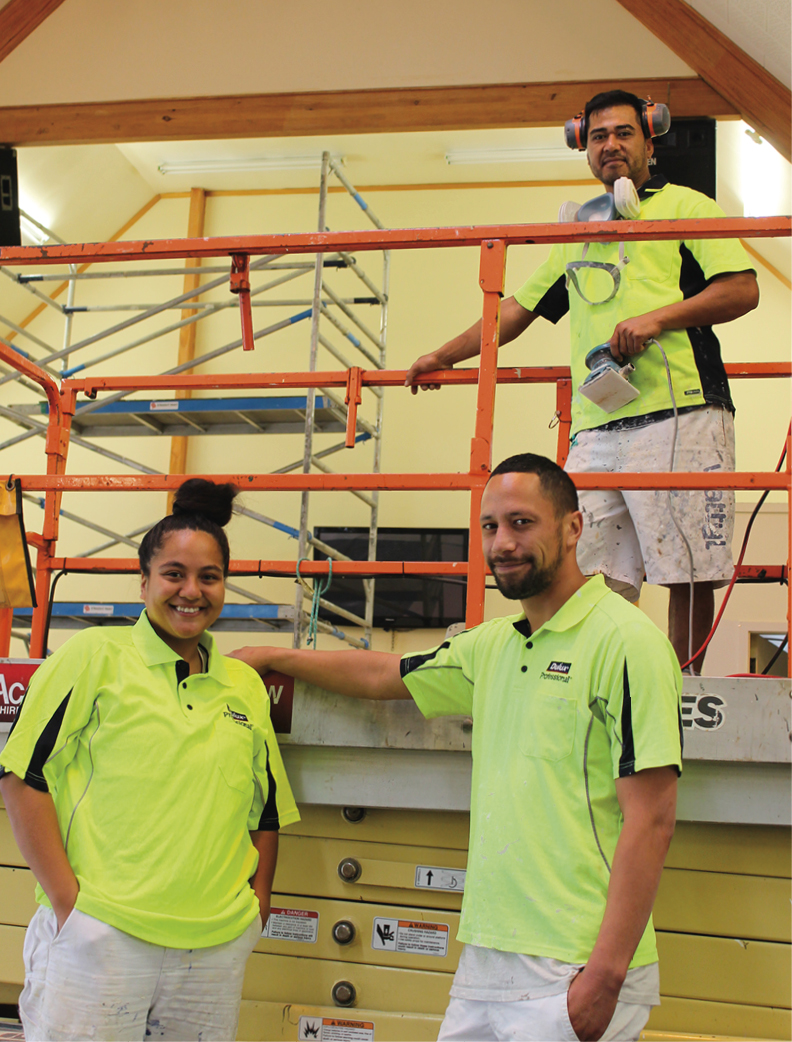 Within about 10 days they were ready to call another meeting with the church members, before submitting an application on July 8.

“So it was pretty intense. But the great thing about it was that everyone wanted to work with us,” says Asiata’ Feausi, who at the time had just returned from 13 years in Australia.

Meta Tyrell, Co-Director of Alignz Recruitment, says it helped that Felila, who is project managing the scheme, had grown up in the Waikato so she and her family were known to the church communities.

Tyrell also says the timing was good for small businesses concerned at work drying up because of Covid, giving them the assurance of a pipeline if the funding came through.

In September they were told the application was provisionally approved, and the funds were finally released in November.

The project is being staged to provide longevity for contractors, with about 20 to 30 working on the sites at any one time. Alignz is helping recruit unemployed people, either those with experience or those with the desire to work in the role, and ensuring they are suitable and ready.

So far, the Samoan Methodist Church in Higgins Road is about 95 percent complete, following interior painting, flooring of the church vestry and offices, replacement of unsafe bifold doors, and replacement of its fence.

Second to get underway, the Congregational Christian Church of Samoa in Greenwood Street is 40 percent complete. It is getting its interior completely repainted, and the chapel, offices, kitchens and bathrooms refloored, while also having a commercial kitchen installed and roofing made watertight, along with some concreting and asphalting work.

They will be followed by the Westside Presbyterian Church, and the Wesleyan Church of Tonga, with the project due to finish around the end of July.

At the Congregational Church, Straight Paint foreman Sio Malaga estimates they have about four more weeks’ painting to go, and says it’s good to be doing work for the churches.

In at least one case, an electrician is installing much-needed air conditioning units at his own church.

Meta makes the point that more than 300 people are getting the benefit from the first two churches alone, and that in turn helps their families.

“The church is their village,” she says. “Anybody new that comes into Hamilton, they’ll find the church first, to join that community.”

Felila says the ministers and congregations are loving the changes. “With our second church, having their whole church, the chapel painted, revarnished after more than 20 years, it’s
just overwhelming.”

Puatala, formerly Alignz Training, is helping organise a STEM-Hub event at Claudelands for 250 senior students from low-decile Waikato schools, aimed at igniting interest in science and maths. The focus is on Māori, Pacific and female students, who will get the chance to engage with Waikato engineering industry experts and role models and experience a “hands-on activity” at the event, co-organised with Kudos, and to be held on March 31 and April 1.