An easy-use tablet to help older people connect them to their families and loved ones has been launched by two entrepreneurs based in Matamata.

It comes after Matamata woman Julie Caldwell discovered there was nothing on the market suitable for her mother.

Julie Caldwell had been supporting her mother, Lois, who was living independently but was no longer able to use an iPad to stay in touch with family.

Caldwell was calling in on her mother, in her mid 80s, twice daily as simple tasks like taking medication and keeping appointments became increasingly difficult. A beautiful wall calendar was of little use if her mother didn’t know what day it was. The solution would be simple, Caldwell thought, a communication device like an iPad but less complicated.

“I said to her, let’s find a new thing for you to use. There’ll be something out there, and we’ll just go and get it, or go online and buy it for you, and then you’ll have all these things fixed.”

To her surprise, she found nothing. “I kept googling this, that and the other, for things for older people or people with cognitive decline, and there wasn’t anything.”

That began a four-year journey with friend and colleague Julie Blackwell which has seen the two accountants launch the nattily named Kitcal to market, aimed at keeping older people connected to friends and family. It helps seniors live independently, with ready contact with family, including through video or phone calls and messages, and easy sharing of photos. Its shared calendar also means families can keep an eye on things from a distance. 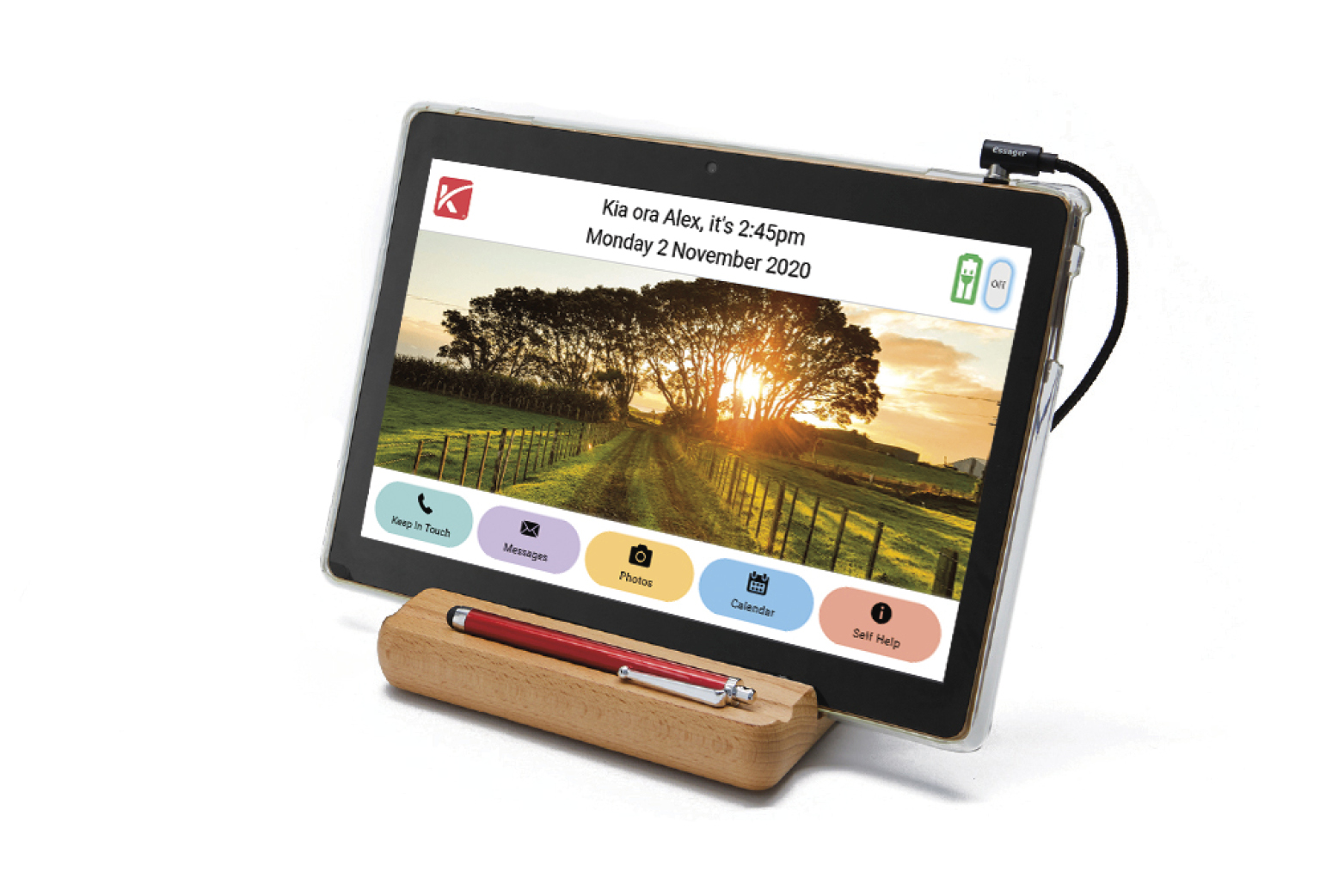 “It just seemed to be something that my mum needed, and therefore other people needed, and it was worth doing,” Caldwell says.

They enlisted the help of an occupational therapist to design the tablet, which comes with magnetised rechargers and wooden stands. Everything was considered, from use of colour to size of font.

The result is a 10-inch tablet featuring five buttons aligned across the bottom of the display, each with a different purpose. Families can download the free app to stay in touch, and can update the calendar, and provide prompts and alerts.

The tablet features a range of emojis rather than a keyboard, and includes the ability for video calls – a late addition when lockdown saw them pivot from 3G to 4G in order to provide the video option earlier than they had anticipated.

Blackwell says they want to help people live independently – without their children, often the eldest daughter, getting run ragged. She has seen the benefit of the tablet herself, having sent one to her grandmother in Canada as that country was heading into another lockdown. Her family were able to download the app and send their grandmother the family photos she cherished.

“It just brings them [older people]into that daily conversation. It doesn’t have to be, ‘Look, we’re in Paris, and this is the Eiffel Tower’; it can be we, ‘Look what we’ve just picked from the garden’.”

Caldwell recalls a moment about two years into development, when their energy was flagging.

She went to her mother’s Christmas lunch at the rest home she had recently moved into. Someone across the table took a photo of them, and they sent it to Caldwell’s two daughters, one of whom lives in America. The daughter immediately responded, a conversation started, and others started sending photos as well. Caldwell’s mother remarked that she would like the photo in her room. Caldwell realised she would have to send it to her printer, go to work to fetch it, and bring it back.

“And I thought, this is ridiculous. I can send it to the US and I can’t even send it to the room three doors down. How crazy is that? There’s got to be something that she can use to get so that she can have them in her room. Why shouldn’t they [older people]have the same sort of social connections that we have just because they can’t work a blasted iPad?

They both laugh. “If only we knew what was coming!”

What was coming was endless discussions with designers and developers and multiple groups working with older people, as well as surveys in both New Zealand and Australia, as they focused relentlessly on functionality. Getting in touch with Callaghan Innovation, and through them with Te Waka, was a key step in getting the business moving, Blackwell says.

They decided they wanted their own hardware. “If there’s a problem with a tablet, it’s our tablet, and we know what the problem is,” Caldwell says.

The two women, who have self-funded the tablet’s development,  import tablets to their own specifications from a factory in China, while staying as local as possible on other fronts. They are using a Matamata software developer, and the stands and cases are made in Hamilton.

The Kitcal comes ready to use out of the box, with a Sim card meaning there is no need to worry about Wifi connections, and using an IoT platform built for them by Vodafone. The tablet costs $690, the plan has two prices according to usage, and the app is free.

“People who’ve had some experience [with similar devices]will obviously pick it up faster,” says Caldwell. “And just from talking to older people who’ve got cognitive decline or dementia, if they’ve already been using it a little bit, then they will retain enough knowledge to use it much further down that pathway than if they hadn’t.”

Along the way, they discovered two tablets in the US market that they had initially overlooked, but neither offered exactly what they were looking for. Unbeknown to them, they were also inventing the very device that an Auckland researcher, Wendy Wrapson, had seen as a solution to the isolation residents could experience in rest homes. She had written to big tech companies with her suggestion, only to be batted away. Having her research was a validation for the path Caldwell and Blackwell were on.

Their marketing focuses on adult children, rather than the parent, and buyer interest is coming from around New Zealand including the South Island. Caldwell says they have had inquiries from families in New Zealand who want one for parents in the UK.

Blackwell says they don’t want the Kitcal to be an electronic photoframe that people buy and never use. “We want it to be useful.

We want it to be exciting. And we know from the feedback we’ve had from those who are using it, it is.”

Sadly, one person who won’t be using the Kitcal is the very person who set Caldwell out on her mission. Her mother died in June last year, just weeks before they were ready to begin testing the device.

“But there’s lots of others like her, and she would have been happy,” says Caldwell.

What’s in a name?

When it comes to the device’s name, Caldwell had a brainwave while on a car journey.  She had, she said, spent ages trying to think up a name for “the thing” that her mother kept asking about. Lots of words came to mind, but none of them felt right. “And then it just sort of popped into my head. And I thought ‘that’ll do’.”

The name, Kitcal, stands for “keep in touch calendar”.

“I actually pulled over on the side of the road up in Patetonga, and I googled it to see if it was anything already.”

There and then, she reserved the name with the Companies Office before continuing with her journey.

“It really is about keeping in touch,” Blackwell says. “And so I think the name really does encompass what we want it to do – it’s that social connection.”

How do you develop a new product? Ask lots of questions and be prepared for the long haul.

“Don’t be afraid to ask dumb questions,” says Julie Blackwell. “We don’t know what we don’t know, we are not tech experts. And we’ve had to ask a lot of questions and just really put our pride on hold.”

“I thought of it as like getting a textbook, and you don’t open the last page because you can’t translate that thing or do that equation. But if you start on page one, and get that little bit, then you just turn the page and get the next thing. And so we did, we just ticked off things we found.

We found the cable clamp [to secure the cable to the back of the stand for ease of use]. We found someone to make the stands. But as soon as we’ve done that, there’s another thing. There’s always another thing.”

“At the beginning, we tried to write this critical pathway list of all the things that we were going to have to overcome and think about that we knew about at the time – hardware, who we’re going to use for the software, how are we going to advertise this, where are we
going to source for this list? And it was too much.”

“We’ve had to stop and do checks all throughout the journey. Because we are so into it, sometimes we need to have a pause and ask somebody outside from us: Is this the right thing? Do we keep going?.”

“Even now people look at it when it’s finished and they’ll say, ‘oh, it’d be great if you could have YouTube on it’. And, ‘wouldn’t it be great if you could do this?’ We must have had those conversations 300 times and all of a sudden it’s an iPad. And we really kept saying to ourselves, stop reinventing an iPad, because there is already one and it’s perfect.”

“This is for social communication, keeping in touch, we had to keep coming back to why we’re doing it, and what it needs to do in order to achieve that. So it was a lot of to-ing and froing.
A lot of time was spent researching, talking to people – lots of informal conversations or group conversations with people, but also online surveys or paper surveys.”