Cambridge is forging ahead despite Covid-19, with growth fed by returnees from abroad and continuing interest from Auckland.

Building is underway on a number of high-profile sites, and growth cells are preparing for development as Lakewood completes its final commercial block.

A three-storey mixed use building on Alpha Street is quickly taking shape post-lockdown, while concrete is also being poured for a new medical centre beside the athletics ground on the town’s outskirts. A further medical centre is planned on Hamilton Rd, and plans are also moving ahead to open up residential growth cells to the west of the town and industrial zones to the north.

Apartments were snapped up at the 86 Alpha St development, with the building expected to be complete by November and the first residents moving in before Christmas.

The build includes 200 square metres of either office or retail space at ground floor available for lease or sale. Also on the ground floor are 32 undercover car parks.

The first floor has three office suites, one of which is already leased. Alpha Streets Development director Scott Massey says the suites will feature high quality fitouts for professional tenants.

The building also features six apartments, one on the first floor and five on the top floor. Massey says they sold quickly after being put on the market about a year ago. One has been taken by a local professional, with the others going essentially to empty nesters.

Cambridge appealed because of the way the town has been growing, as has demand, Massey says. “We already had an idea for a building like this and just happened to find a suitable site, which we are very pleased to have found.” 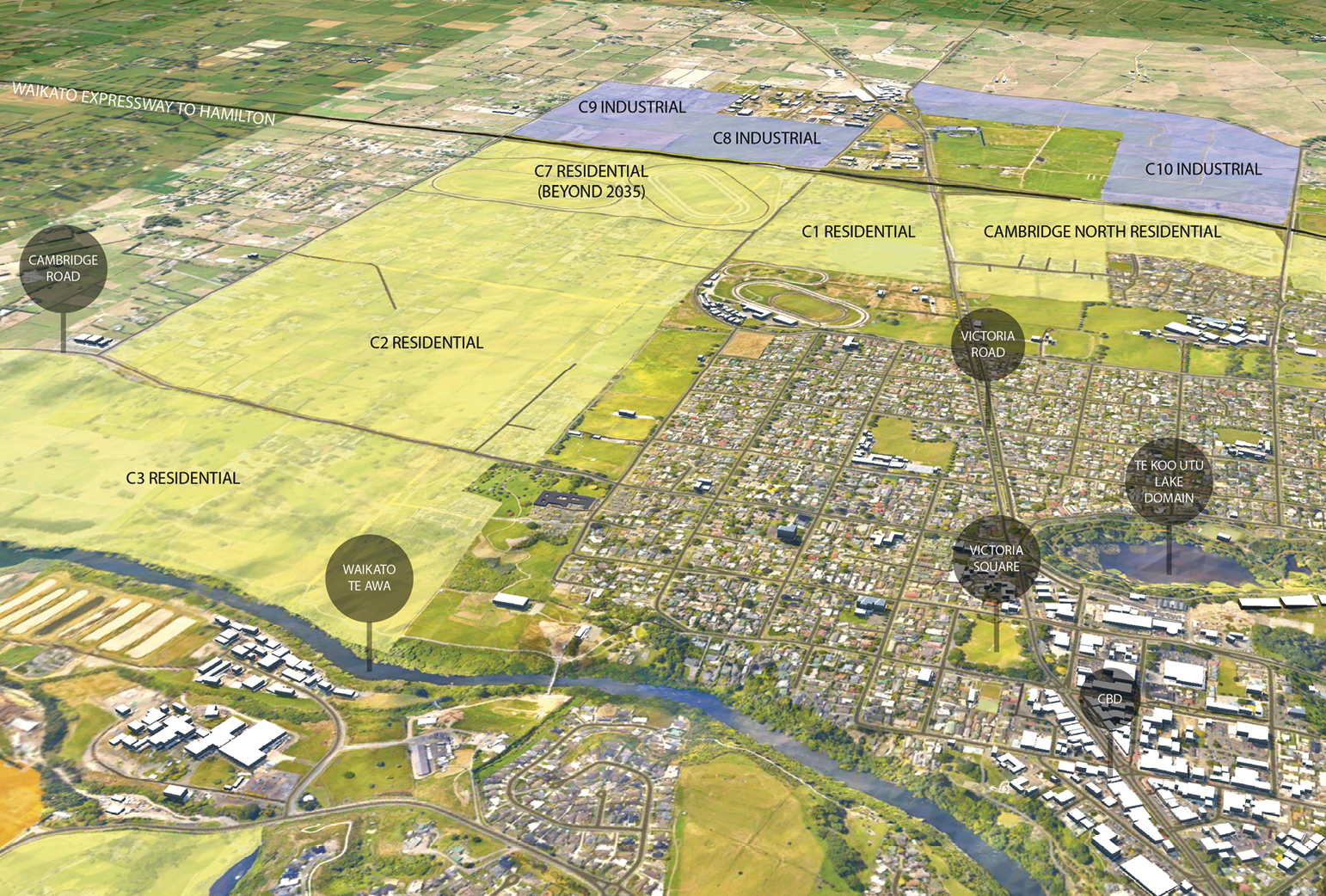 That widely recognised growth potential may help account for Cambridge’s bounceback from lockdown. The town is the highest growth area in the Waipā district, which has largely weathered the pandemic storm, according to provisional Infometrics estimates showing economic activity sitting 0.2 percent per annum higher than a year earlier.

“We’ve got room for growth. We’re a high-growth council and have been for some time,” says  Waipā business development manager Steve Tritt.

“We’ve got all of our planning in place around growth cells [C1, C2, C3] and that’s apparent to everybody. We’ve talked about our growth opportunities.

“We do a good job with our planning and our preliminary discussion, our pre-app meetings. And we’re honest about what we can do and what we can’t do.”

The council has started the first tranche of pipe installations to service major subdivisions in Cambridge following a $2 million contract award to Waipa Civil.

Waipā Mayor Jim Mylchreest said moving on tenders for the water and wastewater infrastructure was a sign Cambridge was back on the move, post-Covid-19.

The infrastructure work would be welcomed by the wider region because it will provide job opportunities and security and would help rebuild confidence in the local economy. Tritt expects the town will see expats returning from overseas during Covid-19, and says they are still getting people shifting out of Auckland.

A further strength for the town is its lack of exposure to international tourism, he says, with domestic tourism accounting for 80 percent of the market.

The drive and weekend market is dominated by Auckland, he says, and Cambridge has also benefited from a boost to domestic tourism as New Zealanders are unable to holiday overseas.

Waipā’s strong economy heading into the pandemic helped soften the blow, alongside its primary sector focus, as essential primary industries kept operating throughout Level 4 and Level 3 lockdown, according to the recently released Infometrics Waipā Quarterly Economic Monitor for June 2020. Consumer spending in Waipā held strongly through the June quarter, sitting in line with a year earlier, the report says.

Despite contracting heavily in April, due to Level 4 lockdown restrictions, consumer spending bounced back in May and June to more usual levels, its report said.

House prices in Waipā were sitting 8.4 percent year on year higher in the June 2020 quarter, outpacing the national average growth of 7.5 percent.

However, Jobseeker Support numbers locally rose 19 percent per annum on average over the last year, slightly above the regional average, according to the report.