Ebbett Toyota and Power Farming are both long-standing supporters of the Waikato Westpac Rescue Helicopter.

The rescue helicopter service touches on the lives of thousands of local patients every year.  Annually the cost of the service is $6.4 million, with a portion coming from the government and the shortfall made up of donations from individuals and partners like Ebbett Toyota and Power Farming.

As two locally owned and operated businesses in the Waikato, they are proud to have collaborated in bringing this initiative to life. The initiative is a campaign with the offer of when you purchase a used vehicle from Ebbett Toyota or used machinery/equipment from a Power Farming Waikato store, the respective businesses will donate $200 to the Waikato Westpac Rescue Helicopter.

At the time of this issue going to print a grand total of $16,600 had been raised. Sharni Weir, Marketing Manager for Philips Search & Rescue, is very appreciative of what these two local businesses are doing for the charity “An outstanding effort from everyone involved! We are so very grateful for the continued support that we have received from both Ebbett Toyota and Power Farming. The funds raised will help us continue to be rescue ready 24/7, 365 days a year.” 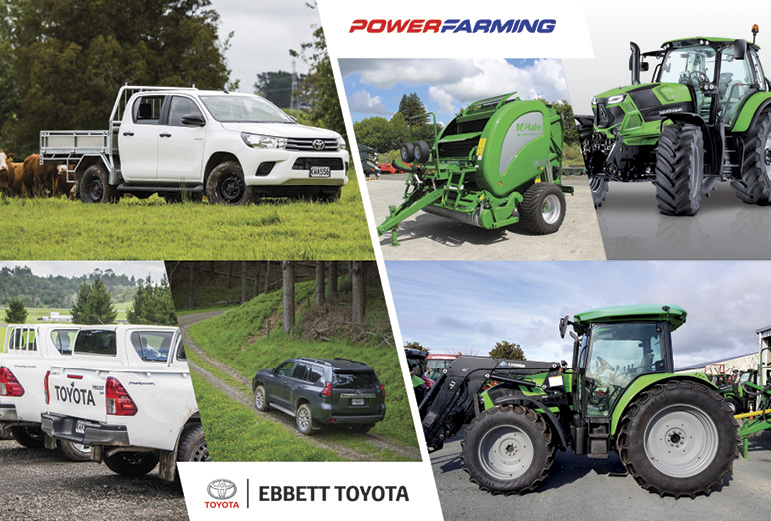 Ebbett Toyota CEO, Richard van den Engel, is right behind the Waikato Westpac Rescue Helicopter, having benefited from the rescue services support before – he was airlifted from Mount Ruapehu ski field after a serious collision a number of years ago. Thankfully in that incident, all involved fully recovered, in part due to the rescue crew’s rapid response. As such, Richard sees the Waikato Westpac Rescue Helicopter as a service that is vital to the Waikato, especially in more remote areas where people can be more vulnerable when things go wrong.

Philips Search and Rescue Trust have recently employed full-time Flight Paramedics, a first for rescue helicopter services. This will mean patients in distress benefit from critical pre-hospital care during their flight. “In a life and death situation it is this speed and agility that makes all the difference, as patients receive vital medical treatment en-route to the hospital,” says Weir. She went on to say “It takes effort and investment to make these significant advancements but we are committed to raising the bar for emergency air rescue services”.

The two Power Farming Waikato dealerships involved in this collaboration, based in Te Awamutu and Morrisville, offer an extensive range of new and used tractors and farm machinery. Both from internationally acclaimed manufacturers such as Deutz-Fahr, Kioti, Kverneland, Merlo, McHale, Maschio and quality used stock from other manufacturers that have been traded-in.

Richard Clarke from Power Farming in Morrinsville says: “Waikato Westpac Rescue Helicopter is invaluable to our community and we’re proud to be a part of making sure farmers throughout the greater Waikato are safer because of this service”. Murray Barclay from Power Farming in Te Awamutu agrees, saying: “Working in remote parts of our countryside accidents can happen, no matter how careful you are. Our farmers are reassured by being minutes from the hospital instead of hours. We’re proud to be supporting this great cause and keeping the Rescue Service flying.”

Ebbett Toyota, who have a flagship store in Te Rapa and two supporting stores in Morrinsville and Te Awamutu, offer new Toyota vehicles as well as a huge selection of top quality used vehicles.  Stock across their three stores includes Toyota Certified, Toyota Signature Class vehicles and other branded vehicles that have previously been used as trade-ins. All three stores have workshops manned with teams of Toyota trained technicians and use genuine Toyota parts and accessories.

Visit www.collab.ebbetttoyota.co.nz to find out more about this initiative or follow Ebbett Toyota on Facebook www.facebook.com/EbbettToyota/ to keep up to date with how much these two Waikato businesses have raised to help the Waikato Westpac Rescue Helicopter.