The inaugural Waikato Business Expo, held at the Claudelands Event Centre in September, was a huge success according to organisers and exhibitors.

Around 70 businesses exhibited at the full-day event, which gave them an opportunity to network and promote their offerings to hundreds of attendees. 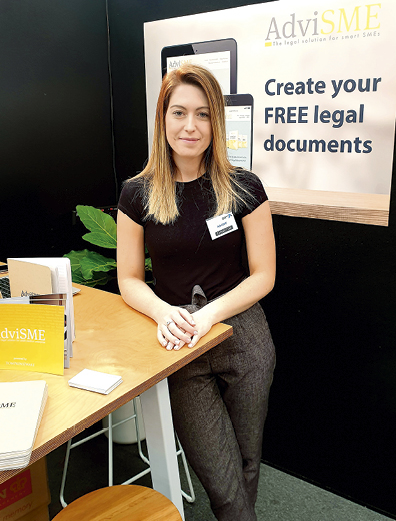 Sharon Giblett from Jigsaw Solutions Group, whose company organised the expo, said initial feedback had been positive, with many exhibitors and sponsors keen to be involved in a future event.

“Exhibitors have many leads to follow up, and there will be a lot of business done in the coming weeks and months from connections and conversations had at the expo,” said Giblett. “Visitors told us they loved the variety of businesses there, and the vibe and energy at the expo.”

The Waikato Chamber of Commerce partnered with Jigsaw Solutions Group to promote the event.

The event was free to attend and visitors could attend a number of business seminars throughout the day.

Keynote speaker Lauren Parsons, an international TedX speaker and workplace wellbeing specialist, began the day on an energetic note, getting VIP guests at a breakfast function out of their chairs with interactive activities.

Sarah Treble, business manager from the Stretton Foundation, and Rhonda Parry, facilitator and director of Kai Puāwai, were at the event to raise the profile of their social enterprises.

Networking with local business people was a key reason to be at the expo. “We are hoping to encourage service providers to join The Good Collective and to embrace the charitable sector,” said Treble, whose organisation is a meta-charity that connects not-for-profits with approved service providers working at a subsidised rate. 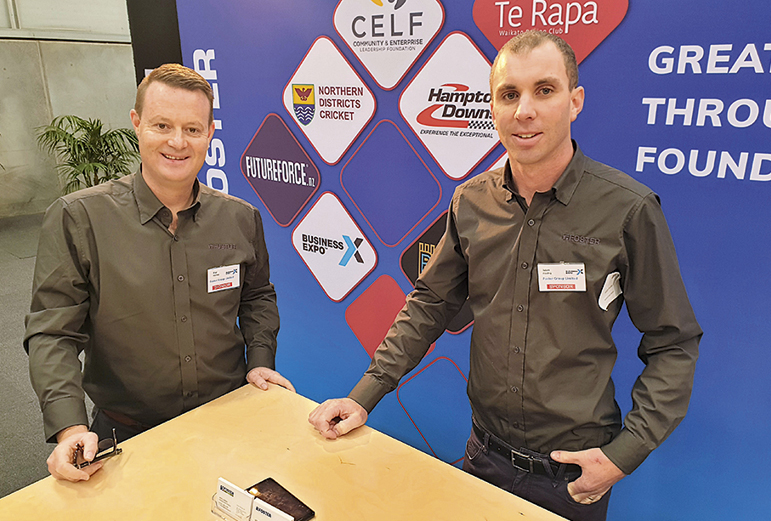 Rhys Harvey and Adam Findlay from the Foster Group.

Parry wanted to raise awareness of their corporate workshops, to help employers and employees build resilience and manage workplace stress.

Chantelle Good, business development manager and director of The Good PA, was fronting a stand with colleague Leah White, the company’s graphic designer. The Te Awamutu-based company offers administrative, bookkeeping and design services to companies throughout Waikato and further afield – typically sole traders and SMEs who don’t have a dedicated staff member in those areas.

“I’m the chair of the Te Awamutu Chamber of Commerce so I really wanted to be here and support this event,” said Good. “It’s lovely to be part of the regional business community and connect with others.”

Zoe Elmer, digital branding and marketing assistant at law firm Tompkins Wake, was at the event to promote their new technology-driven legal service for SMEs, called AdviSME, which launched in May.

“AdvisME is in its infancy so we want to keep the momentum going and get the brand out there,” said Elmer. “It’s hard for businesses starting out, so we are here to talk to them about what we do and how we can help.” 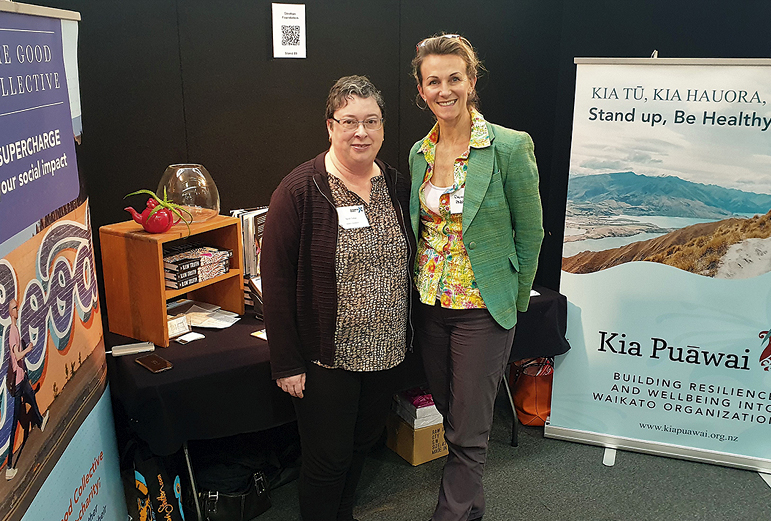 At the Interactionz stand, graphic recorder Andrea Villaflores was hard at work capturing the words and dynamics of the day on a large piece of paper. Interactionz business development leader Lisa Clausen said the social enterprise offers its visualisation services to corporate clients, translating written strategies and other documents into images and infographics. Its corporate projects finance its charitable mentoring and training services. The stand was getting a lot of engagement from business people passing by, which they hoped would translate to work, said Clausen.

Local construction and engineering firm, Foster Group, had a stand at the expo and development director Rhys Harvey said it was important to the company that they support the inaugural expo. “These types of events are very important to the local business community and that’s important to us,” said Harvey. “We’ve been in business for around 50 years in the region and it’s great to see the business vibe is positive and strong, with lots of development and collaboration happening.”

Waikato Chamber of Commerce CEO Chris Simpson said that the event did a great job of bringing together local business people and businesses. “[It] far exceeded our aspirations,” said Simpson, who acknowledged the hard work and initiative of Sharon Giblett and Barry Brown from Jigsaw Solutions Group, who organised and managed the event, and his team at the chamber who worked hard to promote and host it.

Simpson said Waikato’s business environment was strong, contributing $22 billion to New Zealand’s GDP – the fourth largest regional economy in the country. He said there were approximately 55,000 businesses in Waikato, and that around 560 new companies were created in 2018 – contributing to a regional economic growth of 2.7 percent.

He hoped the inaugural event become an annual one for the region. “If the first one was this good, then next year’s will be even better,” said Simpson.

Giblett said they were still in talks about a future event but there was “a strong desire” from exhibitors, sponsors and visitors for a 2020 Waikato Business Expo, and she was already taking expressions of interest.