As Auckland bursts at the seams and its land value rockets, south of the Bombays looks increasingly attractive for many businesses – and Waikato District Council has the welcome mat out.

High-profile development wins have come with the Ports of Auckland inland port at Horotiu, Hynds, Synlait and Yashili at Pokeno and, most spectacularly, the recent announcement of Sleepyhead’s planned lock, stock and barrel shift south to Ohinewai.

An important further boost has come from a partnership agreement signed in August that will see central and local government and iwi working together on the Hamilton-Auckland (H2A) Corridor (see story below).

Waikato District Council has recognised the pressures on its part of the corridor and last year set up a dedicated unit which has quickly built to a staff of five as the district gears for growth.

Business interest is coming not only from Auckland, but also from Hamilton and overseas, with NZ Trade and Enterprise referring inquiries as it recognises Waikato District’s responsiveness, says council economic and community development manager Julie Dolan.

She said the council ensures it is easy to do business with and as a result she gets a lot of calls from NZTE’s Auckland office. “They know we’ll adapt and do whatever it takes, putting the customer at the centre.”

When Sleepyhead came calling a year ago, on the hunt for land not just for a factory but also for affordable housing, Mayor Allan Sanson said it was looking in the corridor south of Te Kauwhata and north of Huntly.

“It all came together in a very strategic place called Ohinewai.”

Sanson said he has advocated for some time for Ohinewai, which has key infrastructure components including road and rail, while Huntly has tight geographical constraints on growth. 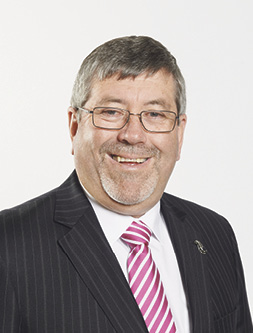 The shift will see Sleepyhead consolidate from several Auckland sites to one in Waikato, covering about 170ha.

“This is not about a factory,” Sanson said. “They’ve got a vision as a family and as a company to help their people into affordable housing.”

That would see more than 1000 homes being built and 1500 jobs, with the possibility of other industries moving in as well.

Sanson said one of the directors, Craig Turner, is also eyeing a big box outlet to attract weekend retail out
of Auckland.

The company has already started cleaning up the site ahead of the construction season. The first factory has to be at an operational level to start at the end of next year, Sanson said.

“The idea is to get a blank canvas and once they get their consents they can start work.

“I understand the plant for the new factory has already been purchased and is sitting up in Auckland.”

He said the H2A Corridor project includes a concern for the revitalisation of Waikato’s river towns, and the Sleepyhead shift will open up opportunities from Ngāruawāhia through to Mercer.

Sanson, who has been in the mayor’s office nine years, said business opportunities come across his desk daily.

“The key project for me was, probably within 12 months of becoming mayor, a deal that was hand shaken in this very office with the chairman of Yashili.”

He said the firm, then owned by four Chinese brothers, anchored the development of Pokeno, building the first dairy factory in the town. Since then it has been joined by Synlait, with Yashili planning further growth.

Meanwhile, there is another reason for Sanson’s enthusiasm for Sleepyhead’s move to Ohinewai. He said the money flowing in through the development enables the revival of a shelved plan to connect the river settlements onto one wastewater treatment plant, with a pipeline connecting the towns from Huntly to Meremere.

The council has just signed an agreement with Watercare to look after its water systems.

Other infrastructure being developed as the district grows is a Huntly train station for the Hamilton to Papakura passenger rail service, due to start in June next year.

Funded by council and NZTA, that project will see the existing platform rebuilt and a bus shelter, lighting and park and ride facility ready by March, strategic projects manager Vishal Ramduny said.

Ramduny said the council is focusing much of the growth around future train stations such as those likely at Pokeno, Te Kauwhata and Huntly, as it sets out to create communities with both residential and employment options.

“We’re trying to be proactive rather than be caught on the back foot.”

Waikato District Council inherited Pokeno’s structure plan from the former Franklin District Council. Ramduny said the provision of social infrastructure hasn’t kept pace with growth and the community is crying out for more.

Waikato District Council has land for a train station in the town and if it can get government funding it would look at developing the station for a passenger service between Pokeno and Pukekohe.

“If there was nothing in Pokeno now, and we were planning now knowing that we’re going to have a train station and bus services, it would be planned differently.”

Growth of the river towns needed to be staged in accordance with the provision of public transport, employment and other network infrastructure like three-waters infrastructure, Ramduny said.

It was important to support communities through the time of change, she said.

Sanson also spoke of getting ahead of the game. “I think there’s a hell of a lot more to come. but it’s just us being able to manage it.”

The H2A partnership signed at Hampton Downs in August builds on the sub-regional Future Proof group, which brought together four councils, iwi and NZ Transport Agency.

A boosted group will now also include the Auckland Council and representation from Auckland iwi as well as, crucially, Government Ministers Nanaia Mahuta and Phil Twyford.

“There’s nowhere else in New Zealand quite like this corridor. The location of a number of communities along two parallel road and rail networks, as well as the country’s longest river, makes it unique,” said Future Proof Implementation Committee (FPIC) independent chair Bill Wasley. 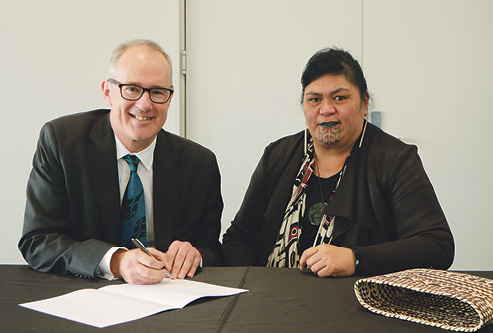 Phil Twyford and Nanaia Mahuta at the signing.

Possibly the biggest-ticket item announced at the signing was the Ministry of Transport undertaking the development of a business case for rapid rail between Hamilton and Auckland, to be completed by April, said Hamilton-based Labour MP Jamie Strange.

The one-hour trip would link the two labour markets, he said. “Hamilton-Auckland will become one labour market, effectively.”

He said Hamilton City Council would also undertake a study into linking the city to its surrounding towns, and possibly the regional airport, by rail.

The key was having government ministers and Auckland representatives, including the deputy mayor, at the table.

• For our earlier Corridor story, go to http://wbn.co.nz/2019/04/03/pioneering-plan-sets-out-blueprint-for-corridor-growth/