Questions like, “What role should Hamilton City Council have (if any) in affordable housing?”

And: “What position should our council have on climate change?”

And, really pushing it: “What’s your vision for Hamilton?”

This is just a sample of posers for potential candidates included in a pre-election report called Shape your City, launched in July.

The reports are required by law; the difference this time round for Briggs rests in the focusing of attention through his questions.

They are grouped under five challenges he sees for the city, including identity and managing growth.

He talks of an ecosystem, in which a tweak to one element will inevitably affect others; the key for candidates is to understand that.

Briggs says that might, for example, see a candidate saying they want to make Hamilton the tech hub city of New Zealand, to invest with subsidies for tech companies, to reduce their development contributions and cut their rates. That of course carries a financial impact.

“All I want them to say is, well, this is how I think we can fund it. And that way the community can understand that there are compromises.” 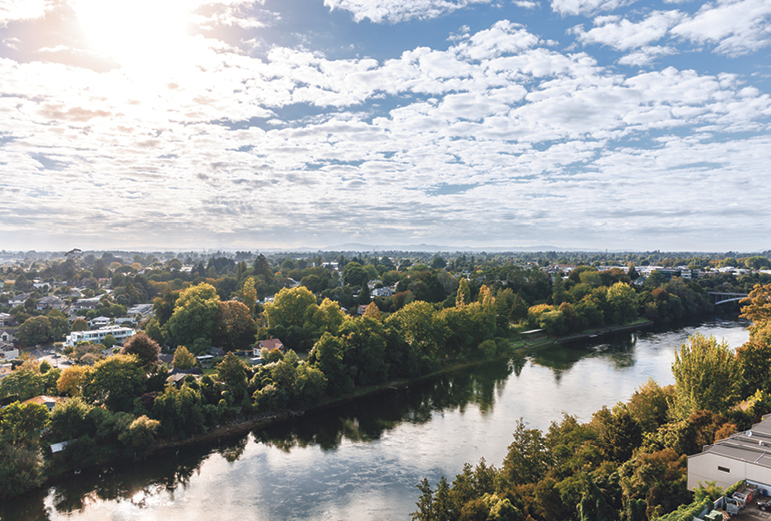 Part of the purpose of the report is to engage, not only with candidates but with voters. Hamilton voter turnout during local body elections has been poor, and the report is not only concerned with sharpening thinking around the election but is also part of a new approach to fostering community engagement more generally.

“My goal is that we get as many individuals with as many diverse views as possible standing so that we can have the community engaged, have some opportunity to really test whether or not these individuals are going to stand up and actually shape the city in the way they are doing it.”

The question about the vision for Hamilton comes in the identity section, which Briggs says is relevant given the number of people migrating to the city – to the tune of about 40 a week. A large chunk of those come from Auckland, he says, and another chunk from smaller towns, while he is seeing a slight drop in migration from overseas.

“One of the things that’s interesting though is we have a population of about 170,000 but there are a significant number of people that move in and out every day as well. They don’t get a chance to vote unless they live here but we would still like them to be informed, because the debate we’re trying to create involves everyone.”

Wherever the people are coming from, it pushes growth towards the top of the agenda for the city.

Growth was a big part of the 10-year plan discussions which the pre-election report is, by law, based on. Growth means cost. That saw the city council pass a $2 billion capital programme to support the existing city as well as growth infrastructure, Briggs says.

To that end, one of the possibly more provocative questions in the report is: “Are you comfortable with annual rate increases of 3.8 percent through to 2028?”

Importantly for Briggs, that is immediately followed by “If not, what do you propose?”

The 3.8 percent is to ensure the council has the capacity to fund growth.

“And the outlook is for longer than the 10 year plan. We want to make sure that we don’t end up in a position where we are constrained in year 11 by the stuff that we haven’t considered, so we do a 30 year infrastructure plan to cover that off as well.”

When the 10 year plan was being finalised last year, there was some well publicised disgruntlement on the part of developers over the contributions they were facing.

It’s questionable, however, just how many developers carried out a threat that was in the air to quit the city, and Briggs describes council relations with developers as good.

None of that is to say solutions are simple. Even if development can be taken off a council’s books via special purpose vehicles, someone has to pay. And who should that be?

That is where the conversation needs to change in the community, Briggs says. “The developers are saying the costs are too high. Well, the costs are what they are; the challenge is, are there are other benefits in putting that development ahead that would make sense therefore for the ratepayer to contribute towards it?”

Council runs a calculation, based on who benefits when. Briggs uses the example of a bridge.

“Let’s say we put a bridge into a new growth cell and what we’ve got to identify, is that bridge required because of the growth cell or does it provide some value to the existing residents to give them other ways of alleviating congestion? So let’s say its 50:50 – 50 percent for growth, 50 percent for congestion.

“Fifty percent for the growth goes to the developers through development contributions; the 50 percent for congestion goes to the existing ratepayers at that point in time.”

He makes the point that Hamilton is providing city-standard services, which comes at a cost.

That saw, for instance Visy setting up at Titanium Park by the airport rather than in Hamilton.

The upcoming election sees August 16 as the cutoff for candidates to enter the race and October 12 as the final date for voting.

For those thinking of standing, Briggs says the opportunity is to represent their communities and make a difference.

“There’s probably an opportunity for businesses to get on board and bring some real life experience to the table around what the impacts of council’s decisions are.

“If they’re smart, ambitious and wish to make Hamilton the greatest city in New Zealand, then go for it.”

Richard Briggs has been appointed to the National Construction Sector Accord steering group as New Zealand looks for ways to build resilience in the construction sector after some high-profile company failures.

The steering group is made up of 24 industry and government leaders with the aim of developing a transformation plan by December.

Briggs is the sole council voice at the table after being appointed by Local Government NZ.

The intention is for local government to get the value out of a robust construction sector, but also for Briggs to feed back into the local government sector about things that it needs to change.

“For example, you could argue that strong local government procurement processes have done a great job of pushing risk away as well as keeping margins low which is probably part of the reason why some of these construction firms have found it hard to continue to operate,” he says.

“From a council point of view, we want a vibrant, successful construction sector that gives us the opportunity to have choice. It’s one of the challenges we have at the moment – sometimes we go out for tender and only one tender comes back.”

The group’s comprehensive approach will incorporate innovative ways of procuring, looking at different ways of contracting, certification of products, health and safety, and risk, with Briggs on the building regulations workstream.

“It’s definitely exciting and I’m really pleased to be on it.”

We want to play our part in the local body elections, so we are inviting you to have your say. We’ve got a question of our own. It’s simple: if you are a voter, what do you want to see from your next council? That could be the city council or your district council, depending on where you live – we cover the region. Just make sure you indicate your council. Email richard@wbn.co.nz or, better still, jump in and join the conversation on our Facebook page where you can also be in to win a Helm voucher. We will publish a selection in next month’s Waikato Business News.

Or, if you are a candidate, email a 150 word statement to richard@wbn.co.nz for us to publish in the next Waikato Business News. This is your chance to reach out to our business community – we go to business PO boxes throughout greater Waikato, and are also available at some distribution points. So think about exactly what you want to say to business owners in your area. No photos, just words, put “Candidate statement” in the subject line, and make sure you indicate which council you are standing for.

Our next Waikato Business News goes to print on August 21, so you will need to get your candidate statement to us by August 16.