Hamilton Airport is to undergo a  multi-million dollar upgrade to its terminal buildings and carpark as passenger numbers grow strongly.

The work, scheduled to start in early 2020, will take 12-18 months and will see a complete refurbishment of the terminal.

The project will mean an improved departure area with new furniture, flooring and interior colours. It will feature more dedicated workspaces with charging units and digital display units to showcase local history, innovation, tourism and events. The new look will include artwork from Waikato-based artists as well as living green walls.

It is the first major upgrade to the terminal in 14 years, and Waikato Regional Airport Ltd (WRAL) chief executive Mark Morgan said it was being done with a view to the next 20 years.

Stage two of the project is likely to include improvements to the terminal entrance, more landscaping and trees, a pedestrian-friendly plaza and an improved drop-off area for passengers. Rental cars will be shifted out of the main carpark, the taxi stand will be moved and the road entrance into the airport reconfigured and improved. 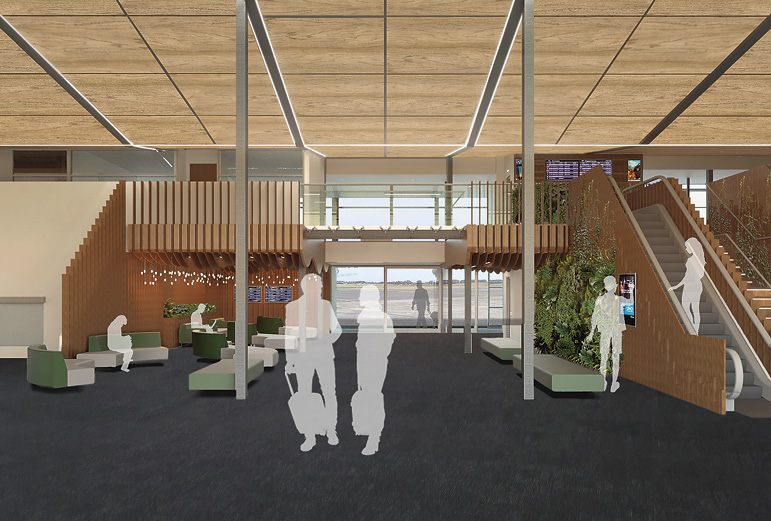 Morgan said the investment was being made on the back of strong growth as well a “very solid” forecast increase in passengers.

The terminal upgrade also coincides with a picture of solid regional population and economic growth that shows no sign of abating, and has contributed to airport use.

“Over the past three years we’ve had a 24 percent increase in passengers through the airport. On all routes, passenger growth has already outstripped the new capacity that was made available over the past 12 months, which is phenomenal,” he said.

During 2018 passenger numbers on direct flights from Hamilton to Christchurch, Wellington and Palmerston North grew by nine percent while overall seat capacity grew by three percent.

Hamilton is also ahead of numbers nationally, Morgan said. In March 2019, Air New Zealand recorded a 4.7 percent year-on-year increase in domestic passengers. Hamilton Airport recorded a 10 per cent increase over the same period, and is nearing 400,000 passengers annually.

“Many peak flights were leaving Hamilton absolutely full which indicates there is demand for more seats. So the numbers are very strong and, given some of the low fares now available out of Hamilton, we’re absolutely confident that if further capacity is added, passenger growth will continue.”

Morgan said his team was working with airlines to advocate for more flights from Hamilton.

“We’re expecting more capacity between Christchurch and Hamilton over the winter. We’d also love to see better connections through to popular destinations like Nelson and Dunedin but those are business decisions for Air New Zealand to make and we respect that.”

During the refurbishment and terminal upgrade there would be minimal inconvenience to passengers and all flights would operate as usual, Morgan said.

As part of the project, the airport will undertake structural strengthening work to meet new building code standards.

The project would be funded by WRAL without financial support from its five shareholding councils, which would continue to receive an annual dividend from the airport

Tenders for early contractor involvement were already out and he expected a main contractor to be appointed by mid-June.

In the long term, the connection to Auckland airport could also potentially be strengthened through high speed rail.

Morgan noted a makeover of the Hamilton Airport Hotel announced in February was well underway, and would be complete by Christmas under the management of family-owned Jet Park Hamilton Hotel.  When complete, it would offer four-star conference and accommodation facilities on the airport’s doorstep.

Retail is likely to be developed in the area between the hotel and the airport entrance as part of the airport’s longer term master plan.

WRAL bought the 63-room hotel in January 2018 as part of its strategy to grow non-aeronautical revenue and Morgan said it would become a cornerstone of that part of the company’s business.

“Both projects are hugely exciting for the local economy,” Morgan said. “It’s a real sign of confidence in the region.” 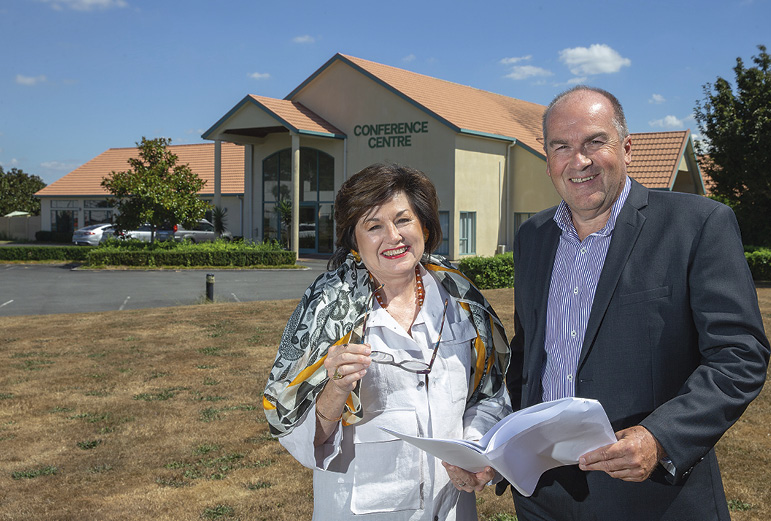 Jet Park owner Liz Herrmann and Mark Morgan. The hotel upgrade is due to be finished by the end of the year.

Meanwhile, all of the land available as part of stage three in the central precinct has now been sold and earthworks are visible from SH21 as WRAL develops the nine-hectare southern precinct. That includes building John Spencer Way, named after the outgoing board chair who finished at the end of April.

With stage one scheduled for completion by the end of July, 4.3 hectares are already presold.

Morgan says the land sales are contributing to capital projects including the terminal upgrade, but also says that the airport will retain extensive land ownership.

WRAL has about 330ha, with about 30ha of land for sale in Titanium Park, 180ha for the aeronautical business, 15ha in investment property, including the hotel, and 100ha in the northern precinct, which is a farm it bought a year ago.

“We’re actually selling no more than about 10 percent of our landholding, which is non strategic to our aeronautical business.”

A further 40 ha of industrial and commercial land may be developed at the farm’s northern end depending on the outcome of an application for a private land change.

Earthworks are underway at the southern precinct.

“As Peacocke residential comes on stream over the next few years the farm will be the nearest potential industrial commercial development that could also be a place of employment south of the city,” Morgan said.

He welcomed the introduction of the Hamilton to Auckland Corridor plan, which is an overarching plan for growth for the next 50 years. It is likely to improve the airport’s connectivity to Hamilton, possibly through rail as well as the development of the Southern Links.

In the long term, the connection to Auckland airport could also potentially be strengthened through high speed rail.

Airports have to take a long-term view, Morgan says.

“Hamilton airport is geographically and strategically well placed to take the opportunities over the next 30 years.”