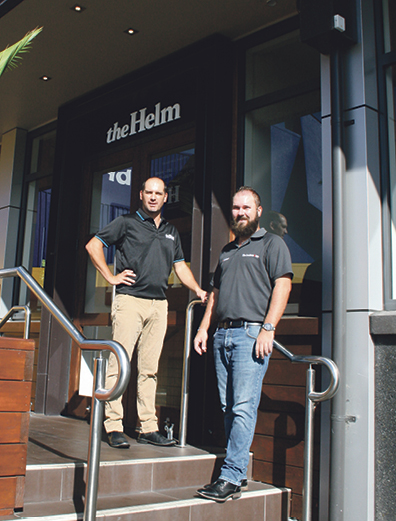 Always looking ahead for the clear wind is what all top helmsmen do while trying to achieve the best for their vessel against serious competition.

And while not on the water, Joe Te Paa and Cam Weight are achieving top results steering The Helm Restaurant and Bar to greater success year on year.

Celebrating its 10th anniversary in the stiffly competitive hospitality sector in Hamilton, The Helm, as it is affectionately known, has become everybody’s local.

A little more than 10 years ago well-known Hamilton entrepreneur John Lawrenson and Joe Te Paa had a ‘light bulb’ moment together that became the embryo of ‘the pub in the car park.’

Their first thought was to utilise the corner which had housed the well-known Pizza Hutt. But, no, that wasn’t to be.

So, they set their sights on the spot in the car park, almost right across the road.

Plans were drawn up, consents requested and granted, and Downey Construction was called in to turn the first sod for what became The Helm Restaurant and Bar… Mark1.

After migrating south from the friendly North to study at the University of Waikato he was two years into a degree in sport and leisure studies and tourism management when he moved into ‘hospo’ at the Outback.

Joe, had at least six years in the hospitality business locally, working with John Lawrenson, who already had a stable of well-known eateries and bars as well as Richard Bates of The Bank fame.

He says he was fortunate to have quite a few ‘seasoned’ hospo heads as managers to assist with his moving forward in the industry.

He worked the floor and the bar as duty manager at Furnace Restaurant and enjoyed looking after customers and ensuring core things were in place.

Meanwhile Cam was building moveable homes as well as working at Iguana Restaurant.

The Helm had been operating six months when he joined Joe. Now, nine-and-a-half years down the track Cam is a director and shareholder of The Helm but spends most of his management time at the Lookout in Church Road, Hamilton North.

You can count a staff of 30 on the books at The Helm. Normally there are 10 on hand which jumps to 14 when a big game is on at the stadium.

Joe is impressed with the 9-5 workers who are still keen to work bar and dinner service after they finish their normal jobs for the day.

Staff are well looked after and Joe and Cam make certain they are keen and have learned enough to step in when it’s their time.

Joe says it’s vital to ensure their keen troops are ready to take over. 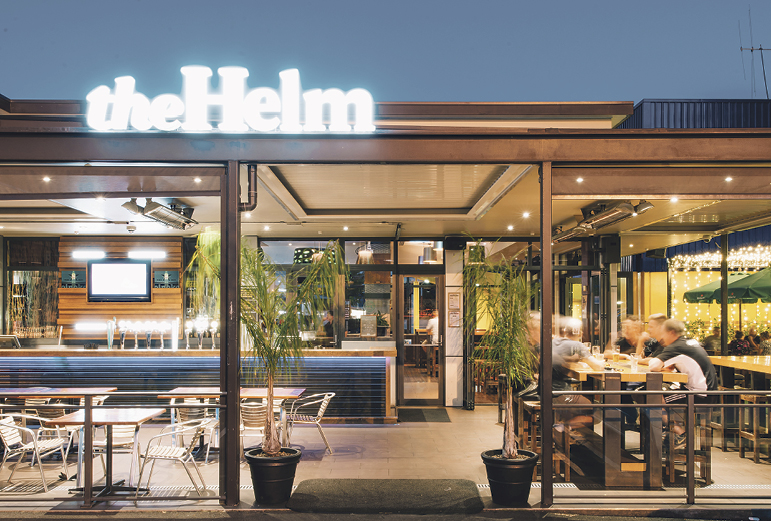 It’s creating an opportunity for the next generation.

“Getting the core things right, and by that I mean looking after customers and joining them for a chat when they call in for a drink,” he said.

The Helm today is substantially bigger that the “Mark1” version of 10 years ago.

“Right from the start my father and his partner Mairee have been involved.

“Dad has always been our maintenance guy and actually built the stage and booth seating inside as well as all the tables in the garden bar,” said Joe. “My wife Erena was fantastic and I doubt that without her tremendous support and the sacrifices made from all parties we would be where we are today.

“We all put in long hours in the early days and really set the business up well.

“In the past 10 years we have needed to extend the bar, and we’ve tiled large areas inside and covered an outside area as well as installing a classic tree-sheltered garden bar.

“There’s nothing quite like it in Hamilton,” he said. “More space means more people to be managed and looked after.

“This is what hospitality is all about.

“I still work on the floor and this keeps me in touch with the customers,” he said. “We have groups who have been coming here since the bar opened.

“They have their own corners and some drink with their friends every Friday, some on other days. It gives me the chance to get around and talk to them all as often as I can. And I introduce them to staff so there’s a good feeling all round. 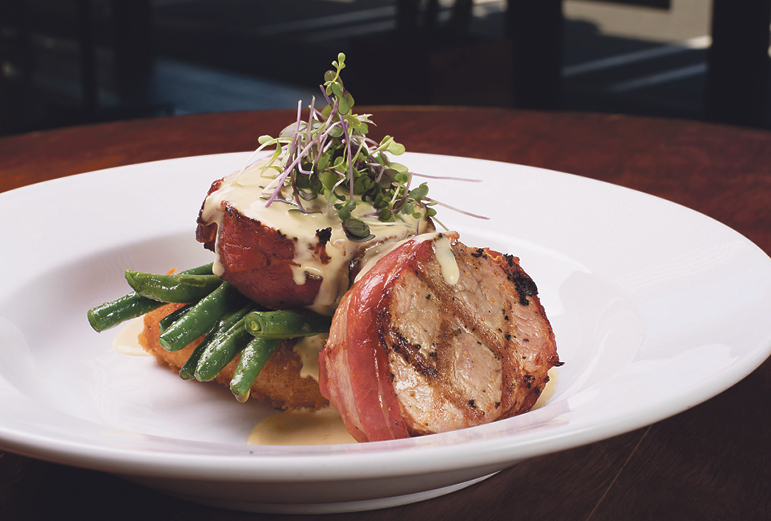 “I get feedback on the menu, on drinks, on many aspects of the business as they see it and it helps Cam and I ensure we are providing the best of the best,” said Joe.

The Helm is growing every year and Joe believes it is because they don’t change things all the time.

When something meets the approval of the great majority of clients, then why mess about with it, he says.

“The building has held up well over the past 10 years, but it’s time for a refurbishment.

“The restaurant gets very busy when special events are on in town. In our second year we had the V8s and it went crazy.

“Then there was the All Blacks South Africa match in 2009 in the wake of the earthquakes in Christchurch.

“When the Fieldays are on the motels down Ulster Street to Te Rapa are all full and their clients arrive in droves. Many of the motels accept charge-back which helps draw customers to us.

Being so handy to the stadium is also a bonus for The Helm as many call in for pre-drinks and a meal before the match.

“We have an elderly couple who have been booking their table for two in the corner for years, before they stroll off to the stadium to watch a special match.

“And it’s always super-busy if the Chiefs are on a roll,” said Joe.

Joe and Cam are very strong when it comes to community support. Each year The Helm runs a charity golf tournament and they change their charity each time.

“We give away vouchers to raffle and we have assisted with Hospice, Helicopter Rescue and Child Matters.

They sponsor sports teams including rugby, hockey and football.

“We run quiz nights at The Helm,” said Joe. “We even got one up and running for a dance group.

They both enjoy their golf and have assisted with a Lions golf day.

So, what’s next for Joe and Cam?

“Finding the next us.” They both agreed.

Being married with families, both are keen to spend more time with the people who mean so much to them.

So, they are not sure yet what the “next us” will be but it will include more family time.