Built by Waikato Construction Management Limited (WCML), the company took care of the entire build process; from concept design through to engineering, council consent to the final build. Ravi says Trina and Gary White from WCML were great to work with and within a day of their first conversation Trina had a design concept ready for him to view.

“She turned up the next day with a mocked up 3-D plan and we were able to virtually walk through the building,” he says.

The build started in May 2021 and despite the challenges of Covid and lockdowns, they were ready to move in at the beginning of November. 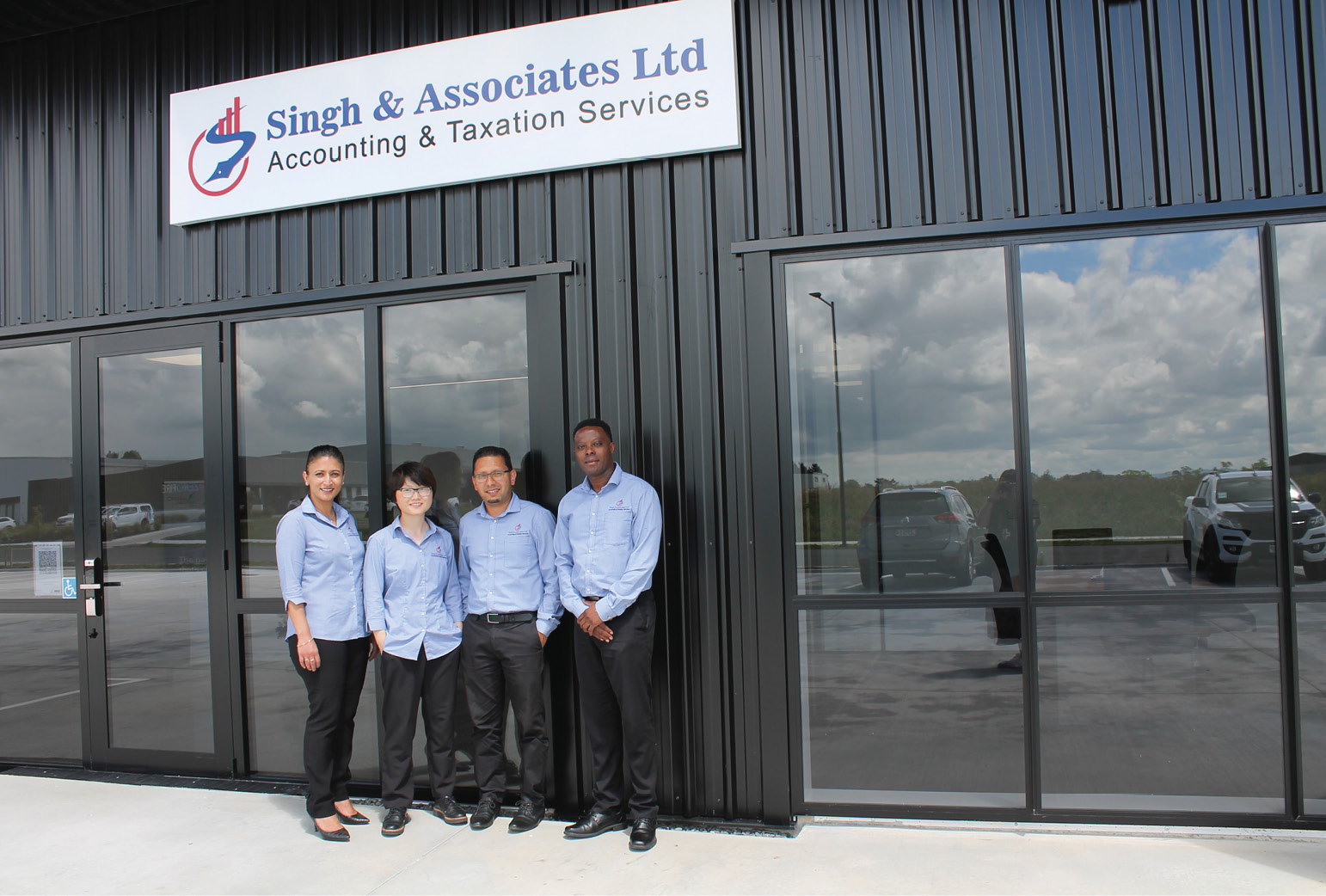 “I really liked that there were no surprises. Everything was laid out in a fixed price contract.

“Obviously we’ve gone through a rough period for construction with the lockdown, so I believe we were blessed to have them.”

The new space is a far cry from the cramped offices the team of five at Singh and Associates were used to, with a larger office space there’s room for an office for each staff member. And there’s a private courtyard for coffee and lunch breaks or team meetings in the sun.

Centrally located in Titanium Park subdivision, the building already hosts two tenants – Sunlight Tech and Limnotrack – as well as Ravi’s office. Plus, the Busy Bean coffee and food cart, due to start in January 2022, will be providing much-needed lunchtime treats for the growing businesses in the area.

Ravi says the tenants were already signed up prior to the build’s completion thanks to NAI Harcourts agent Sean Stephens. It was Sean who introduced Ravi to the land. He had approached NAI Harcourts about another piece of land but Sean found out it had gone to contract on just as they were checking it out.

Not put off by his first viewing being sold from under his feet, Ravi felt confident with Sean’s ability to find the right piece of land for him.

When the land near the airport came on Sean’s radar, Ravi jumped at the chance to purchase the 2228 square metres of prime real estate.

“In 2020, we decided we needed more space for our staff and more storage. Sean was a great agent to work with and helped us to secure a property locally,” Ravi says.

The growing industrial estate near the airport is abuzz with small industrial users, plus national and international businesses, and is becoming a real centre of business.

From modest beginnings, Ravi is proud of his business and owning a new commercial building, tops off his accomplishments.

He spent many years working for chartered accountancy firms in Te Awamutu and Hamilton before beginning work in his Uncle Jagdishwar Singh business and later acquiring the practise in 2012.

He started as a one-man band with his wife Arti working in the business part time and took the business from 250 clients to 1200 clients from all over the country.

His staff has grown to five, including Arti who now works full time, and client managers Anjana Prasad, Evans Chileshe and Mengdi Niu.

Ravi’s says he’s now working with the children and grandchildren of some of his original clients in all manner of businesses; from small scale cleaning franchises, bakeries and restaurants to dairy farmers, kiwifruit growers and multiple petrol stations franchisees.

As a member of Accountants and Tax Agents Institute of New Zealand (ATAINZ) – a recognised professional institution – the staff at Singh and Associates are required to undergo extensive initial and continuous training. This ensures that the firms’ knowledge base is kept up to date and that your accounts are prepared to the highest standard.

A registered tax agent with the Inland Revenue, the company has maintained longstanding proven record and a good relationship with the agency and continue to meet 100 per cent filing percentage every year.