The warm weather is on the way and Raglan Gelato is delivering the taste of summer packed in a tub.

The creamy creation of foodies Lars and Hanna Allouard, the couple have been on a learning journey in their foray into food production.

No strangers to trialing small food enterprises, last year they dipped their toes into making natural dried snacks made from seasonal fruit as Blissful Bites, which met with some success.

“We had the idea and turned it into a reality quite quickly. We really liked the product but some of the things didn’t really take off. We had lots of positive feedback but it proved not to be everyone’s cup of tea,” Lars says. 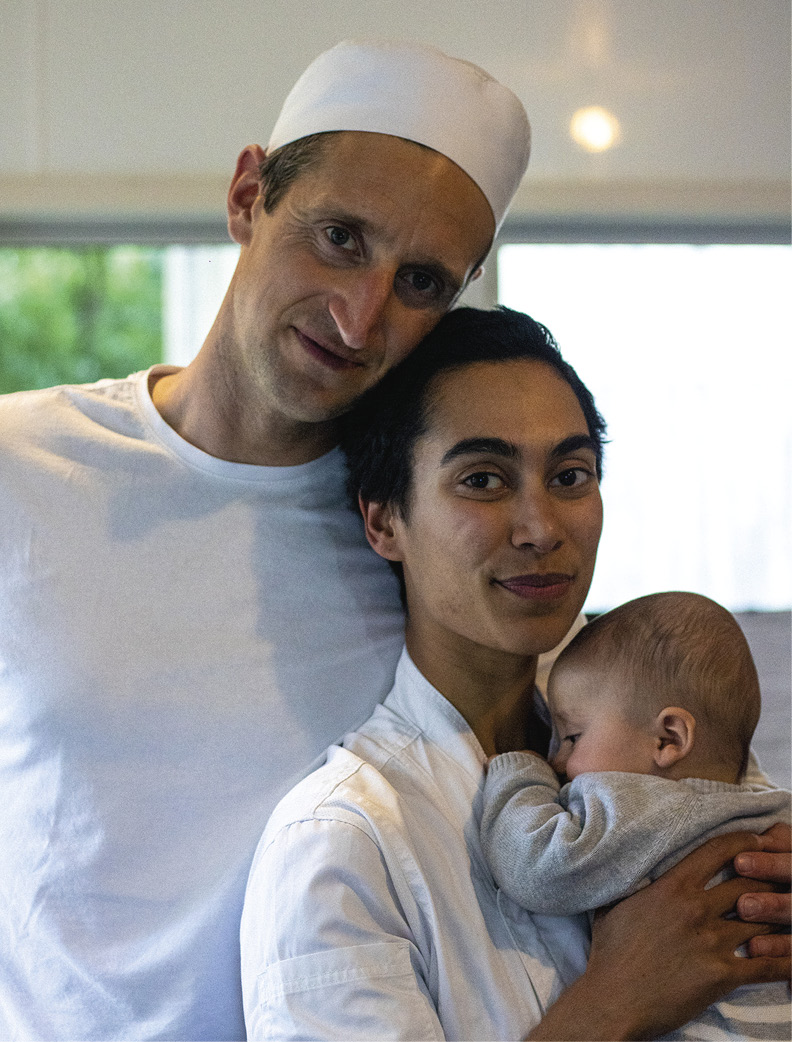 After a year of Blissful Bites’ production and decisions to be made about investing in a larger dehydrator, the couple decided the business wasn’t worth the investment. Still keen to make a go of self-employment, they made the decision to take the leap into gelato making and realise a long-term goal of Lars

“Making gelato is a very old dream of mine. I remember 12 years ago on a trip to Wellington and I bought a shirt in an op shop. I thought to myself that it looked like something an ice cream vendor would wear,” Lars laughs.

By June this year, Lars was researching and searching for a gelato machine, and with little luck in New Zealand Lars headed to Australian online marketplace Gumtree.

“I was lucky enough to find a secondhand machine from a pizzeria/ice cream parlour that was closing down. They are incredibly expensive, about $55,000 new, so I was happy to buy second hand.”

The couple used their personals savings to purchase the $15,000 Italian-made Bravo machine and had it shipped to New Zealand.

By October, they were making their first batches of gelato in the machine at the commercial kitchen at the Raglan Old School Arts Centre.

“The first few batches were far from perfect. You have to get used to the machine and all the settings. There was a lot of trial and error; sometimes it was too frozen or too runny.  Quite a few batches went down the drain,” he laughs. 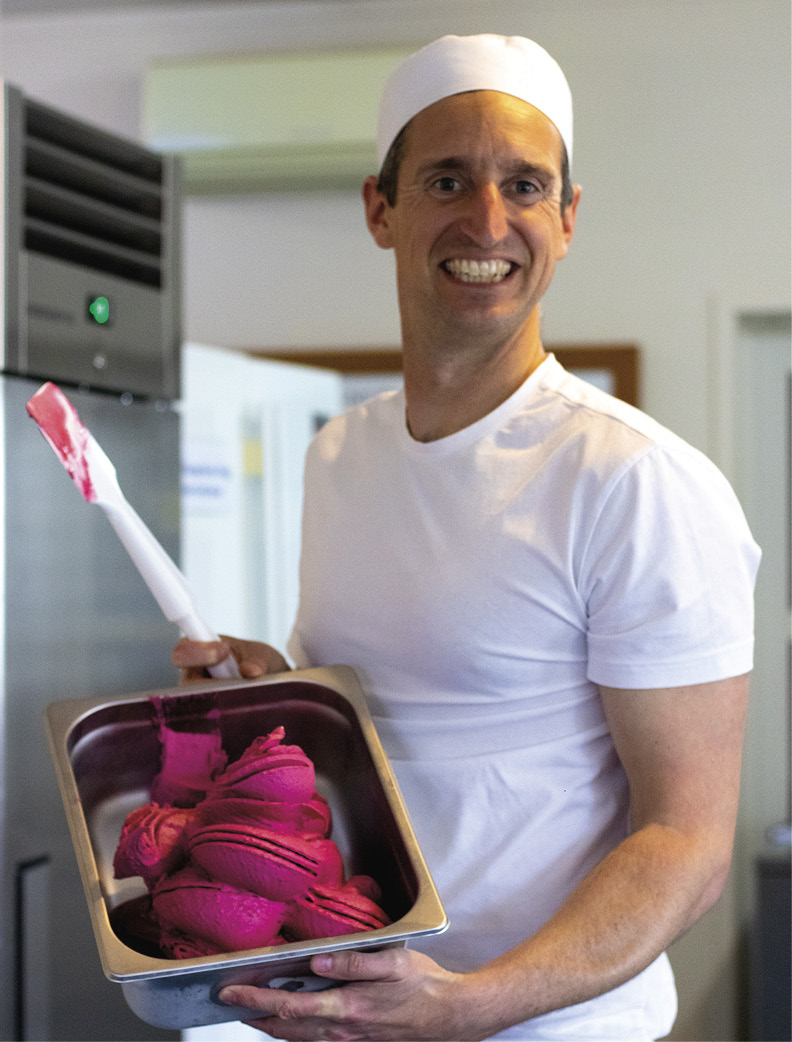 Blending traditional gelato-making with products from around Whaingaroa, the couple use Raglan-based Dreamview milk and locally-sourced fruit, and they hope to keep the most of the flavours as close to home as possible.

“We’re going to work with the season as much as possible. It’s citrus season at the moment so we are juicing as much as we can and freezing so we can make citrus sorbets or gelatos throughout the year,” Hanna says.

Lars is the brains behind the recipes and it takes a lot of mathematical ability to get the right combination of ingredients. His love for the gelato-making process is so intense, he even attended online classes at the Carpigiani Gelato university in Bologna, Italy.

“They have the maestros of teaching gelato-making in the old way. Without additives and without shortcuts,” he says.

Such is his dedication to the creating authentic gelato, Lars did the course on Italian time and for three weeks he went online from 7pm to 3am.

His gelato instructor Gianluca Degani is famous in Italy for his high-quality gelato and writes articles for a bimonthly publication on artisan gelato.

“He taught me a lot and even now if I have a question, I just send him an email and he gets back to me the next day,” Lars says.

Despite starting their business in Level 3, the couple were determined to get their product on the market and sold their first gelato tubs via contactless sales at the end of October.

They are also waiting for a gelato cart to be delivered from Italy, which will keep their frozen treats at the ideal temperature for selling scooped ice cream at the markets.

Lars dreams of a fleet of gelato carts around the Waikato with staff taking care of the selling side of the business so he can concentrate on the gelato making. They also see the potential for the carts to be hired for occasions such as weddings, birthdays or corporate events.

Since hitting the Raglan market, they have been approached by other local businesses to collaborate; a Raglan Coconut Yoghurt gelato is in the pipeline and a espresso gelato using locally roasted Morning Glory coffee beans.

The local supermarkets have also contacted the couple to stock their product, but Lars says he doesn’t have the capacity yet to keep up with the supermarket demand.

“Unfortunately, it’s too soon. I need a bigger machine. For now, small steps – they’re quite big steps for us already, but I would love to be in supermarkets one day.”

While Hanna’s background is in the food and hospitality sector, Lars has come to the food industry with a passion for flavourful food.

“I did cabinetmaking for so many years that it was time for a change. And I like food better than I like furniture,” Lars laughs.

“Lars is a really good chef, he really knows how to put flavours together,” Hanna adds.

Originally from Germany, Lars had first travelled to New Zealand in 2008 as a backpacker and fell in love with the country. He was particularly enamoured with Kaikoura, Raglan and the Corromandel.

Returning to New Zealand in 2016 with French-born Hanna, they landed in Christchurch and made their way to Kaikoura first.

“We were there for two days; the surf was flat and the weather was no good so we decided to carry on.”

The day after they left the Kaikoura earthquake hit and the option to settle in Kaikoura was taken off the list.

After visiting the Coromandel and Raglan, they decided Raglan was a better fit for the lifestyle they were seeking.

The couple are kept super busy with their new baby Adam, but say he is very relaxed and fits in with their gelato-making venture. As well as gelato flavours of pecan, chocolate, pistachio, vanilla and more, they are also making sorbets including mango, grapefruit-ginger and raspberry-beetroot sorbet.

All the flavour profiles are natural and come from the fruit, vanilla beans, chocolate, nuts and other ingredients.

“If you look on the back of the supermarket ice cream there are so many ingredients there which we don’t touch. It also has a lot of air incorporation which means it is ready to scoop,” he says.

Like a good wine, Lars explains, gelato needs time out of the freezer before it’s ready to scoop.

“It’s a good sign if you can’t get your spoon into it when it has come straight from the freezer. You need to let it sit for about five minutes before you enjoy the first scoop” he says.

For contactless sales visit the Raglan Old School Arts Centre every Saturday from 12-5pm. To find out more check them out on Facebook and Instagram @raglangelato