At a recent Waikato Chamber of Commerce event I attended, where Greg Foran was the guest speaker (one of the most impressive I have seen for some time), I caught up with Antanas Procuta from PAUA Architects. We talked about how to achieve better outcomes, particularly in regards to larger sites or where neighbouring property owners worked together cohesively, instead of in isolation, which is traditionally how developments have taken place.

True success comes from being on a cohesive team. Increased team cohesion in areas such as the workplace has resulted in increased success, work satisfaction and increased self-esteem.  Team cohesion happens when a team remains united while working to achieve a common goal. The same can be said when it comes to communities and even building developments.

You might ask how does it apply to building developments?

The Riverbank Lane and Victoria On The River (VOTR) was one of the first in the CBD. Stark Property purchased a partially vacant 4 level office building at 286 Victoria Street and then decided it would be prudent to purchase the adjoining Riverbank Mall, which had been largely vacant for many years.  The combination of these two buildings and then subsequent work with Hamilton City Council to open directly on to VOTR through a cohesive development, now houses Hamilton icons such as Mr Pickles, Duck Island, Banh Mi Caphe and Edwards White Architects, all opening on to an expansive amphitheatre-style park setting overlooking the Waikato River.

Another example is the one-hectare site of the Union Square development, which once completed, will consist of over 23,000sqm of office space, spread over 5 buildings. Within the complex there will be retail space, community spaces and pedestrian boulevards dedicated to both residents and the local community.

“The vision behind this new facility is to create an exceptional place, whether it be for work or pleasure, in the heart of one of New Zealand’s most progressive and growing cities”.

One of the most dramatic has been Stark Property’s Panama Square which consisted of 3 separate poorly maintained low grade buildings situated on the corner of Garden Place and Worley Place. Starting with the NAB Building and then progressively purchasing 12 Garden Place and then 10 Garden Place, this is now the central hub for Panama shared and co-working spaces, along with Cream Eatery, Hamilton Central Business Association and Stark Property’s own offices on the ground floor. Seamlessly configured to provide interaction internally between the buildings, this is an impressive outcome in this stunning location. 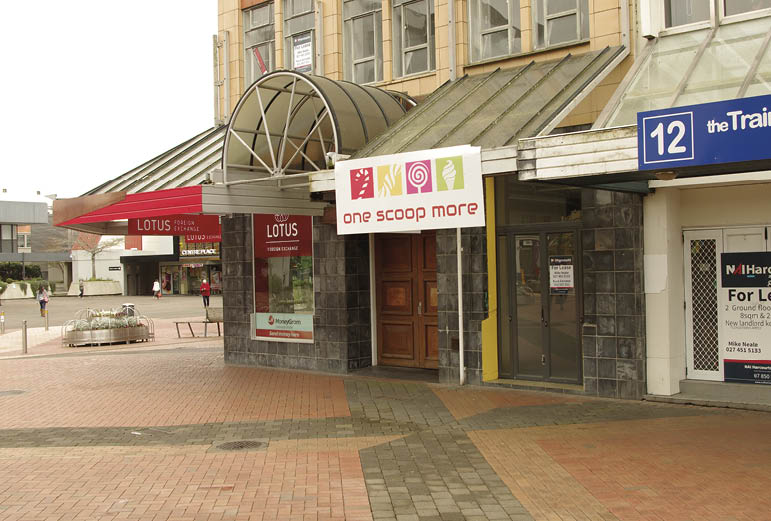 The concept behind creating cohesive spaces in the CBD according to Stark Property is that “work is not achieving tasks; it can also be a place that supports your connection to community and enhances your overall wellbeing”. Occupiers of Panama Square enjoy events and community engagements which benefit smaller businesses such as monthly networking morning teas, afterhours get togethers and charity fundraisers.

The most recent one I have become aware of relates to the former Munns Menswear site at 646 Victoria Street and the very corner site of Victoria and London Streets. The two owners have talked about the possibility of working together, by opening the southern wall of the corner building on to and activating the adjoining courtyard of the new mixed use development at 646 Victoria Street – the southern facing tenancy has experienced long term vacancy issues due to being a very deep retail tenancy with limited natural light.

For some time I have looked at the development of residential sites which are not much larger than 800sqm and wondered how much better the outcomes would have been  if the site(s) next door had been incorporated within a larger scale development, providing a more efficient footprint and greater scope for natural light and less land used for the likes of multiple driveways.

The positive consequences from the cohesiveness of these developments include a much higher level of connection and collaboration, which ultimately provides better quality outcomes and product – a better experience for the occupiers. Let’s put greater emphasis and focus on outcomes.