The Waikato man who designed the Covid tracer app is adapting the technology to help automate medical centres’ reception areas, while marking a significant milestone in the IT sector.

It is 35 years since Alan Chew founded Houston Technology Group, a notable record in a sector that has experienced successive waves of change. He is now also heavily involved in philanthropy, building on his personal experience of education as a pathway out of poverty.

Chew’s is a remarkable journey. Born to illiterate parents in Malaysia, he gained a Bachelor of Management Studies with Honours at Waikato University, worked as an accountant, went on to start Houston Technology and now, grateful for his free New Zealand education, devotes time and energy to giving back. That sense of gratitude also saw him wanting to contribute when New Zealand went into Covid lockdown, by drawing on his three decades-plus experience in the IT sector. He knew, from previous study, that contact tracing would be an important tool, and also knew the solution would need to be simple and affordable. 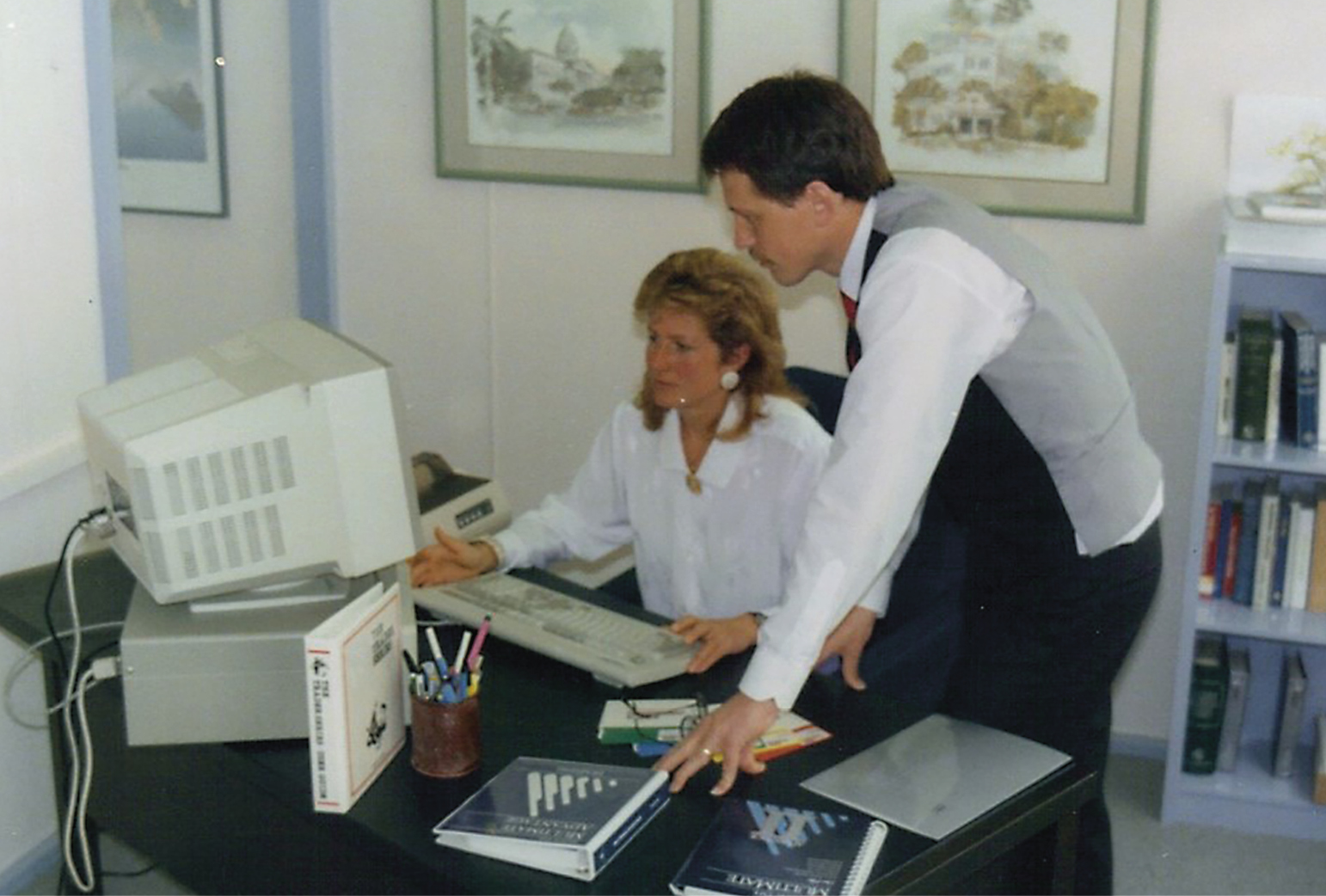 Houston Technology Group in 1986 with two of its original employees Wendy Oliver and David Fraser with an original Houston computer, which had a 360Kb floppy drive. The tablet that Alan Chew uses today has a 1Tb drive with nearly 3 million times more capacity.

“And I couldn’t think of anything cheaper than QR codes, you just need a piece of A4 paper.”

Similarly, he says, there is nothing more ubiquitous than a mobile phone. He designed an app, got colleagues to build a prototype, tested it and it worked. He sent it to the Ministry of Health and then had a six-week wait before getting his first reply. “I was very anxious in those six weeks, because I knew that it would work. But the rest is history.”

He is charitable about the delay. “They are very big and I suppose, at that time, at the beginning of the lockdown, they were just totally overwhelmed.”

Chew has gifted the copyright to the Ministry, and now is turning his attention to a similar QR-based system in reception areas at medical centres.

Here he is able to build on earlier experience; in 1992, he launched a patient management system called Houston Medical, which he says grew quickly to become number two in the country and is still in use today. Houston Technology had until then been a hardware firm, getting its start by assembling computers. Chew was concerned at how easy it was for newcomers to gain entry to the hardware market. Essentially, he reasoned, if he could do it, having never studied computing at university, then anybody could. So he went into software to diversify.

He then sold Houston Medical in the late 90s, after discovering hardware and software computer specialists are two very different types of people. “Their DNA is so different it’s unbelievable. I had to keep negotiating between them, keep mediating between them; not that they were fighting, but the ways they were thinking were very opposed.”

“Because I stuck my neck out and I learned that, I’ve now got an advantage, and I want my clients to have that advantage.”

He cites several problems medical centres face, including costly administration, queues and the need to keep contact details up to date.

The app addresses them, wth the capacity to automatically and securely update details, scan a QR code to let the doctor know you are there and pay via mobile phone on the way out. Chew envisages a waiting area with kiosks similar to those for self check-in at an airport, in a paperless process with digitised forms that eliminate the need for separate inputting. He is also working on AI cost-saving solutions for medical centres, including a system for accurate recording of ACC information.

Alan Chew does all this despite gaining a degree that had little to do with computers. He graduated from Waikato University in 1979, and served a four-year stint as an accountant with the NZ Co-op Dairy Company, followed by a spell with Fletcher Challenge. During that time he bought his first home computer and became fascinated by the possibilities.

Houston Technology (early advertisements riffed on “Houston, we have a problem”) was started with two BMS graduates and one arts graduate in a move that Chew says was either brave or foolish, given how little he knew about computing. “Looking back, I wouldn’t do it again like that. But I could not wait.”

That never-stand-still attitude, which marks out his working life, may derive in part from his childhood in Malaysia. The son of illiterate parents, he was born into a village of squatters who had moved into a coconut plantation after the owner left because the trees were ageing.

The first ever hard drive (instead of floppy drive) Alan Chew sold. It had a capacity of 10Mb. Next to the drive is a much larger capacity drive with a smaller footprint in the year circa 2000 with a capacity about 10,000 greater.

He says his own father had arrived there via a circuitous route from Canton in south China, now known as Guangdong, which was wracked by famines. In his father’s case, that saw him forced to leave the family when he was 12 in order for his own mother and brothers to survive.

Chew’s father became a shepherd for a while, heading at every opportunity to the nearby school to peer through the windows and learn what he could, before making his way to Hong Kong where he picked up carpentry and construction work, then to Singapore, then finally arriving penniless in Malaysia.

The village in Kuala Lumpur was perilous, Chew says, with the ageing trees liable to be sent crashing to the ground during a storm.

“But as a child, I don’t ever remember ever worrying about it. My parents didn’t didn’t worry about it. I look back, and I think it’s because you don’t worry about things you can’t change. That has helped me in my journey in life, too, that you focus on the things that you can make a difference to. And when you do that, you need to do it very well.”

His family became rich by village standards after his father picked up a contract to build a service station for Americans arriving to invest in the country.

The blueprints he had to work from presented a challenge given he couldn’t read a word of English; fortunately, the young Alan, then about 10 and attending an English language school, was able to assist. “Some of those words, even today I look back, they’re not easy words.”

Between his father’s construction skills and the children’s English skills, they forged a strong team, with repeat business seeing his father building many more service stations.

Being rich by village standards was a relative thing; they had the only car, a 10-year-old Morris Minor, and the only telephone. “Telephones were not allowed in squatter land. But in Malaysia, if you’ve got the money, you can buy your way into anything.”

His parents also placed a high value on education, scraping together enough money to get Alan, his brother and his sister through school and on to university, with all three going on to have successful business careers.

That background has motivated Chew to support others born in similar circumstances, and sees him active in the philanthropic sector as a trustee with Wel Energy Trust, following a stint with Trust Waikato.

Based on his own experience, he brings a strong focus on education.

“Sitting on Trust Waikato, sitting on Wel Energy and living in New Zealand, I have the question in my mind: how can people move out of poverty into something else? And the answer is as simple as education.”

It’s about building rungs into a ladder, he says. “There’s no other way of building that ladder so quickly.”

When it comes to his business, Chew, ever mindful of the headwinds for hardware companies,  set up Houston Productivity about eight years ago, after realising many of his clients were only scratching the surface of the power of the computer.

He gives the colourful analogy of an aeroplane, with Houston intent on providing the equivalent of pilot training, a compass and a map – for a fighter jet, not just a passenger plane.

“We want to fly faster further, because people use computers for business, and businesses are competing against one another all the time. I want my clients to have a competitive advantage.”

It’s about making data-driven decisions. He gives the example of a facilities management firm servicing air conditioning and heating in large organisations.

The competitive advantage lies in using sensors and the Internet of Things to give advance notice of likely unit failure, and therefore provide a fix – with a considerable saving to the customer.

“I am very, very focused on helping all businesses to be efficient because I think inefficiency is an unnecessary tax on everybody.”