The Internet of Things was front and centre among the more than 45 exhibitors hawking their wares at TechFest at the start of March, and they had no shortage of interest.

Auckland-based Adroit was focusing on its rural offerings, and commercial director Blair Stewart said by the end of the morning they had 30 or 40 inquiries to follow up on.

CultivateIT chair Thomas Coats was at the event in two capacities, with his Matamata company Luminate One also exhibiting.

For him, the day was an opportunity to share information and talk to others about what they are up to.

“For me as a business person, as well as the feedback we get, it was great to touch base with people who you already knew, but it was also about forming relationships with people in the community and people who had problems that different businesses want to solve.”

New to the market for Adroit was a range of Libelium IoT products, which included sensors for ground moisture and nitrate leaching.

Stewart and general manager Guy Macpherson said they also attend Auckland expos, and the Waikato TechFest saw them field inquiries in fish and dairy farming, among others.

“We wanted to do a bit of a tester to see if there are people interested in this and the answer is yes. We’re definitely going to follow up and hopefully do some business over the next few months.”

Waikato represents an additional opportunity as they develop their BeaSmart system for people with visual impairment.

They said Hamilton City Council is among those interested in the system, which works with the BlindSquare wayfinding app to help the visually impaired safely negotiate pedestrian crossings.

They had built the system from scratch in a joint venture and are currently trialling it in Auckland. “There’s nothing like it in the world.”

Meanwhile, at the M2MOne stall, Waikato business development manager Andre Charbonneau was enthusiastic about the region’s ability to innovate. 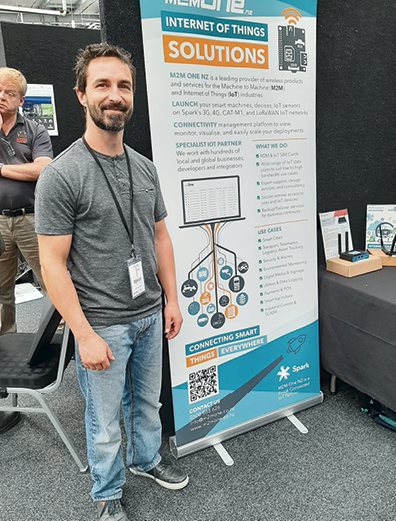 M2MOne’s Andre Charbonneau is enthusiastic about the region’s ability to innovate.

“The innovation in Waikato is ridiculous. I mean, with Fieldays, every year you see more and more innovation come to the fore,” he said.

“Waikato is many small innovative towns that are connected by 100k roads and easy to get around and lots of opportunity to improve on the data richness that we’re going to get from a  multitude of sensors.”

M2MOne is a Spark connected mobility partner that provides wireless products and services for the machine to machine and internet of things industries.

Charbonneau said it’s great that there is a lot of competition in the space. “You need that, it just stands the whole industry up.”

He sees huge benefits for the environment in open data and a collaborative approach.

“As far as I’m concerned, the health of our rivers should be a public problem,” he said. “I think we’re going to see wide adoption of this as soon as we start to realise that the only thing stopping us from being able to actually make a huge difference for the environment is just a collaboration of sensors and public data.

“Everything should be connected so long as it’s got a case for the public [good].”

The crowds at the event were notable for the large number of school students. Coats said business people there appreciated the students’ raw enthusiasm. “We want to inspire and encourage kids to get into these careers because we have a huge talent pool.”

Separating the event from the nationwide TechWeek this year also gave them the opportunity to draw speakers from around the country including Callaghan Innovation’s Vic Crone and Privacy Commissioner John Edwards.

Coats said CultivateIT was proud to keep it a free event, enabling business people to easily pop in to see what was on offer.

It gave Waikato businesses the opportunity to not only make sales, but also boost their profile. Coats says CultivateIT tries to encourage pride in the world class things Waikato companies are doing, and sees a lot of innovation around the region. “There’s a lot of hidden businesses that are delivering things overseas that you just don’t hear about.”