Singlemindedness and focus are keys to the massive growth of Hamilton-based software specialist Company-X, according to one of its directors David Hallett.

Since it began trading in 2013, with David and Jeremy Hughes at the helm, Company-X has seen phenomenal growth.

By the end of 2016 the team had grown to 30, mainly comprising software developers, but also including project managers, business analysts, software architects and user interface/user experience designers.

David, who is also a director of design company E9 and IT services company Need a Nerd says planning and preparation are a key to the success of Company-X which last year won Services Exporter of the Year (Under $10 million) at the Air New Zealand Cargo ExportNZ Awards. 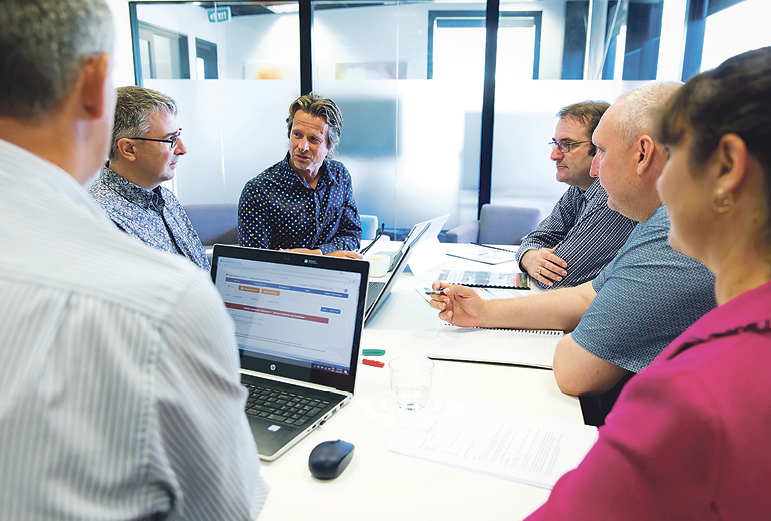 David and Jeremy cite a quote by Roman philosopher Seneca: “Luck is what happens when preparation meets opportunity”.

“We are very single-minded. We are very deliberate about what we do, how we do it and when we want to do it by. We prepare a lot,” says David.

Company-X is heavily focused on export markets and David sees big opportunities in South East Asia and Silicon Valley. The company has a number of overseas clients including Cisco Systems Inc, the San Jose, California-based worldwide leader in IT and networking. Another overseas client is Parking Sense USA, based in Texas, USA.

Parking Sense is a parking technology organisation focused on delivering a comprehensive suite of intelligent solutions to the parking, transportation and mobility industries.

Together, Parking Sense and Company-X are rolling out the technology for 87 geographical sites across Los Angeles. Other big customers include CBRE Galleria Office Towers in Dallas, Texas, the University of Washington in Seattle, Washington, and the Walter Reid National Military Medical Centre in Bethesda, Maryland.

Parking Sense USA, headed by chief executive Jake Bezzant from Cambridge, was the only exhibitor at last year’s International Parking Institute Conference and Expo to have a working solution to demonstrate the parking process from the beginning to the end.

“Our appearance at the International Parking Institute Conference and Expo proves that our collaboration with Company-X enables us to be a real innovator of parking technology,” says Jake.

“We are thrilled to be working with another New Zealand company taking on the world.” David is thrilled with Parking Sense’s feedback.

“How do you measure success? When you get told by a world leading IT services company from the USA that our team is world-class,” Jeremy says. “For us that’s a real measure of our success.”

David says Company-X’s fast rate of growth has brought its own challenges, most significant of which is staffing.

“We do a lot of analysis in terms of looking at our risk. Our biggest weakness is the IT skill shortage. There are just not enough software developers to go around. Recruiting quality staff is a continuing focus for us.”

He says another challenge of rapid growth is ensuring the culture of Company-X doesn’t change and the company works hard to ensure staff promoted to leadership positions understand that culture.

“As soon as you lose that culture which has taken us to where we are you lose your x factor. We will ensure that never happens,” David says.