With floor to ceiling views north down the Waikato River, Hamilton’s newest development at One Cook Street in Hamilton East promises some of the city’s most luxurious apartment living.

Lodge Real Estate has launched One Cook Street to the market, on behalf of developers Black and Orange. The apartments are situated on the top three levels of the eight-storey development and start at $2.365 million. They are pitched as a once in a generation opportunity to secure Hamilton’s best river views.

One Cook Street is the latest compliment to the character suburb of Hamilton East. The complex includes two levels of car parking, three levels of commercial space, and a proposed restaurant and bar with an expansive deck area looking north up the river. 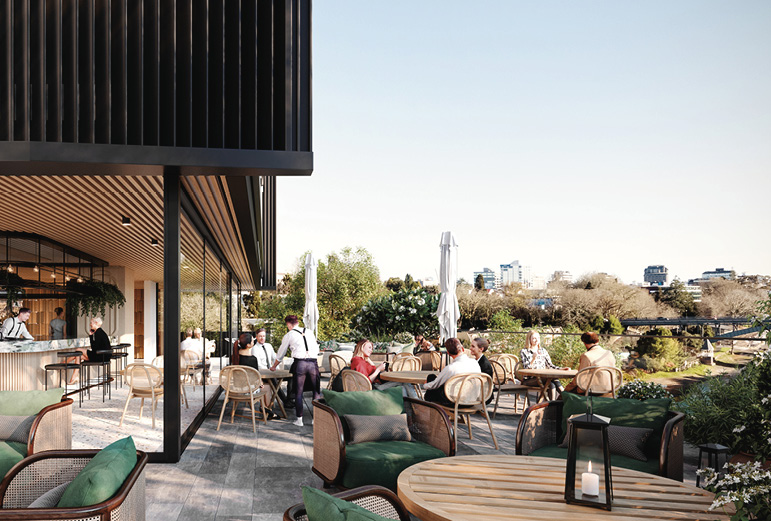 Lodge Real Estate residential salesperson Zoe Wilson says the development designed by Buchan Architects is all about luxury with majestic views, and top-quality fixtures and fittings throughout.

“One Cook Street offers a once in a generation opportunity to secure Hamilton’s best river views in an unparalleled riverfront sanctuary. Its extraordinary location provides access to the best Hamilton has to offer,” Wilson says.

Construction of the complex will start in early 2022 with completion earmarked for mid-2023 and Wilson says One Cook Street will add to what is becoming an exciting area in Hamilton city.

“We have already seen Hills Village launched in Hamilton East with success. There are great eateries in the area and that coupled with the connection to the river and the river walkways offers buyers something unmatched,” says Wilson.

She is working in partnership with Lodge Real Estate Agent James Walsh to market the apartments. Walsh says the complex is one of the few that will ever be developed on the river.

“There are not many spaces left in Hamilton to create something like this, and the views and the potential of the area are unrivalled,” Walsh says. Black and Orange development manager Daniel Kirk says the apartments feature floor to ceiling north facing windows and high-end fixtures and fittings, including wool carpets, porcelain benchtops and tiles, hardwood decking on the outdoor balconies and fully ducted heat pumps.

The apartments range in size from 144 square metres to 161 square metres and all feature over height ceilings with a level of finish well above the norm.

“This development will set a new benchmark for the Hamilton market. The apartments look directly north up the river, and we believe they will have the best river views in the city,” Kirk says.

The development is set to be the tallest building in Hamilton East and with the apartments starting six levels up residents will also have the benefit of hearing the hum of the city without being in the CBD.

“It’s an amazing site. You can stand there now and there is the birdsong from the river walkways and surrounding trees, but you also get the hum the of the city in the distance. You feel like you are part of the action without having to actually be in the thick of it,” Kirk says.

And while the unique penthouse apartments at the development’s top level are on the market, a firm price hasn’t been put on them yet.

“We haven’t put a price on them because we are interested in seeing what the market thinks they are worth,” says Daniel.

Find out more about the development at onecookstreet.nz