In one of the good news stories of the year, the Hamilton Gardens Arts Festival is set to go ahead this summer after facing uncertainty because of Covid.

Punters can snack on a New Zealand smorgasbord of performances, from cabaret to comedy, from Julia Deans singing Joni Mitchell to the Sunset Symphony.

They can also snack on locally sourced food and beverages as the festival works with Waikato Food Inc and the Food Truck League, and aims to forge further partnerships in future.

In the face of Covid, the festival has been able to rally and find the support to continue, albeit with a slightly reduced programme.

The show goes on, from February 20-28, partly because of a three-year Hamilton City Council grant, which has helped secure the festival’s future.

Julia Deans will sing Joni Mitchell in ‘Both Sides Now’ at the 2021 festival.

The grant, which at $120,000 per annum represents about 10 percent of total revenue, is the first time the city council has offered long-term assistance, says festival general manager Geoff Turkington.

He describes the support as a game changer. “It’s visionary on their behalf. Instead of lots of lurching from one year to the other, we will know we’ve got that consistent fund, and having that support from our own council puts a lot more weight on other funding applications.”

In a trifecta of achievements, the festival has also gained crucial support from Creative New Zealand and from a Domestic Events Fund set up to support the events industry during Covid.

In each case, Turkington says, the festival got the full amount it applied for and the Creative NZ funding is the most the organisation has ever given the festival.

Two sponsors that came on board last year with three-year commitments, the University of Waikato and law firm Harkness Henry, have also stuck with the festival through Covid, he says. “Those sort of partnerships are going to be the future of the festival.”

Add to that, significant support in kind from local firms such as ACLX and King St Advertising – support which, Turkington points out, has value in dollar terms to the contributing firms who could otherwise charge out for that time or equipment. “This is how amazing this community is.” 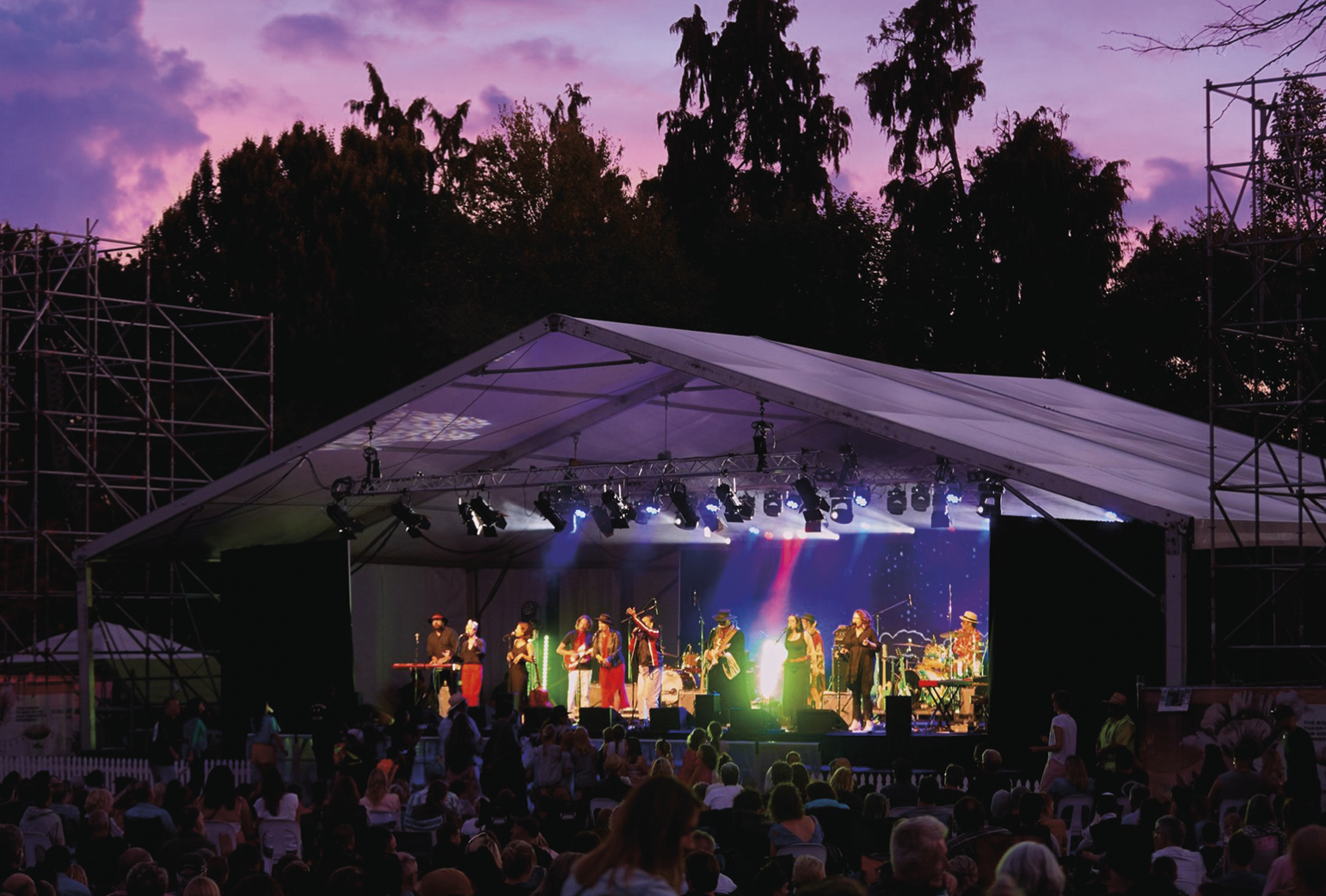 Fly My Pretties drew a big crowd to the 2020 festival.

The total cost of putting on the festival is about $1.3 million, with Turkington this year needing to find about $800-900,000 in cash. That includes ticketing revenue, which he says is a small part of the total.

“If you’d asked me probably even three months ago, I would have said no the festival wouldn’t go ahead, but if it didn’t go ahead next year we would have lost it forever,” he says.

“This year was a real challenge. Mind you it’s been a challenge for quite a few years.” Turkington, who was on the Festival Trust when he was invited to help deliver the 2019 event, says there had been an ongoing struggle to raise enough money, as the festival costs grew but funding bodies faced increasing demand. It is an issue, he says, that charitable organisations face worldwide.

Last year, the trust decided to review its purpose. “Because the reality is  that the money wasn’t there to be able to deliver the festival as people knew it to be.”

The response, far from cutting back, was to seek to expand. Turkington says an arts festival of substance is important in a growing region and city which seeks to recruit professionals. “Educated, young urban professionals who want a cosmopolitan lifestyle are attracted to places that are rich in arts. Arts drives energy and drives growth.”

The original mandate of the festival, to drive awareness of Hamilton Gardens, was no longer valid, while Turkington says two key documents, the Hamilton Plan and the Hamilton & Waikato Tourism plan, were clear on the need for at least one more major, multi-day, inbound tourism  attraction. “Well, we already had it with the festival, but no one really thought of it like that.”

At the same time, the trust recognised the value in activating the river trail between the Gardens and the central city and last year included CBD sites in the festival – which also added the Meteor as an indoor venue that was not weather dependent.

“That was quite a dramatic expansion for a festival that was struggling to be able to deliver its original purpose.”

Turkington says the organisers hope the Waikato Regional Theatre, once completed,
will become part of the festival, along with cafes and alleyways within the CBD.

That should open up other funding channels, thanks to a combined arts and tourism focus.

The festival is, he says, arguably the largest arts festival of its type in regional New Zealand and is run on a far lower staffing ratio than others. “You don’t do it for the money, you do it because you truly believe in what you are delivering for the community.”

Artists are paid, and this year more than 45,000 attended a live or free event. More than 1400 volunteer hours are required to deliver the festival each year.

“We want to create a sense of celebration, of excitement. That’s why we have the Hub, which is now from five o’clock to close – the food trucks and the bars, live entertainment every night that’s free where everybody can come down and just enjoy the festival vibe as the sun sets in Hamilton Gardens.