A leadership programme aimed at bringing together the profit and not-for-profit sectors marked its fifth year with an inaugural award at a graduation dinner in November.

The CELF Elevate programme, which has now graduated almost 100 participants in total, honoured an alumnus, K’Aute Pasifika chief executive Rachel Karalus, at the event held at the Gallagher Academy of Performing Arts. Karalus could not attend on the night to receive the inaugural CELF Alumni Leader of the Year award, but spoke via video of leaving her job as a corporate lawyer to take up her current role.

“When I stepped into the role of CEO at K’Aute, I stepped not only into my purpose, but also into my Pacific culture, and identity.” 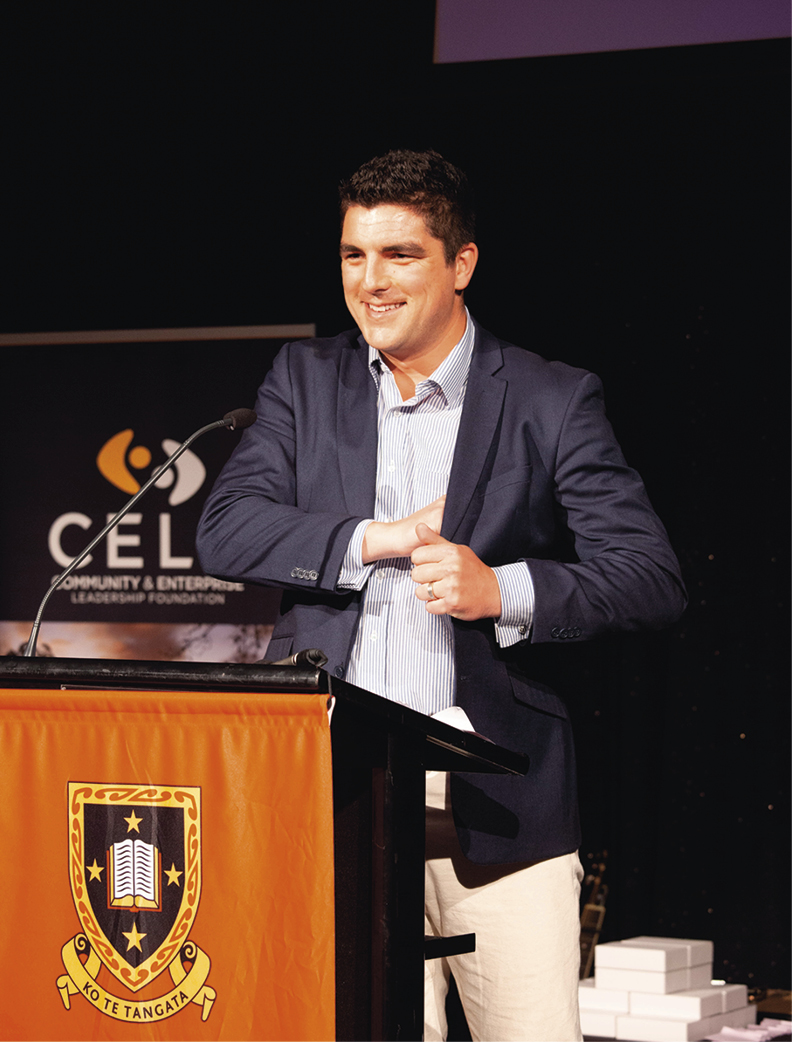 Thomas Nabb said the course has the wow factor

She said there had been self-doubt during what has been a change process at the organisation, but that this had led to personal growth and the development of her own style of leadership, while she also gave credit to those around her for their achievements over the past 12-18 months.

The Elevate programme sees Waikato businesses paying for a place on the course for a leader from their own organisation as well as a place for a community organisation member, with about 20 completing the course each year. That means profit and not-for-profit leaders benefit together from the course, which is run by Community and Enterprise Leadership Foundation (CELF) in partnership with University of Waikato Management School.

“They aspired to build future leaders from all walks of life, who could reimagine wealth creation from a social, environmental, cultural and economic perspective. They saw a Waikato with 1000 connected leaders who were driven to leave a positive legacy to succeeding generations.

“CELF has already nurtured nearly 100 connected leaders who know their purpose, who are empowered to reimagine what could be, who are well placed to work across sectors, and to build a Waikato  that is more inclusive, sustainable and prosperous.”

University of Waikato senior deputy vice-chancellor Professor Alister Jones said the evening was an opportunity to celebrate the achievements of all the graduates of the programme.

“One of the big things is that these sort of initiatives survive and create vibrancy by an alumni network, and that is absolutely crucial. A series of one-offs have no real impact. And as we continue to build on this programme, then I think this creates a fantastic community.”

The programme showed what was possible through a combination of private and philanthropic input and the university, he said. “We can make a real difference in this community, and we can support the business community also to grow.

“I think we can all agree that this programme has shown to the community that there’s more to business than just making a profit.”

One of those graduating, Thomas Nabbs of The Waterboy, thanked the organisers on behalf of the cohort, and said CELF creates connection, learning and growth.

“You’re constantly surprised on this course, it’s always had the wow factor and it’s always been mindblowing.”

He spoke of being given connection, confidence and a sense of responsibility.

“It’s taught me more about whakapapa, not only for ourselves, but so we can pass on our teachings in our, in our work in the communities to which we serve.”

CELF chief executive Tania Witheford drew analogies between leadership and a regular feature of the programme, a waka trip towards the end of the course that sees the participants paddle on the Waikato River.

For stability, the waka are bound together in pairs. “That reminds me of the very fact of how CELF operates. We bring our for profit and our for purpose sectors together, and through that binding we create a stronger foundation, a more sturdy foundation that enables us to travel together.”