The broadbill swordfish breaches, an awe-inspiring sight. It’s a 134kg animal from the deep, and Mig Rumney has it securely on the end of his line. This will be a two-hour battle and at the end of it the fish will be hauled aboard, its race run, to be taken ashore, weighed and then shared out to feed friends and family.

This will be a two-hour battle and at the end of it the fish will be hauled aboard, its race run, to be taken ashore, weighed and then shared out to feed friends and family.

During those two hours, Rumney’s cousin Scott Parry will be on hand, strapping him into a harness, supporting him all the way and talking throughout. Scott’s brother Ben is also on board the so-called Holy Ship, as is cameraman Jared Baigent, and the fight will be filmed from the boat and from a drone, as well as under water. 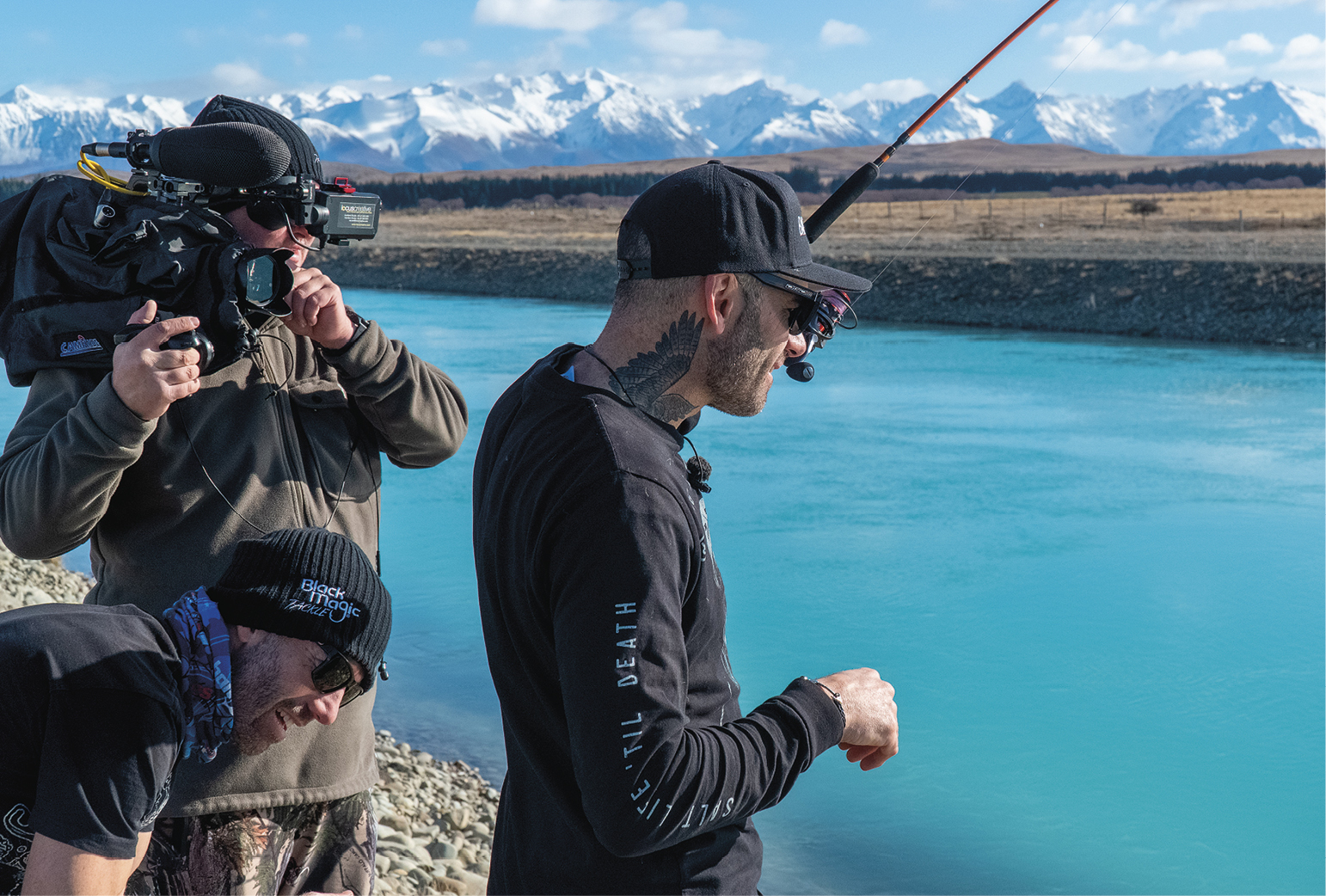 Fishing at Twizel’s canals in the South Island, in a rare freshwater expedition.

Episode one of season seven of Fishing and Adventure proves highly memorable as the team catch the fish they have set out for from Waihau Bay. Two hours will be condensed into a matter of minutes of drama-packed viewing time.

Ten years after setting out on their dream of landing a fishing TV series, Parry and co-presenter Rumney are back on New Zealand’s TV screens at the start of their eighth continuous season.

Fishing and Adventure has grown to become New Zealand’s top-rated fishing show, and the cousins are showing no sign of slackening up, with plenty of plans for the future. 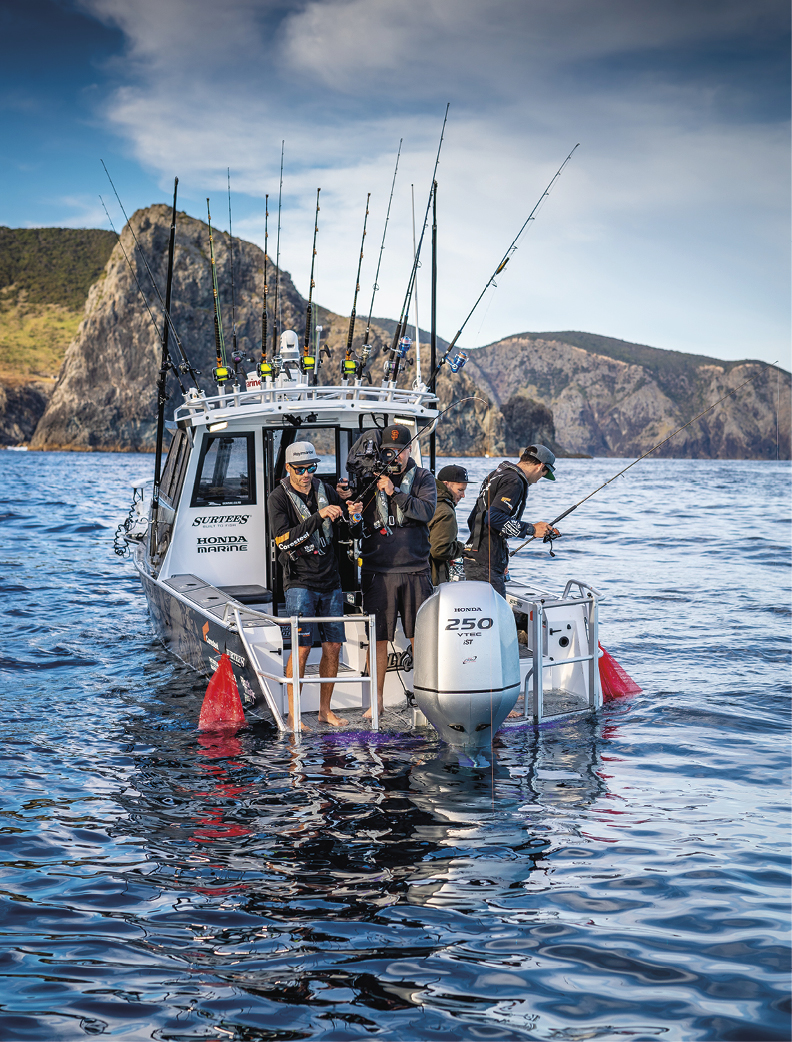 The New Zealand coastline makes for the perfect backdrop.

They have also shifted their base to Hamilton from Auckland during that time, bringing it home for Raglan-born managing director Parry, while also bringing it closer to Rotorua-based operations coordinator Rumney.

A further benefit of shifting to Hamilton is they have been able to bring everything under one roof. It’s a tight operation at their unassuming Frankton premises. In a smaller groundfloor room just off the entrance, the latest batch of merchandise has just arrived and is spread around waiting to be packed away, to be sold online via their website. “After each episode you get a good surge of stuff fly off the shelves,” Parry says. “It’s not a massive revenue earner for us, but it definitely makes it worth it. And it’s also another way of getting our brand out there in front of people in a different way.”

In the same space as the merch there is a modest editing desk, and adjoining is a small, sound-proofed room for voiceovers. In a larger space to the rear their two boats take pride of place, with a dazzling array of rods racked against a wall. Upstairs in the office, the spear of a marlin – not the season seven swordfish – adorns one of the desks.

Parry and Rumney had zilch experience of making TV when they decided to go for it with their idea for a show, one which they thought could fill a gap in the market based on a more youthful, entertaining approach. Parry was 28, Rumney was 20, and they were already working together doing Sky installs, but thought they could do something bigger.

Their points of difference, as Parry describes it, revolved around the adventure component of the show – which has dwindled as they have realised what viewers really want is the fishing – the painful consequences they pay when they don’t achieve their target, and the fact that, as with the swordfish episode, they have a
storyline each time.

“As we got into the first season of the show, we realised the fishing was very much what people were wanting. They were wanting that fishing content but they liked the idea that we were, I guess, just a couple of guys going fishing with no real agenda, not really telling people too much how to do it, doing it how we would do it, giving them some tips along the way and having fun in doing so.”

Their success is clearly built on the rapport of the two cousins, along with their Te Kauwhata-based cameraman Baigent, who has been with them from the start, and Ben, who arrives from his South Island job every summer to do the underwater filming.

Out there on the water, Parry and Rumney are miked up and front the show, but everyone mucks in when it comes to the likes of underwater camera work, driving the boat and operating the drone. It doesn’t hurt that Parry is a natural talker, with Rumney not far behind.

But behind the banter is a smart business operation, one they have honed in the years since they started knocking on doors of networks and sponsors, and since Parry sold his boat to fund the first season.

They got their start on Prime and Sky, but the big fish was TVNZ where they have been for three years, and which delivers a larger audience. That has seen their number rise from a ceiling of about 40-50,000 at the previous broadcasters to a total of just under 200,000, typically up to half of that live and the remainder on demand. They have the prized 4.30pm slot on a Sunday, and the new season has just kicked off on August 2. They fish from December till June, and the rest of the year includes the likes of sponsor engagements through appearances and social media. They also run a kids club, go to schools in support of Duffy Books and are ambassadors for Sustainable Coastlines. They have boosted the off-water side of the business in recent years with the appointment of sponsorship and marketing manager Sue Esselbrugge and more recently marketing and media production executive David Holzapfel, who focuses on the digital platforms, and Parry isn’t ruling out future growth.

Along the way, they have not only honed their show-making skills, but also worked hard on the brand and on the crucial sponsor relationships.

Parry says it’s about working with sponsors, getting the best value for their investment.

In a reflection of how well they are doing, he says their marine sponsors “can’t sign quick enough”. He acknowledges the revenue component counts. “But it’s not all about who’s got the most money. We can work with the best and who we’re most compatible with.”

It’s not straightforward; although the network doesn’t pay them for the show, it nevertheless keeps a watchful eye on the sponsorship branding.

While the formula is clearly working, and they are in no hurry to change, they are also looking to the future. That has the potential for a different show, one potentially funded by the network or NZ on Air and with an even more accessible, grassroots format. An episode could involve borrowing a boat, for instance, and taking on the challenge of catching a target species with a minimal budget.

“There’s scope there for that. But what we’ve got going on right now is really, really good. And we don’t want to compromise that by doing something else. So while this is still working, we will, I guess, tinker away at that in the background.”

They also have plans in place for the increasing shift to online viewing, Parry says. He says they have a good YouTube following for their earlier episode, without any promotion of them. “So we know that there’s a platform there we can build on.”

Last year, Fishing and Adventure were finalists in the micro business category at the Westpac Waikato Business Awards, and won the people’s choice award – perhaps not surprising given the popularity of the show.

They made some good contacts, Rumney says, and Esselbrugge says the local connections are important to them.

Ebbett Hamilton is a sponsor and they also work with Thomsons ITM, she says. “It’s good to connect with the businesses around you.”

Back on the water, episode one of season seven is a case of third time lucky for the cousins after they lost swordfish in two earlier seasons. Cameraman Baigent films the high-fives all round as Rumney lands his first billfish. The adrenalin is still pumping as they haul it aboard.

Once they’ve returned to land, they reflect on the afternoon’s fishing.

“Absolutely, and that’s the first swordfish for Holy Ship, so we’re absolutely stoked with that.”

Parry: “The monkey’s off the back, and an epic, epic trip out in the Bay of Plenty.”