A breaking-ground ceremony at Union Square has helped kick the Hamilton construction sector back into action post Covid-19.

High-profile tenants Rabobank and AA Insurance are signed up and earthworks are underway on the prime commercial site in central Hamilton.

Led by Foster on behalf of AFI Investments Ltd, the staged development is likely to contribute hundreds of millions of dollars into the local economy over the next five years.

The first building, Ebbett Tower, is on the corner of Anglesea and Hood Sts, and the developers hope to start on further buildings in the complex, designed by Chow:Hill Architects, early next year.

“Ebbetts will move out to Te Rapa around February, and then we will clear the site, and our aspiration is to start on the next building at the rear along with the 350 space carpark early next year, depending on leasing,” Foster Develop director Rhys Harvey says. 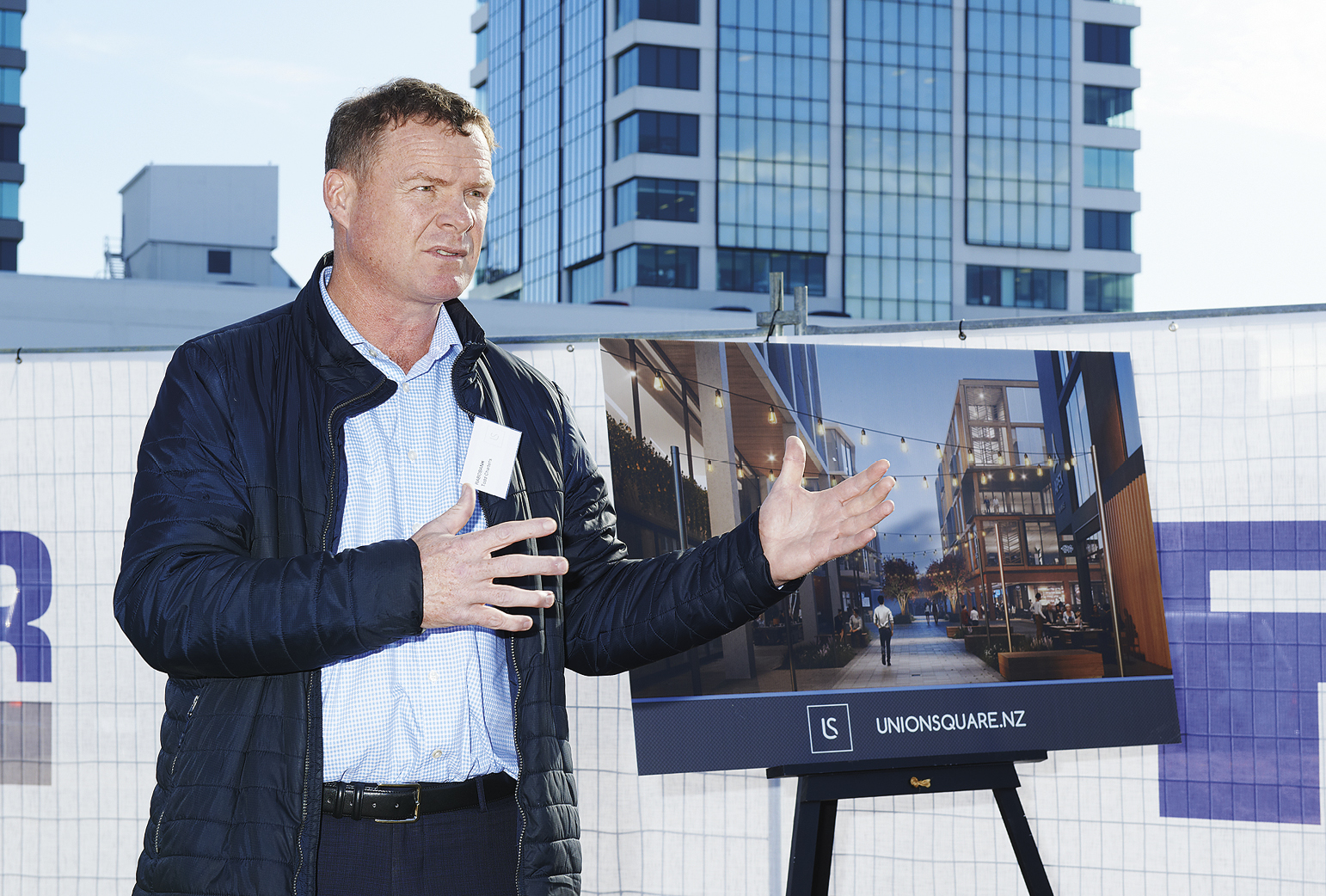 “The target market is major occupiers in Hamilton but also, as importantly, who we can bring in from out of Hamilton. They would be the corporates in Auckland who have clients here, and also Wellington including government agencies.

“With Union Square, we’ve focused on design and the occupier experience that will position Hamilton as a destination where you can grow your business. These ensure our tenants can attract and retain the best talent.”

The development will include a purpose-built wellness centre and end of trip facilities such as bike parks and showers. It will feature adaptable working spaces, meeting rooms and breakout areas for collaboration, and the retail spaces will provide amenity for both tenants and the wider community.

Harvey says early interest is strong as Union Square marketing gets underway in earnest, after Rabobank and AA Insurance signed up earlier.

Rabobank and AA Insurance will occupy all five floors of Ebbett Tower, bringing about 300 staff to the site when it opens. Rabobank, which is moving from Wellington, will take the top two floors, with an option on level three, while AA Insurance will take the bottom two levels, including the ground floor. Also on the ground floor will be the main lobby, a cafe and access to Union Square’s central plaza.

Rabobank will have signage rights, and the initial term for each lease is nine years.

“Moving to Union Square in Hamilton amidst one of the largest and growing food and agribusiness regions sets us up for a future of growth alongside our clients,” he says. “We’re planning to make our new home a real agri ‘centre of excellence’ – a great place to work for our Rabobank team and a welcoming space for our farming clients too.”

AA Insurance project sponsor for Union Square, Justine Burn, says their 112 Hamilton staff are looking forward to moving in next year. “We’re certain Union Square will give the south end of the city a major boost, and we’re delighted to be part of it.”

When choosing a new lease for their training centre and customer service call centre, she says they were impressed that Union Square includes green-building principles, which is reflective of AA Insurance’s Auckland head office. “We understand how important a well-designed work space can be for our people’s health and well-being.”

Ebbett Tower, with a floor plate of 900sq m and total space of 4,600sq m, is due for completion in August 2021. It features large efficient floor plates, modern façade and curtain walling to provide maximum natural light, and is built to green-star building principles, Harvey says.

Until then, both tenants will be accommodated in another Foster build. Construction is well underway at 183 Collingwood Street and will be finished in September.

The building will feature a total 1200 sq m of office space with about 25 onsite carparks.

Further north in the central city, Harvey says another Foster development, 586 Victoria Street, has been leasing up well since the build finished in August 2019. After starting at 20 percent occupied, they are now 72 percent occupied and have just signed another two leases that will bring them to 85 percent.

Ebbett Tower, meanwhile, is set on one of the “most prolific” sites in Hamilton’s CBD, Harvey says.

As for Union Square: “With 30,000sqm of office space and 18 retail outlets supported by a 350 space onsite carpark, the square will be a hive of activity during the day and into the evening.”