A women’s wellness retreat that may be the largest of its kind in Australasia has opened on a high-profile property beside Lake Karapiro.

It is the culmination of a 20-year-old dream for the property, which was originally developed as the ill-fated Phoenician Spa around 2000, and has lain largely unused ever since.

Current owner Lakeside New Zealand Ltd have been able to achieve what no previous owner could in getting a commercial operator on board. 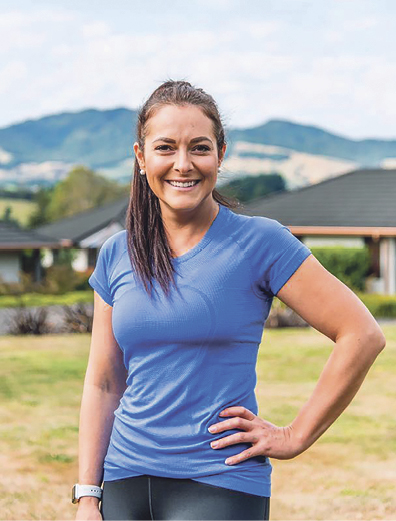 Joelene Ranby at the retreat.

Ranby was drawn by both the facilities and the space, giving her the opportunity to grow her business.

She has fitted out 20 of the 45 chalets on site, with the ability to upscale if needed. Most guests are aged 40-60 years, she says, and they can come for stays ranging from three days to three weeks. Demand for the retreat comes mostly from around New Zealand, with about 10 percent of her business coming from overseas, mainly Australia.

“We specialise in women’s weight loss but also help women with a huge array of different health challenges,” Ranby says.

The chalets are each around 60 square metres, and a range of activities are offered in the central complex, which includes a covered swimming pool, spa rooms, a room used for yoga with views across to Maungatautari, along with a commercial kitchen and dining and lounge areas.

Ranby says it is the largest complex specifically for women’s wellness in Australasia. On offer are yoga, meditation, group fitness sessions, and cooking and education workshops, all with a practical approach aimed at giving guests useful tips to take home.

“We eat five meals a day – practical, healthy food,” Ranby says.”We prefer people to be able to try a menu here that they could realistically implement at home.” That includes meat and dairy where guests are open to it.

Ranby says most of their clients come specifically for the retreat, but part of the opportunity with Waikato, and the resort’s proximity to huge attractions such as Hobbiton and Rotorua, is for the retreat to be part of a longer trip.

“So free independent travellers, being women from Australia who are wanting to come to New Zealand, seeing a little bit of New Zealand and doing a retreat as well while they are here, I think is a pretty special opportunity,” Ranby says.

She also enthuses about the nearby walks, including the banks of Lake Karapiro, Maungatautari and the Blue Spring Te Waihou walkway, along with Cambridge as an attraction in its own right.

Hamilton & Waikato Tourism chief executive Jason Dawson has welcomed the arrival of the retreat to the region.

“The establishment of Resolution Retreat in the Waikato is aligned to our 2016 Tourism Opportunities Plan, where we identified the opportunity to establish well-being experiences in the region,” he says.

Ranby expresses frustration, however, at a perceived lack of support from both NZTE and Tourism New Zealand, despite wellness tourism being identified in a summit last year as a lucrative option for the industry.

“I’m not aware of any wellness tourism push from Tourism New Zealand or support of any description,” Ranby says.

She started running retreats in Tauranga in 2012 as a sideline while working as a chartered accountant. She had gone through what she describes as a “health transformation” in her 20s and discovered there was a scarcity of women-only wellness retreats.

The sideline grew to become a full-time business and now has 21 staff and contractors, including nurses, workshop facilitators and consultants, beauty and massage therapists and personal trainers.

“I’m glad that it started out as a hobby because it genuinely is something I’m really passionate about.”

Her accountancy background also plays its part, contributing to her pragmatic approach, she says.

“I really understand that these women don’t have 20 hours a week to spend in the kitchen. They need a pragmatic and a solutions focused approach to health. And in their massive list of things on the to do list today, if I’m going to add another 10 things to that list, I’m actually probably not helping.”

Instead, women are encouraged to prioritise, and start with one thing to change and one thing to add, she says.

There is potential for growth at the complex, and Ranby has been approached by organisations interested in running conferences on site. She says there is the possibility for that to happen between retreat offerings but also sees an opportunity in running more retreats back to back, retaining the intimate feel.

The complex itself has a colourful history that takes in successive ownerships. It was kickstarted by Henry Holt as the Phoenician Spa, which collapsed in 2001. Balmoral Marketing picked it up before going into receivership in 2005 and it was then acquired by subsidiaries of the Tony Tay Group who almost completed the property as the Karapiro Wellness Centre before going into receivership. It has finally opened for guests under current owner Lakeside New Zealand Ltd.

The companies register lists Luigi and Antonio Muollo as the owners of Lakeside. The Muollos have extensive property and horse racing interests.

“We had something like about 15 or 18 different purchases to make to acquire them,” Cobb says.

“We bought this thing off liquidators and mortgagees at a price that allowed for our expectations of what may need to be done and the time we were going to do it. And we weren’t far off the mark at the end of the day.”

They also bought two neighbouring properties, one with a five-bedroom house used by the caretaker and the other currently being grazed, collectively giving them 35 hectares.

The property was briefly back on the market two years ago. Nick Thompson, who marketed the property, says there was a lot of interest and offers but the price wasn’t right and ultimately the owners decided not to sell.

Cobb says Tay had done a “damn nice” job of the construction. “We came along and saw great bones.”

Lakeside has done some landscaping and building repair and maintenance. “We’re very proud of what we’ve done there,” says Cobb. “It’s 100 percent compliant, it looks great.”