An ambitious set of 10 Waikato wellbeing targets has been unveiled at a packed summit attended by Prime Minister Jacinda Ardern.

The targets identified at the February summit range from reducing poverty, hunger and energy hardship to increasing the number of swimmable rivers and lakes in the region. 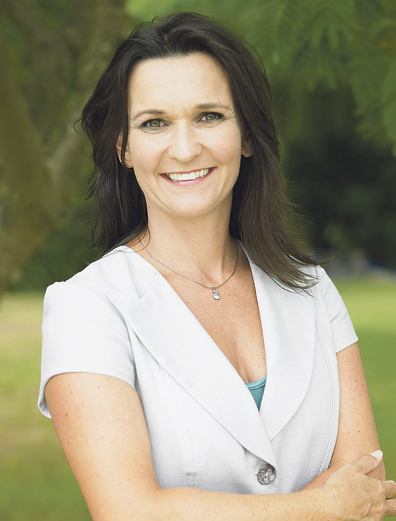 Raewyn Jones says the project is about systems change.

Waikato is the first New Zealand region to develop such targets, which are aligned with the UN sustainable development goals framework, and there is a tight 10 year timeframe for their achievement.

One of those driving the targets says the time is right for a movement for change.

“People are beginning to understand that to get a different outcome we have to do things differently,” says WEL Energy Trust chief executive Raewyn Jones, who is co-chair of the Waikato Wellbeing Project.

“It’s also about top-down meeting bottom-up in terms of wellbeing. It’s great to have wellbeing budgets, but unless change happens at a community level, you won’t get real change.”

“I applaud the work that you’ve been doing with the Waikato wellbeing project and the considered, collaborative approach that you’ve taken,” she said, adding that all eyes would be on the region as it developed the targets.

The manu taki, or navigators, of each target were also introduced at the day-long summit, which was attended by about 350, including community and business leaders and a contingent of Matamata College students. 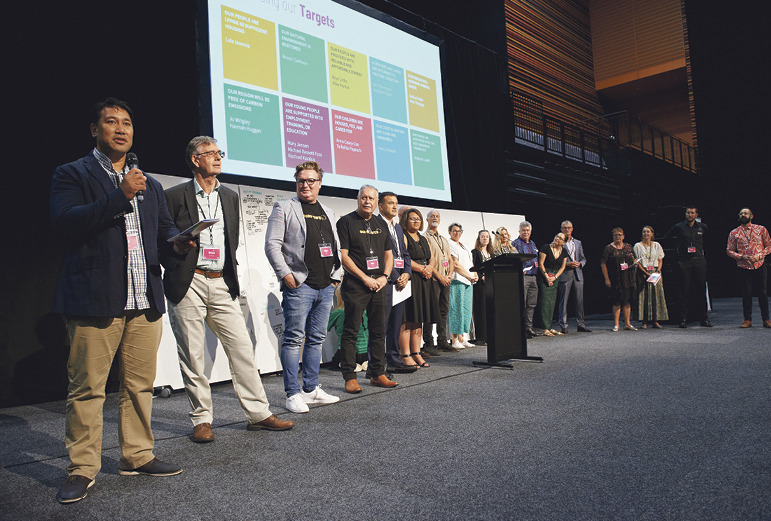 The manu taki (navigators) are introduced.

The targets come with specific, measurable figures. The swimmability target, for instance, is more than 80 percent, up from 30 percent in rivers and 73 percent in lakes. Elsewhere, the aim is to have less than one percent of children living below the poverty line, down from the current one in six. (For the full set of targets, see https://www.waikatowellbeingproject.co.nz/)

Developing them took about a year, building on existing Waikato research with both expert and public involvement.

“We went out to schools, we spoke in boardrooms, we went to anyone who would have us,” Jones says.

The Matamata students attended the summit after they had contributed as part of a unit on sustainable development growth.

Jones says it is no accident that Waikato is leading the charge. “I think Waikato is pretty good at working together.”

The region has the further advantage of manageable scale. “We’re big, we’re broad and we’re diverse, but for a pilot for something like this [we’re] pretty well perfect. We can give it a shot.”

Summit attendees were told the stories of projects already pushing the region in the right direction.

One was Whaingaroa Harbour Care, which was founded by Fred Lichtwark 25 years ago with the aim of restoring the waters of Raglan harbour. 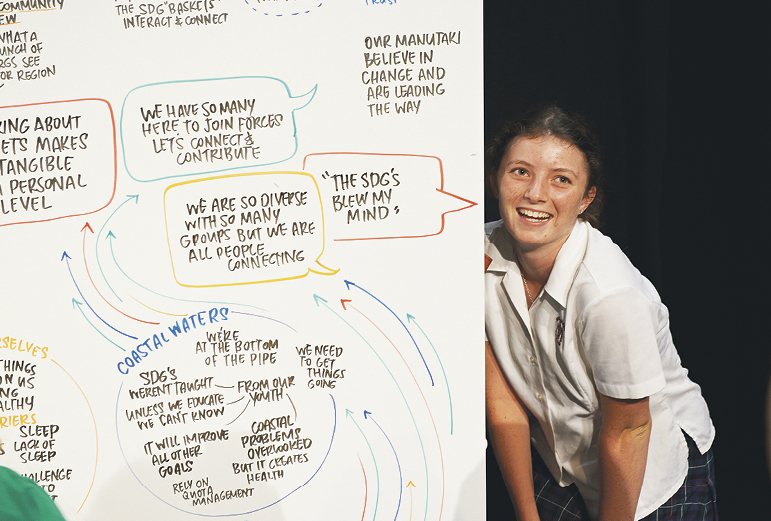 A Matamata College student with the visual record of the day.

“The catalyst for him was the quality of the water and the fact he couldn’t catch fish,” Jones says. “They started all that riparian planting which stopped the run-off into the water, but also provided employment for young people and training.”

The harbour is now a “jewel in the crown” for tourism in Waikato. “That’s about the quality of that environment that they’ve managed to establish there – so there have  been social,  environmental and economic benefits from that one target that he set out to achieve which was to improve the water quality.”

Another pioneering project is the Waikato regional housing initiative. Jones says over the past two years numerous organisations – from night shelters to commercial developers – have come together to address housing in the region. They did a stocktake, with funding support from WEL Energy Trust, and realised the region was short about 7500 homes. That has seen funders and investors work together to help solve the problem.

Central government has been supportive, Jones says. She points out New Zealand has signed up to the sustainable development goals and is obliged to report on progress, so future tracking and reporting on Waikato results will have ramifications at a wider level.

“Change is afoot and its global, it’s not just Waikato.”

As for those next steps, they will be led by manu taki with support from organisations that are certain to include WEL Energy Trust, as well as Waikato Regional Council which has also played a key role in establishing the targets.

Jones memorably says they “stumbled” across the line at the summit after a 12 month building process.

“But then I realised it wasn’t a finish line. It’s a start line.”

The example of Nepal

If Nepal can do it, why can’t we? That was the question in Raewyn Jones’ head as she returned from a holiday in 2017.

“And I thought, well that’s amazing. If Nepal can do this, why can’t we?”

The goals were admirably specific, she says, including reducing the rate of childhood stuntedness by a measurable amount.  “I thought, well, we don’t struggle with childhood stuntedness, that’s a very meaningful goal for them. And not only that – they’re attracting commercial capital. This airline is putting money into it.”

On her return to New Zealand, she took a call from a colleague, Karen Bennett of Waikato Regional Council, an organisation which Jones says is very advanced with reporting against sustainability measures.

“Karen is a very passionate person about making a difference and she just said to me, wouldn’t it be great if we had smart goals for Waikato around sustainable development?”

Others had also been talking about the goals.

“It was the right time in the conversation. I said ‘Karen, let’s do this’.”