The public sector is making the running as Hamilton’s CBD fills with office workers. Waikato District Health Board’s move into the former Farmers building is almost complete, bringing more than 550 workers under one roof by April.

They will be joined in the city centre when more than 500 regional council staff shift from Hamilton East to the new Tristram Precinct by the end of the year.

The trifecta comes with the announcement of a major build by Tainui Group Holdings which will see ACC move 650 staff under one roof, with 400 of them coming from Te Rapa.

It may mark a turning of the tide, after Inland Revenue shifted 500 staff from the city centre to Te Rapa less than two years ago.

Council general manager city growth Jen Baird says it is “fantastic” the government sector is supporting the vitality of the CBD by bringing significant offices into the city centre.

“This is exactly the kind of growth that we want in the city centre. Bringing people in there helps create all of those benefits in terms of vibrancy and encourages other auxiliary businesses to locate there as well. We will no doubt see cafes and other kinds of businesses pop up to support those extra people in town.”

She says the council has a focus on also enabling residential growth in the city centre. “One of the one of the things that adds real vitality to a central city is people living in it because then you not only have the daytime economy but you have a really vibrant outside of work hours economy as well.”

The TGH build, on Waikato Tainui land on the corner of Collingwood and Tristram Streets, will consolidate three ACC Hamilton locations into one. It will be four storeys high, configured in three connected pavilions, adding around 8500 square metres of office space, and may include ground floor retail and food and beverage services.

Work on the $50 million-plus building will start in the final quarter of this year, with completion due in late 2022. The corporation will lease for an initial 15 years, with several rights of renewal.

TGH chief executive Chris Joblin said the development comes on the back of a memorandum of understanding Waikato Tainui signed with the corporation nearly six years ago.

“We’ve been working in partnership over the last 12 months or so, to create what we think is a really compelling outcome and development and something that will be a real boost to the CBD,” he said.

The building “effectively” has a four and a half green star rating, he said, and it will be about 130 percent of the earthquake NBS rating.

It is TGH’s first big development in the city centre, where Waikato Tainui is the biggest landowner, Joblin said.

“We want to see the CBD develop. And this is just one way that we can do that.” 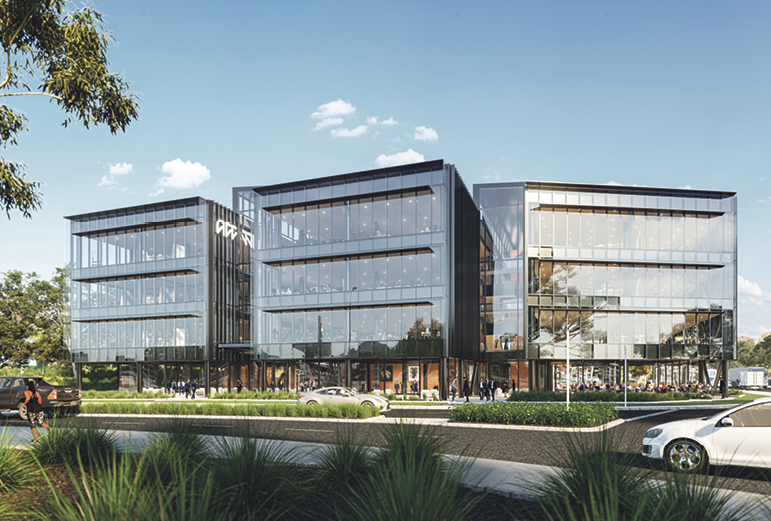 It also fits with a key strand of the group’s investment strategy to enter long-term lease agreements with Crown agencies.

ACC chief executive Scott Pickering said the new building would house about 18 percent of its total workforce. “It’s critical not only here for the region but also as part of our national hub network.”

The corporation currently occupies two CBD sites and one at Parkinson Place in Te Rapa which was built to house its staff in 2004.

The partnership with Waikato Tainui also provided the opportunity to work together to look at injury prevention programmes and employment pathways, Pickering said.

“ACC, as an entity, is also a significant investor in its own right. And who’s to say that there aren’t opportunities for us to look to work together in other forms of development?”

The architects are Auckland-based Warren and Mahoney, who TGH is also using for the Te Arikinui hotel at Auckland Airport. The next step is to go to tender for a construction partner before starting the Hamilton build in October.

TGH has also announced a 50:50 joint venture with Port of Tauranga to bring the Ruakura Inland Port at Hamilton to fruition within two years.

The new joint venture will take an initial 50-year ground lease to establish the inland port, and plans to start port operations at Ruakura following the opening of the nearby Hamilton section of the Waikato Expressway, currently scheduled for the end of 2021.

“This agreement brings clarity and certainty to the development of Ruakura Inland Port and signals we are open for business.  As the largest port in New Zealand, Port of Tauranga will bring world class expertise in developing and running ports,” Joblin said.

Meanwhile, the announcements are likely to keep coming from TGH as it seeks to do things at scale in the city centre.

“What we want to see is a growing of mixed use in the city centre – office, residential, retail,” Joblin says.

“Bringing more people into the city centre is going to create vibrancy and scale and it enables you to think about a whole lot of different things. So, for example, growing the office component in the CBD, you can start looking at things like metro urban rail.”

That could include a pendolino-style, fast train Hamilton to Auckland.

“You’ll be Hamilton to Britomart in 55 minutes. So, from a regional point of view, that is a massive game changer,” he says. “We as a city and a region have really got to push for fast rail.”

More immediately, the 40 room Novotel extension is due to open on April 9.

TGH continues to assess the economic viability of a third Hamilton hotel. “It’s not there at the moment. But we would dearly love to build one at some point.” The timeframe is likely to be closer to 10 years than three, he says.

The vacant Waikato Tainui block on the corner of Victoria and Ward Streets is set to be developed as office space “in the next year or two”.