With an international award and some new brews in the chiller for summer, Good George co-founder Darrel Hadley is feeling positive about the prospects for the Frankton-based company.

The brewery claimed an esteemed award in 2018 at the Octfest Beer Fest in New York with its specially brewed Kiwi sour beer, containing New Zealand kiwifruit in a German style sour beer.

“Given that it was a publicly awarded beer, judged by 6000 people who know their beer, and it was out of 90 breweries present, it was quite an achievement for us,” says Hadley.

While Good George is working on some export possibilities, the logistical challenges of exporting and delivering a quality unpasteurised beer unspoilt to overseas markets can be a tough one, and Hadley still sees plenty of potential here at home.

In early December, Good George launched a quirky sour beer “Smashed Blueberry” in time for summer, and a market more receptive than ever to new beer styles and flavours.

“The sour beer phenomenon is something that in the United States followed on from the IPA craze. It has not caught on yet in New Zealand, but we are looking to be the ones who help pioneer it, and the blueberry beer is at the front of that.”

Combining the company’s brewing skills with locally grown blueberries from Matangi grower Dan Peach has provided a valuable provenance link to the new beer, something Hadley says more and more consumers are seeking in their food and beverage experiences.

“We have done other collaborations with the likes of Zealong Tea and local coffee makers. People are looking for nice stories with their experiences.” 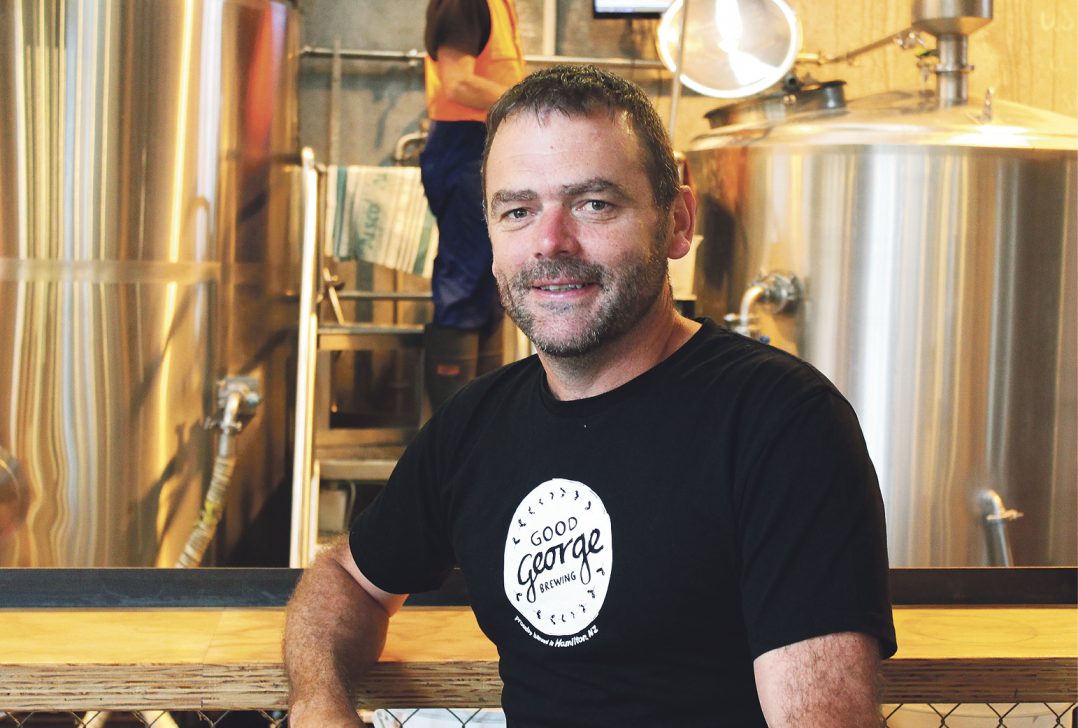 He acknowledges as it has matured the craft market is a tough business, with growth nearer 10 percent a year than the earlier 30 percent, in a small country that now claims almost 200 breweries.

“It is not easy competing with the big breweries for taps in establishments. It was easier in the early days to pick up a tap here and there. But understandably local outlets want to support their local brewers. Having our own outlets means we are fortunate to have a blank canvas for promoting our beers, and introducing customers to new ones.”

The company now has 11 food and beverage outlets, including two in Auckland. Its North Wharf outlet near Auckland’s trendy Wynyard Quarter is trading well only a few weeks into its opening.

Hadley says management are constantly on the lookout for other flagship locations, which play a big part in building customer loyalty and helping them make a purchase choice when faced with the “wall of beer” in the local supermarket.

“Having enjoyed our product in one of our outlets, that gives them a point of reference when buying in the retail environment.”

With the company’s founders all having a strong hospitality background, including Hadley’s 13 years with Phoenix Hospitality, there is an equally strong focus on food as the liquid product in all Good George venues.

“People’s habits have changed and food is a big part of any hospitality experience and all our menus have at least a 50 percent food component to them.”

In the coming year the company is also launching into the spirits market, leveraging off its brewing and distillery skills to produce a Good George Gin.

Hadley is clearly excited about the extension beyond beer, seeing gin as a spirit enjoying something of a renaissance.

“We are seeing a shift in health-conscious consumers who see spirits like gin as a refreshing drink, low in sugars and carbs. It is a massive trend in the United States at present.”

He sees gin falling into that sweet spot and describes Good George’s as a “forward, citrusy” blend or aromatics enjoying a positive reception from customers sampling the first version of it at the company’s outlets.

Additional beer types and the gin all bring added pressure to the brewery’s Frankton premises and capacity. But Hadley says the company enjoys its position in the heart of Waikato, and believes customers appreciate having their own local brewery punching above its weight in Hamilton.

“It think it reflects how much Hamilton has grown up in recent years.

“Meantime for us the challenge is to keep new products coming out, like the Blueberry beer and the gin and our ciders, generating interest and giving people a reason to buy our product.

“The days of sitting back and just brewing an IPA just don’t cut it anymore.”