Gallagher Group is eyeing huge growth in its global security business as it reaps the benefits of a strategic plan put in place four years ago.

Contracts range across government and enterprise sectors, and include the National Grid in Britain, and Fitbit.

Almost all revenue is export-driven, with deputy CEO Kahl Betham saying America is highly promising, along with Australia and Britain.

The company is also trialling a cloud-based security system for small enterprises and has embarked on a major future of work project. 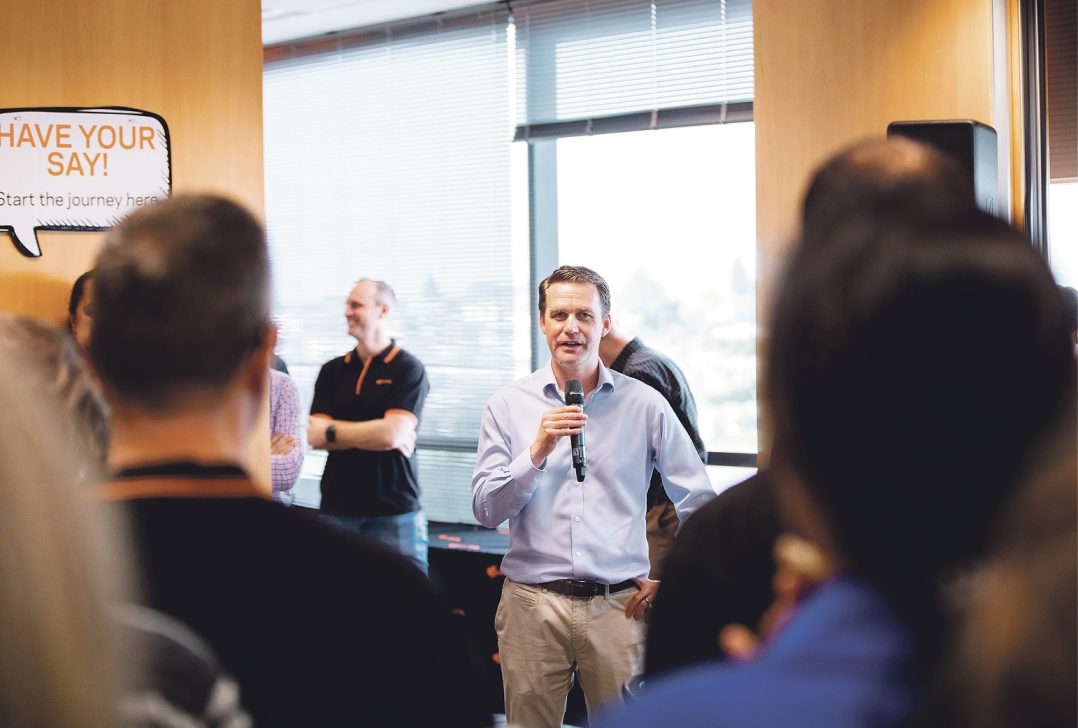 Kahl Betham talking to staff about the future of work.

The strategic plan was put in place after what Betham says was “minimal growth” for the security division, including a loss-making year.

Since then, the numbers have been highly impressive as the company sees what Betham describes as a 20 year graph that is now showing “hockey stick” growth.

Betham says at the end of financial year 2015, the security business revenue was $50 million, and last year it broke through $100 million.

“This year, it’s 30 percent growth, and we now have plans to be $500 million within five years for security alone.”

The company is targeting what Betham calls the high end of town as it pours resources into R and D and innovation. It is certified to the highest level of national security in Australia, the US and New Zealand, and is aiming for the same in the UK.

It has nuclear power plants, prisons, banks, universities and Parliaments around the world among a growing base of clients.

“Everything that’s either got a large number of buildings, a large amount of access control, or a large amount of risk of some kind, so high consequence. We look after all the power and gas in National Grid UK,” he says.

Betham says the high level of security clearance is one reason why America as a region is growing strongly for the company – more than 80 percent this year, off the back of a number of years of 40-50 percent growth.  “We’ve decided  that’s a real capability we have: you go from 100 competitors down to under a handful. It’s a really high-consequence, high-value space.”

He says Gallagher believes it is the most globally certified company in its space because it sees different competitors in each country where it operates. That enables it to secure contracts that span countries, and Betham says it is starting to get government to government referrals.

Providing the combination of software and electronics makes for a unique offering, he says.

“We call it personalised work experiences, working out what things can be flexible in what departments and providing enough autonomy to each of those leaders in a high trust way.”

“It’s really  unusual still to find a security provider that  has the software and the electronics piece because a lot of others are focused on either being a software expert or an access control controller or reader expert. And we’ve kept that whole ‘end to end’ because we think it’s a better experience.

“We’re able to innovate across the experience by having control of those pieces.”

Having the factory in Hamilton is important, he says. “We are spending more and more and more on innovation, which is critical to how we manufacture here.

“We can’t compete on price. So we have to target areas where there’s high value, and you sell at high value.

“It’s not a price-sensitive market, but they do expect a lot and require a lot for their money. So if we’re better, we can keep manufacturing here. We’ve been fighting commoditisation with R and D.”

Manufacturing in Hamilton means they can meet requirements of governments around the world. He says the company made a conscious decision during the last downturn not to shift manufacturing to China, despite the potential savings. “Had we gone to China, we wouldn’t be able to get certified.”

The company is also trialling a security system for SMEs, which can be self-managed. “We’ve decided to create a variant of our product, a cloud-based variant for small to medium business, and we’re piloting that now,” Betham says. “That will open up the other 80 percent of the global market.”

The company is treating it as a separate business within security. It anticipates a full release within the next two quarters, and is likely to take it offshore before year-end.

These days the growth in security is being driven by Mark Junge after he took over as general manager when Betham was appointed group deputy CEO in April last year. There was continuity in the appointment as Junge had been a chief operating officer alongside Betham in security.

“How did we go from a $50 million minimally or unprofitable business to a globally successful, highly scaled one?  We did a massive culture change.   We had to really focus on culture and we had to restructure. We had to basically stop doing things the way we always had done as a small business, and actually set the thing up. So we put a strategic plan in place, which we executed over the following four years,” Betham says.

“We assessed what the most lucrative targets were and focused on those, we put the right people in the right places and we got the thing moving. So it was a really big transformation story.”

Now the company is embarking on further culture change, across the whole group and involving staff at all levels, in what Betham describes as a co-design of their work future.

Betham says when he started in the deputy role, they got all the executive teams together – a first for the company – off site for two days to talk about the future of the group and modernisation. They agreed on key themes, including diversity, environmental and sustainability issues, and flexible work practices.

They also recognised that staff needed to be fully involved, and began a consultation process which included a one-day future of work expo for all of the staff on site.

“We asked for their feedback, their raw insights, and killed quite a few thousand Post-it notes.”

Flexibility came through as a core concern for staff.

“That’s a workforce mega-trend – that people want more flexibility in general about how they organise their lives and manage the balance of their home and their work life while still providing great outcomes for both.

“We knew that’s a mega trend, and they [staff]confirmed that.”

“It doesn’t have to be one size fits all. That’s the biggest insight – one size does not fit all. Because we’ve got factory workers to innovation workers to sales people remotely working from home to executives to cleaners – we have everything.  So what is equal is not fair, equal is not correct. Equal is not what people need.

”We call it personalised work experiences, working out what things can be flexible in what departments and providing enough autonomy to each of those leaders in a high trust way.”

He says the first focus has been on leadership development and training. “Because the number one indicator of outstanding success or catastrophic failure is leadership,” he says.

They have also engaged an external organisation to help them reimagine the group’s purpose.

He says successful organisations have a clear view of their purpose and their impact on the world.

Betham is loathe to give his own take on what that purpose might be. “You don’t invent your purpose, you discover what it really is by talking to people from the ground up. So we’ll find out.”

That is set to happen in the next six months.

“But then the rollout would be forever.”