Fifteen tractors, a truck fitted out to resemble the human brain and an epic trip from Bluff to Cape Reinga.

It’s all part of New Zealander of the Year Mike King’s drive to help Kiwi youngsters with their mental health.

With the statistics showing an alarming rate of self-harm among younger people, King is on a mission to help, with Gumboot Friday as I Am Hope’s key fundraising venture.

“We’re in the culture change business. And that means having our kids understand that their mental health is just as important as their physical health,” King says.

He estimates he has spoken to more than 150,000 youngsters at schools in the past six and a half years, and is constantly on the road speaking for free to schools and organisations.

The three-week tractor trek is part of that, and will be held in the leadup to the next Gumboot Friday, the annual fundraiser aimed at giving youngsters access to free counselling services.

In 2019, the day raised $1.3 million, which was allocated within five months. King says the biggest uptake was among eight to 11-year-olds, who, he says, will now be better placed through secondary school and beyond. 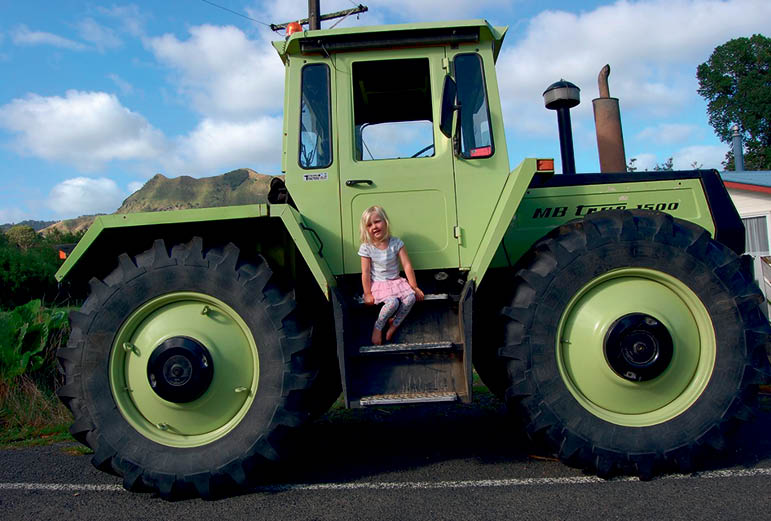 The lead tractor for the trek.

“What we’ve established is there’s definitely a need out there and people take it up,” he says.

“It’s about attitudinal change. Eighty percent of kids and 80 percent of adults who are struggling never ask for help because they’re worried about what other people will think, say or do. Our message is to everyone who’s not struggling and saying to them: What are you doing to make it okay for your mates to reach out and ask for help?”
King says they are aiming to raise $5 million next year when Gumboot Friday is held on April 3. He says every cent raised goes into Kiwibank for allocation to counselling sessions, with none going on administration costs.

The trek, which is scheduled to start on March 3 and will be in Hamilton on March 20, is about raising awareness for the day.

The tractors reinforce a rural focus, and the exhibition area of the truck will provide an experience of passing within a “brain” from the inner voice of self-doubt that King sees so often in the youngsters he meets, through to the voice of reason and positive affirmations. The space will include gumboots from iconic New Zealanders including Fred Dagg’s and those that went to the South Pole with Sir Edmund Hillary. There will also be a board where people can write affirmations. Each day will end with events and a chance to hear from local counsellors.

Businesses are invited to sponsor the trek in their area, as King and his colleague Boris Sokratov seek to raise about $230,000 for logistics and to fit out the truck.

That could include everything from donating funds to a business wrapping a tractor in their brand for a day.

King says he has youngsters talking to him every day about their mental health issues, and that has given him insight into what needs to happen.

“I’m no different from everyone else. What I’ve done is I’ve made myself a safe person. I talk about my mistakes and my vulnerability. And you know, that’s what we need to be doing as a society.

“We all put our masks on and we pretend, and it’s having a devastating effect on our kids.”

Waikato businesses can play their part in helping youngsters with their mental health. If you want to contribute to the tractor trek, contact Sharon Robertson from EMA at sharon.robertson@ema.co.nz