The 15 Vialou Street property, with 29 apartments, is being developed by Atlas Property’s Andrew Yeoman, who also built the recently completed townhouses at 1 Vialou Street.

Nearby, London Central, a high-profile development by Leon Da-Silva on the corner of London and Tristram Streets, is set for completion early next year. It has 39 three-bedroom townhouses and 18 two-bedroom apartments, and is likely to bring more than 100 residents to central Hamilton.

These complexes alone look set to add in excess of 150 residents to the central city mix, while others have also been busy in the space including Black & Orange with the mixed-use Parkhaven building on Tristram Street.

“There is a great buzz around the inner city living as people are now adding the CBD to their shopping list of places to live,” she says.

NAI Harcourts Hamilton managing director Mike Neale points to the new Operative District Plan and the City Living precincts, along with the remission on development contributions in the CBD, as leading to strong demand from developers for a variety of apartment and mixed use style complexes.

“Developers have also experienced good demand from tenants for the end product and the amenity its occupiers get with being located in the CBD,” he says.

Neale has seen increasing apartment demand from owner-occupiers compared with several years ago when he says the interest was largely from investors. He says Parkhaven and The Hills in Hamilton East show there is demand at the higher end of the market.

Deputy Mayor Geoff Taylor, who leads the council’s CBD/River Plan working group, says when it comes to intensive development the focus “absolutely” needs to be in the CBD. He thinks the inner city could easily accommodate another 3000 to 4000 residents, which he says would give critical mass.

“People living there, eating there, shopping there – doing everything there basically. That’s the secret,” he says.

He thinks the CBD is heading in the right direction thanks to some “terrific” development and helped by the council’s introduction of two hours’ free parking. The key over the next three years will be the River Plan, he says.

“But I don’t think we’re going to get the critical mass of people living in the CBD if we carry on as we are with townhouse developments.

“I think what we really need is far more extensive apartment development. That’s where we will get the scale we need. And that’s where we will, I believe, get more affordable pricing for a wider range of buyers.

“The question is, how can we work alongside developers to get more apartment complexes built? We need to be partnering with landowners and businesses and residents, otherwise none of these strategies will work. This is not a city council strategy – it’s a city strategy.”

Yeoman, who also develops elsewhere in Hamilton and in Auckland, says he sells almost all his properties off the plan, and 15 Vialou is already sold out.

He says about 40 percent of the 12 two-bedroom townhouses at 1 Vialou sold to owner-occupiers.

“Typically, what I have found over the years is you get about that sort of mix. Then, over a period of two or three years, the investors sell and owner-occupiers come along so it ends up being more like 70 percent owner-occupied.”

Yeoman says he sells entirely to Kiwis, often second generation with their origins in areas of the world – whether Asian or European – where apartment and townhouse living is common.

“And then you’ve also got millennials coming through.”

The 29 properties at 15 Vialou Street will be a mixture of one-bedroom and two-bedroom, and the complex is likely to be finished next spring.

There will be just 23 carparks, after Yeoman found the absence of carparks at 1 Vialou was no barrier to buyers. He points to Lime scooters, Uber and Loop carshare as good, versatile options. “Or if you want to go away for the week, you go down the road to the car rental place and hire a car for the week.”

Yeoman has also moved into the Auckland market as Hamilton land prices have “escalated” over the past year. “The Auckland market has been a little subdued over the last couple of years, and we’ve managed to take out some sites at some very good prices and be able to do a lot of townhouses.” 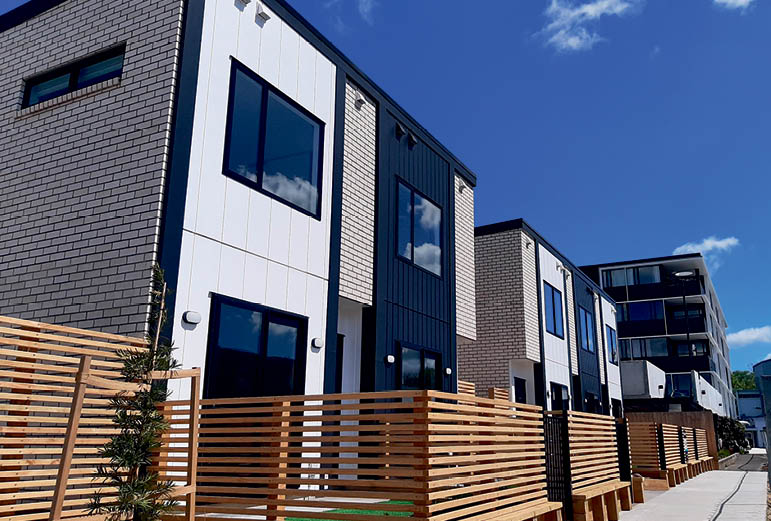 The townhouses at 1 Vialou were fully sold before completion.

Yeoman says he would be interested in further Hamilton CBD development if the opportunity presents but that partly depends on the rising cost of land.

“The developments that we have done in the city, we were lucky to get it within that period of time where council was very supportive of that. We would be looking to the council to see if they can continue the development contribution remissions so that they can encourage more development.”

Taylor says further development contribution (DC) remissions in the CBD aren’t necessarily the answer. “We already have a situation where developers get two thirds DC remission in the CBD and the council will decide whether these continue or get phased out at the next Long Term Plan in 2021. Personally at this stage I favour retaining them but will keep an open mind.”

Mike Callagher, of Cornerstone Developments Waikato, is positive about the industry and the city but agrees that rising land prices are an issue. “At the moment, land’s very hard to find, especially because the prices have just gone absolutely nuts.”

He recently completed a townhouse development at Hunter Street on the southern fringe of the CBD and has just secured resource consent for a major apartment development in the central city.

Like Yeoman, he sells virtually everything off the plan, which he says is useful given the time it takes to get consents.

“We’ve got to be sort of six months ahead of the next project so that we roll into it,” he says.

“They say they’re getting rid of red tape but all they do is ask for new things every time.”

He cites a recent consent which should have taken 20 or 21 days but which had a couple of weeks added because of a request for information. “It’s all good, I mean, it’s fine, but we just have to plan so much further forward now.”

Both Neale and Williams expect a boost for CBD retail and hospitality from the increase in central city residents.
“In particular hospitality supports population growth; therefore, as the market continues to grow so will the offerings,” Williams says.

Neale points out pedestrian counts over the last 12 months are already 4.8 percent higher than the year before. He says Hamilton is increasingly topical in conversations with corporates, central government and retail brands.

Born and bred in Hamilton, Mike Callagher develops only in the city.

“At the end of the day, you know, we’re an awesome city. Our growth is massive and we’re such a central place to live.”