It has also seen him take out the Foster Construction Outstanding Leadership Award at the We Are Waikato Property People Awards. 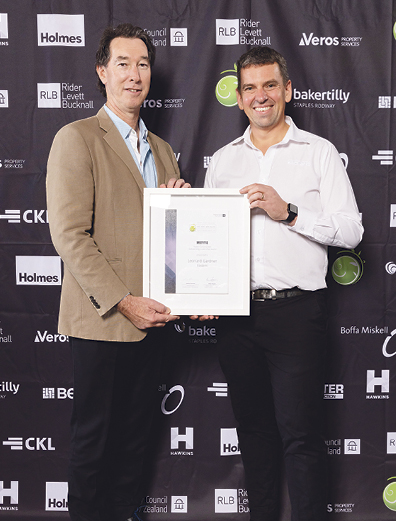 He is modest about the win, saying any such recognition really comes from the privilege of fronting a wider team.

“When people are the most important thing, you work out it’s not about how smart you are. It’s actually about how engaged the people are you’re dealing with.”

That means it’s not about having a hard and fast way of doing things but about meeting people where they are at and then journeying with them.

In Gardner’s case, he is describing an approach both to business and to community, which looms large for him. He brings a strong Christian faith to both.

Gardner says he understands it was people from the community, rather than from Fosters, who nominated him for the award, which he describes as humbling.

“Momentum Waikato is very much about creating better community. And that obviously aligns with the Fosters purpose of great communities through strong foundations, and aligns with my personal values which are biblically based around ‘love your neighbour as yourself’.

That ethos guides an approach that sees generosity as an important part of leadership. “You can’t do that [love your neighbour]by being selfish. You know, it’s actually a generous act,” he says. “Servant leadership is actually all about serving others. It’s about giving of yourself to others in order to lead and guide.

“I think the leadership award was recognition of the ability to have a vision. And to carry a vision and draw people around the vision and move forward.”

The focus on people has helped put Foster Construction in “fantastic” shape, says Gardner who started there as company accountant in 2003 and bought into the firm three years later.

“In an industry that really struggles,  we’ve built an amazing team. We’ve got a sustainable business, because we invest in people at all levels. We’ve got an amazing client base who just trust us and we honour that trust. And all those things mean we’re really well placed moving forward.”

A key upcoming project is Union Square, the major CBD office development planned for the site bounded by Anglesea, Hood and Alexandra Streets. As Ebbett Holden moves out, the 10,000 square metre site will become a mixed use development including six landmark buildings enveloping a central plaza. Gardner says they are hoping to get underway early in the second quarter of next year, with some significant tenants lined up.

Looking back over the past year, he singles out the APL development at Hautapu. The relationship has been long term, with Fosters also responsible for the company’s earlier Hamilton buildings going back 25 years. “We’ve always worked for them and it’s been a high trust relationship.”

But Gardner also says a highlight of the year would be dealing with small to medium businesses around the Waikato to help them grow.

Looking at the broader picture of Hamilton and Waikato, Gardner is positive despite the high cost of growth.

“I see a number of leaders coming through in different sectors of the community, for profit and not for profit, who are passionate about Waikato and Hamilton as their space and home.

“I think generally people believe we’ve got a very livable city and we’ve got a fantastic place to bring up families and a fantastic community to be a part of, as a general rule. And people want to continue to see it become better and are prepared to invest.”

It comes back to vision for Gardner. “I think the city in particular has got more of a vision now about where it wants to be than it did 10 years ago, even five years ago.”

When it comes to vision, Gardner asked an intriguing question at a mayoral forum during the election campaign. Imagine a benefactor who gave the city  $1 billion to spend as they wished but not on debt reduction. What what they do? The answers were varied, with Andrew King perhaps stealing the show by saying he would build a subway.

What would Gardner himself do? The answer starts in Munich earlier this year, when Gardner saw how well their light rail system worked. Given the talk about how Hamilton could become New Zealand’s second largest city, he thinks now would be the time to build our own light rail system. It could use the Wairere Drive corridor as part of a ring route while also connecting into the centre of town as well as pushing out into surrounding towns. “If there was a light rail system within the city that connected up with those things, then we’re poised for managed growth.”