Shop by shop, development by development, the momentum is there in central Hamilton.

From increased transport offerings to a developing focus on the river, from the thriving hospo scene to the growth of apartments, Williams sees a city in good heart.

“We are building the CBD that we want to have. It’s fantastic,” she says.

With that momentum comes adaptation to national and international trends, including a shift from large retail tenancies to boutique, smaller, more stylised shops.

“That’s where the niche is for CBDs. It is more about that mixed use: retail, business, residential all living together,” Williams says.

“People don’t just come in to go to one shop, or come in to do one activity like they used to, or one service. People are coming in wanting experiences, they’re wanting to actually hang out and do things.

“Walking around the CBD, that’s what I’m looking for. It’s to see that we have got that mix of offerings right.”

The best of those offerings were front and centre in September at the annual CBD Celebration Awards, which Williams is responsible for.

Competitors and guests on the night were treated to a classic piece of Williams theatre as for the third year in a row she chose a venue that highlighted the connection to the river.

Two years ago it was the industrial vibe of Riverbank Lane, last year there was heritage at the former Hamilton Hotel, with a message from the Queen, and this year it was the turn of the disused former IRD building overlooking Claudelands Bridge. 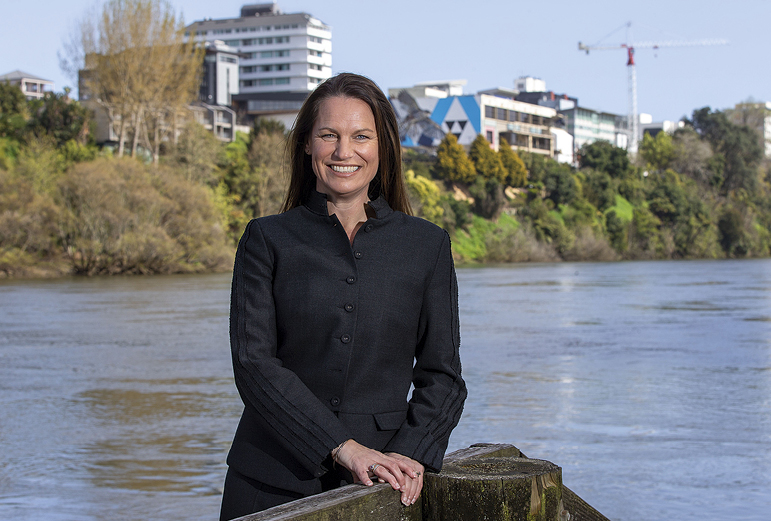 “This one, I’d say was very modern in terms of how it was dressed by Royal Lab in the evening, and the way that we were showcasing the CBD with pictures,” Williams says. “It was all about creating that modern, ‘this is now’ feel of the CBD.”

She pays tribute to contributing businesses like Royal Lab and SBI Productions, as well as developers and project managers who she says over the three years have willingly given their spaces and their time.

The awards are in two parts. Williams describes the “success” component as traditional sector awards, with nine judges this year, all Hamilton based. Among the winners were KILT Hamilton in the retail category and BCD Group for innovation.

Then there are the “best” awards, which she says are around activities or people that are contributing to the look of the CBD, and are judged by the association’s executive committee. It gives an opportunity to respond to social change, and this year they added sustainable practice and inclusive practice awards.

Also among the winners this year was Parkhaven for best improved site over $500,000. Williams describes it as a classic example of the sort of mixed use development the central city needs as views change.

“A lot of the design changes that are happening worldwide are around that opening up of places, so more about that free flow around areas. That’s why you are seeing so much more mixed use developments happening.”

Parkhaven also neighbours the western town belt, which figures on Williams’ list of central city attractions. Perhaps surprisingly, however, for someone who lives, breathes and advocates for the central city, Williams doesn’t have a favourite spot herself.

“We also have a great mix of hospitality, from award winning coffee places through to ethnic eateries to whole streets that are really cool.

I would like to see that message getting out more and more – that you can walk the length of Collingwood Street and you are practically in an Asian food festival, there are just so many different eateries.”

Her fondness for walking means she is unlikely to be seen on a Lime scooter, though she has given them a go and is an enthusiastic supporter.

“It’s quite interesting. I was chatting to somebody yesterday, who was saying that she will jump on a scooter to go between meetings because it’s really convenient. There’s no accessorising that has to be done,  and away she goes.

“But then in saying that I also love the Loop cars that we’ve now got around the town. I think they’re great, the fact is they are really economical and they’re really nice cars. The offering is great. and so in the space of about two months we’ve upped the ante in our transportation, and I’d just like to see that happen more and more. I’m big time in favour of rail into the CBD, and water taxis – but I don’t know how practical that is.”

Meanwhile, Williams already has next year’s celebration awards venue in mind and isn’t giving much away, other than it will be quite different from the last three and will once again showcase the riverscape.

“And I keep saying that maybe one year, we’ll try and pick a place that has, you know, toilets, running water and electricity before we start – that would be would be great.”

Has she done that for next year?

Williams laughs. “No. But maybe the year after, who knows?”

Key is to tell a story

HCBA general manager Vanessa Williams says the number of award entries has grown each of the three years she has been organising them. The key for entrants is to tell a story.

“It’s not an arduous process. It is knowing why you are here and being able to tell us that. We’re not about declaring your finances and doing all that side of it, we are about vibrancy and regeneration, all that sort of thing.

“So we want to hear the stories of why you are here. That’s what we want you to stand out for: what are you achieving, what’s your purpose, why did you set up here, how have you been able to create your business in this space, and what are you doing with it?

“It’s amazing for us to read the stories – you think you know someone or you know a place and then you hear a bit more about what they do, what their ambitions are, where they’re looking to take it and you’re just like, wow.

“I think as a city we need to recognise more that we’re not just locally here in the CBD, our businesses are competing nationally and internationally. Some of the accolades and awards and innovations that come out of here are just brilliant.

“I feel like I’m on this positivity train to get that message out there.”