He announced the investments at a function in August at the Ahikōmako – Centre of Māori Innovation and Entrepreneurship at Te Wānanga o Aotearoa in Hamilton.

The success of SSEP is underpinned by a collective approach between Smart Waikato, community philanthropic organisations, corporates and other funders over the next three years. For 2019 WEL Energy Trust, Te Waka, Waikato Farmers Trust, SKYCITY Hamilton Community Trust, Mercury-Waikato Tainui Partnership, J & G Gallagher and the Gallagher Trust have pitched in to help. 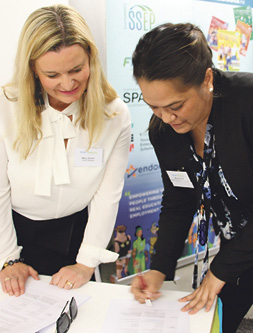 The funding will generate jobs for young people by enabling Smart Waikato to work with 140 existing SSEP employers to develop and promote entry level work opportunities, linking back to further education where applicable.

“This is fantastic news for the Waikato and for everyone who has been involved with SSEP over the past four years,” said Smart Waikato chief executive Mary Jensen.

By 2021 10,000 students will have been enrolled in SSEP in 43 of 50 secondary schools throughout the region. Schools with a high Māori population will be a priority.

“As the region’s economic development agency, our role is to facilitate economic growth. Helping Waikato businesses and organisations gain access to the Government’s Provincial Growth Fund is an important part of our remit.

“We’ll use this funding to provide hands-on assistance to support organisations to develop their business cases and applications to the PGF.  This new service will accelerate Waikato applications through the system and give submissions from our region the very best chance of being considered for funding.”

Jones also announced just over $700,000 for the redevelopment of the Paeroa Historical Maritime Park Marine Development.

The Historical Maritime Park Marine Development includes four elements: construction of a wharf, installation of two floating pontoons, purchase of a vessel to transport passengers and bicycles between landing sites and construction of a 256 metre board walk to connect the pontoons.  Landscaping will also be carried out.