Bernie Crosby, left, at this year’s awards for CELF, an organisation which he co-founded.

Well-known Hamilton business and philanthropic team Bernie and Kaye Crosby were two of 10 businesspeople inducted to the NZ Business Hall of Fame at a black-tie event on August 15 at Auckland’s Cordis Hotel.

Established in 1994 by Young Enterprise, the New Zealand Business Hall of Fame recognises and celebrates individuals who have made a significant contribution to the economic and social development of New Zealand.

Bernie and Kaye, who were both awarded the ONZM for services to business and philanthropy in 2014, established the now international multi-million-dollar business Prolife Foods from a garage in a Hamilton house they were renting in Darley Street in 1984.

The couple sold dried fruit and nuts to health food shops, and their key piece of equipment was a set of green Salter scales that belonged to Kaye’s mother, Betty Pickett. Their Triumph 2000, with the back seats removed, doubled as a delivery vehicle.

Bernie said he was motivated to start the business after the sale of his share in a real estate company. After placing an ad in the local paper, he came across an opportunity placing hot nut vending units in dairies. Following on from this he purchased Turkish apricots to recover a debt from a loan. 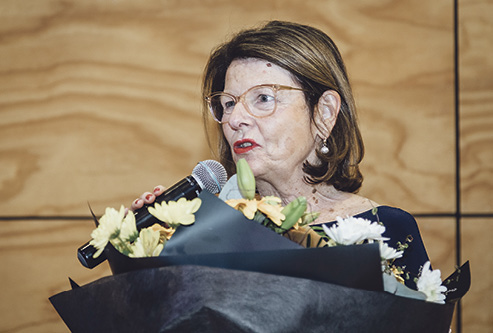 “The timing was perfect, and the removal of import controls gave access to new products. This coupled with the growing  health awareness environment helped.

“I believe you have to be motivated to achieve. Twice we failed, and once overnight lost $2 million worth of business, but we motivated the staff, ensuring no staff losses and recouped in no time at all.

“My two tips for success are to surround yourself with good people, and to realise motivated people don’t need motivating.”

A few decades on, Prolife Foods is one of New Zealand’s largest privately owned and operated food businesses having progressively established and acquired brands such as Alison’s Pantry, Value Pack, Mother Earth, Flemings, and Donovans.

While Bernie and Kaye both remain on the board of Prolife Foods, they are spending increasing time on their philanthropic interests.

In 2015, to acknowledge the benefit that Prolife Foods had gained from The Icehouse Programme, the Crosbys donated $100,000 to kick-start a scholarship fund to encourage other businesses to participate in Icehouse programmes. Bernie is also a member of the Ice Angels – an angel investment network – and the couple has invested in various Icehouse start-up investment funds.

In 2013 Bernie co-founded CELF, a community leadership programme backed by The University of Waikato.

But perhaps their most notable achievement has been the establishment of the Neuro Research Charitable Trust in 2013, of which they are both trustees.

“With this in mind, and with a desire to pay forward and give back for our good fortune to date, we started the NRCT.

“Once Bernie was diagnosed [with Parkinson’s], we set out on a mission with the mantra ‘no dream too big’ to raise funds to help find a cure for this hideous and intractable disease.

“Bernie went public with his affliction to raise public awareness.

“In five years with our amazing committee we will have raised $2 million for the cause.”

Early success for the Trust came in 2017 when researchers at the University of Auckland provided the first strong evidence on how Parkinson’s disease spreads in the brain. The research is credited with helping to advance treatment of the disease.

Research leader Associate Professor Maurice Curtis from the University’s Centre for Brain Research was quick to credit the Crosbys’ role.

“This vital work was funded by the Neuro Research Charitable Trust founded by Bernie and Kaye Crosby who have fund-raised to support this work and who have been strong advocates for Parkinson’s disease research in New Zealand,” he said.