Roadside stops come with a cuppa.

A Waikato inbound tour operator is launching a new brand as it marks continuing growth from its Hamilton base.

The latest offering by Leisure Time Tours comes after its acquisition in recent years of two other city-based inbound tour operators.

Managing director Scott Mehrtens is not ruling out further acquisitions and products as the company pushes ahead in both the leisure and business markets.

Its latest offering, Pure Discoveries, caters for smaller groups and is a development of the free and independent (FIT) market, which makes up about a quarter of Leisure Time’s clients.

The company had already acquired Travel Time South Pacific and Agritravel, the latter with a strong agribusiness focus.

Leisure Time Tours, which was founded in 1987, employs up to 60 staff during seasonal peaks, including around 20 office staff working at its Greenlea Lane base and a similar number of coach drivers based in Waikato.

Mehrtens says about 90 percent of the firm’s business is international inbound, and it brought just over 8000 travellers to the country last year.

With its itineraries averaging 17-18 nights across both North and South Islands, it accounts for more than 100,000 bed nights annually, including regional New Zealand.

Leisure Time Tours operates its own coach fleet, the only such company in New Zealand to do so, Mehrtens says.

The advantage is quality control, Mehrtens says. They had become frustrated by the quality of coaches they were hiring and the lack of consistency, so started buying their own fleet in 2000. Considerable investment has seen it build up a fleet of 21.

New Zealand is a quality market, rather than a quantity one, Mehrtens says.

“We make sure that the drivers understand, you don’t work for a coach company, you work for a tour company. Your job is to deliver a high standard of service,” he says.

Leisure Time Tours is well positioned as tourism continues to grow in New Zealand, with travellers increasingly drawn to the experiences on offer as well as to this country’s scenery.

Mehrtens thinks the recently launched 100% Pure Welcome campaign acknowledges the change. He says Tourism NZ has recognised visitors don’t come to New Zealand only to see the natural landscapes, major drawcard though they are, but also want experiences with Kiwis and with Māori culture.  “It’s those genuine visitor interactions that people are chasing.”

That sees the company approaching operators to ask if they can offer an experience for visitors – it could be as simple as not just visiting a bakery but also having the chance to make a pavlova.

Most clients come from Europe, Australia and the US, and Leisure Time’s size as one of New Zealand’s bigger inbound operators sees it dealing with thousands of agents.

“As airline connectivity increases, those markets that we’re already working in will only get stronger,” Mehrtens says.

“If they can start tapping into New York direct nonstop that will be a game changer, I think. That also opens up the entire east coast.”

Leisure Time Tours has been able to ride out global downturns, with only one non-growth year of the 22 Mehrtens has been with the company.

Looking ahead, Mehrtens is upbeat in the face of disruptive technologies, in an industry that he says has been averaging 5 percent growth annually for the last 30 years.

“Technology is going to have a huge part to play in our industry, but what technology can’t offer is the people element.”

That includes, he says, the ability to negotiate good deals thanks to group bookings, local knowledge and connections. It also means offering a 24 hour service seven days a week to deal with the likes of road closures due to weather events.

As for Airbnb, once again he has confidence born out of his years of experience. “If people are going to buy on line then it frees up commercial accommodation for us to be able to sell to the commercial entities.

“They are a disruptor. One thing that’s constant in our industry is change. It is not the same as over 30 years ago when I was doing my training. We’ve had to grow and evolve and constantly change.

“One of our core values in our business here is embrace change.”

That sees the company continuing to expand its MICE (meetings, incentives, conference and exhibitions) offering, recently adding Vokali, which focuses on the business market.

When it comes to recent changes, Mehrtens is comfortable with the conservation and tourism levy.

Leisure Time Tours has negotiated its own concessions with the Department of Conservation, rather than rely on the umbrella concessions available through tourism groups, and a point of pride is the Gold Qualmark achieved last year for its attention to sustainability and community.

“We were very thrilled to get the gold. We work pretty hard in that area,” Mehrtens says. “We’re a family organisation, we support the schools, we support the Lions Clubs, we support the PTAs that approach us, but we also look at the bigger projects that New Zealand is offering as well, like the kiwi programme at Rainbow Springs.”

Meanwhile, in terms of the company’s development, it’s a case of watch this space.

“The acquisitions that we’ve made have worked nicely for us. It’s added strength to our business, it’s grown our business, and we’re all about growth. We’re always looking for opportunities.

A business is born

Leisure Time Tours’ foundation story deserves retelling. Les Mehrtens was services manager for a Hamilton bus company in 1987 when he saw an opportunity. It was a school and charter operator, and Sunday was the day he and son Scott serviced the fleet because none of the vehicles were in use. While that worked for Les in his role, it also meant the buses were underutilised. He suggested to the owners that he could start offering tours on Sundays and during school holidays. Terms were quickly agreed and he began approaching organisations involved with older people, such as Age Concern, to offer day trips.

This was to be a business that started out of a bedroom – the twist is that it was Les and wife Barbara’s son’s bedroom.

His parents moved the dining room table into his room and it became their office.

Scott remembers the phone ringing through the evening as senior citizens called to book their outings.

Much appreciated by the guests were the roadside morning teas. Scott can recall boiling a big urn of water in the laundry at home and helping lug it outside to the coach so guests could enjoy a cuppa in a suitably scenic spot later in the morning. The legendary morning teas are now being incorporated into the Pure Discoveries tours, though these days the boiling of the water is less hazardous. 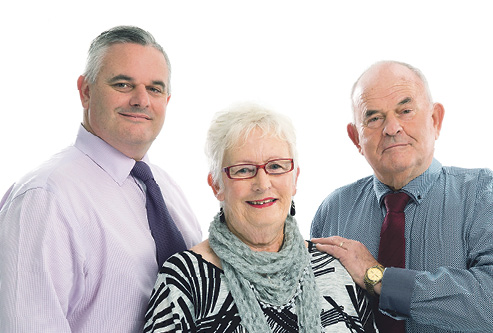 One Sunday a month soon became two Sundays a month, then every Sunday, then Sundays and Wednesdays, as the tours caught on, and school holidays would see short tours to the likes of Napier or Taranaki.

Les began offering longer tours and that is where the next breakthrough came in. He was taking a  group around the South Island and kept bumping into an Australian driver. After a while, the Aussie said to him, you know, your group is always cheerful. How about the next group I bring out, you drive them around? Les was fine with that. Do you know about the North Island as well? Of course, was the answer.

So Les started driving overseas tourists around as well. He still does: the business may have grown unrecognisably, but for Les it’s all about the interactions, and he leaves the office work to Scott.

“His passion is showcasing New Zealand,” says Scott. “That is how we’ve managed to grow our company so significantly – because of his passion. He sets the standard for everything and it is up to us to live the values of Les.”

Leisure Time Tours managing director Scott Mehrtens says there is “definitely” space in Waikato for cultural tourism but cautions that it needs to be carefully worked out.

As an experienced tour operator he is very aware of the requirements of the industry.

“It’s a bit of a tricky one to get right because even our product managers who are knowledgeable, intelligent people have very different views on what their expectations are around cultural tourism. They want it to be genuine, they want it to be authentic, they want it to be at the same time professional and well structured. So how do you get all of those things into one activity? Logistically, it has to work.”

He points out the hāngi experience in Rotorua is at night because visitors are staying overnight.

“It’s going to take time to build that and build confidence in that as well. it’s not just build it and they will come –  it’s build it but make sure you understand the industry before you build it.”