The name, Vetora, says it all. “Vet” and “ora” meaning “land” in Latin, or “health and well-being” in te reo Ma¯ori. So Vetora, “vets of the land” and “vet of health and well-being”, ties in well with the expansion of the business and the care it provides for animals big and small across the Waikato.

For more than 75 years Vetora has been caring for animals, farmers and families in the Waikato region. 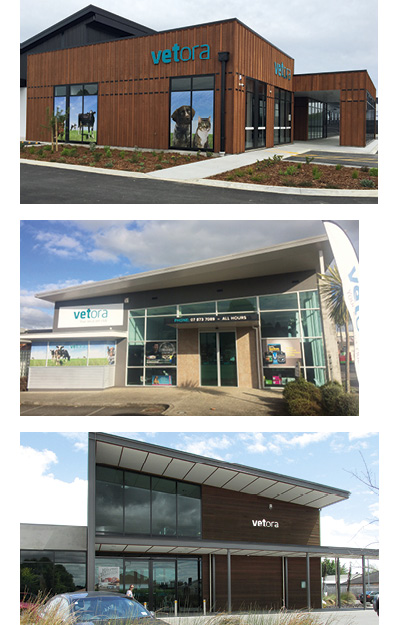 Under the Te Awamutu Veterinary Association, the business has been catering to the needs of animals for generations. It started in 1943, during the war when global food shortages drove government initiatives to lift farm productivity. It was recognised that veterinarians were required in rural areas so local farmer groups banded together, often associated with regional dairy companies, to form Veterinary Clubs by employing a veterinarian to service the farms and local communities.

At that stage, New Zealand didn’t have a vet school, so most of the vets were sourced from overseas. The Te Awamutu Veterinary Association has over the years grown into a veterinary business serving all animal owners from Hamilton through to Taupō with eight clinics employing more than 50 veterinarians.

Soon after, The Vet Club opened to the public in the Bay of Plenty. The organisation was similar to the Te Awamutu Veterinary Association, with the same purpose and a long history of serving the rural community. The two businesses decided to form Vetora in 2015, and while they did not technically merge and remain independent, they established an overarching brand to serve both regions.

What started as a not-for-profit vet club has grown considerably over the last 15 years, taking care of all animals from household pets to production animals. Vetora has continued to expand, with vet clinics now in Te Awamutu, Hamilton, Cambridge, Otorohanga, Putaruru, Tokoroa, Taupō and Whakamaru.

Vetora Waikato CEO Gavin Shepherd said the plan was to build a solid, strong business that would be around for the next generation of farming clients. They also wanted to look at small animal business growth to reduce their dependence on farming and large animals.

Shepherd said the business strategy is to now maximise opportunities provided by the scale that they’ve increased to.

Its purpose is simple: CARING for animals, farmers and families.

The 2017-2018 year was a busy one, with more than 10,000 vaccinations on small animals (cats and dogs) and a considerable yearly increase on heifers teatsealed and calf disbudding.

In 2017, a new Vetora clinic was built in Hamilton on Collins Road, and provides an excellent small animal facility including a dog wash and a cattery.

Over the years, Vetora Waikato rural manager Adam Hittmann has seen a change in the care of small animals. Cats and dogs have become more than just pets; with changing attitudes and demographics they are more a part of the family for a lot of people. Moving with the times, there’s no way 20 years ago people would have used a 24-hour dog wash. Some customers are also willing to spend a lot of money on their animals.

While all of the clinics offer large animal and small animal services, they all slightly differ, as they cater specifically to that community. For example, Hamilton cares for predominantly smaller animals, such as cats and dogs, while rural Otorohanga and Putaruru have more clients for larger animals.

Vetora’s 50 veterinarians come from all over the world, mainly from New Zealand but also from Australia, UK, USA and South Africa, with specific skill sets and veterinary interests. It has young Massey University recent graduates through to vets of 30 years of veterinary experience. Some of the team have been there for more than 20-30 years.

Its purpose is simple: to care for animals, farmers and families. It provides expert and friendly support throughout its clinics and has a focused team of professionals specialising in looking after farm animals and pets.

The publication profiling the best in agribusiness in Waikato.