Hospitality is the new retail when it comes to town centres, drawing the crowds that once came purely to load up their shopping bags.

That was the message from First Retail Group managing director Chris Wilkinson in a presentation to a Cambridge audience which emphasised uniqueness as the key to success, and is likely to resonate for retailers and civic leaders across Waikato towns.

“Once upon a time, retail was the anchor of the town or city centre,” he said. “No longer. Food and beverage, hospitality, is the real anchor. That’s the thing that draws people.”

It may be true that customers are no longer knocking at the doors at 9am wanting to get into the shops, but at 10 o’clock the cafes fill up as business people meet over coffee.

Town centre design needs to take account of the trend, ideally interspersing hospitality with retail to give a daily or twice-daily connection, drawing people past the stores, “creating that footfall that’s so necessary for retail success”. 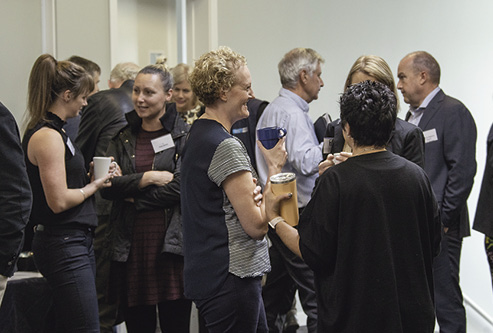 Locals heard about the key trends in town centre use, including provenance, localism and the environment.

Further fuelling the shift is a move towards experience over product, Wellington-based Wilkinson said at the breakfast meeting organised by the Cambridge Chamber of Commerce and Waipā District Council.

“Things that are unique, that are Instagrammable, those are the things that people are wanting. Our younger generations are into these micro moments,” he said.

Other key trends are consumers wanting to know about the provenance of what they are buying, interest in supporting local enterprises and the increasing value placed on the environment, he said, as he urged Cambridge to differentiate itself. “That’s what drives success in town centres, being able to establish that USP [unique selling point],” he said.

The town had strengths to build on, with statistics showing strong growth in customers coming from outside the town, including 11 percent in international consumers.

“Eleven percent is quite spectacular. We’ve been working with other areas in New Zealand which are happier at much lower figures.”

There was one warning sign, the 7.4 percent “spending leakage” of local consumers spending outside the town.

He saw Cambridge as having a natural warmth and cohesion. However, in what is a very dynamic market including strong population growth, businesses need to look closely at consumers’ needs and expectations rather than make assumptions based on previous experience. “At every stage of the process Cambridge needs to be taking the pulse of its customers and adapting accordingly.”

Business was increasingly driven through consumer advocacy, including social media.

“The advertising we used to do in the past, it’s all driven through advocacy now.”

Digital visibility was vital as visitors made key decisions online before reaching a town like Cambridge. He cited Wellington, where Courtenay Place was virtually empty after a Lions test as visitors found their way to back-street bars and restaurants that supposedly only locals knew about.

He said the social aspect of a town centre was important, and the connection that it gives people.

In his presentation, Wilkinson also gave examples of town centre revitalisation from New Zealand and around the world, based on First Retail’s extensive experience since it set up as a consultancy in the early 2000s. That experience last year included projects in Dubai, the UK and Australia.

Gore remade its town centre after the mayor recognised the threat posed by online shopping as local couriers doubled the size of their vans, Wilkinson said.

“Ever since then, they have been very firmly focused on resilience and performance for their retail sector. Their work is being recognised around the world for developing much stronger cohesion.”

Its Love Gore, Shop Local promotion was so effective that Wilkinson cited the example of a local woman who had driven halfway to Dunedin before remembering the slogan, turning back and buying the jewellery she wanted in Gore.

In Queenstown, where First Retail has also been involved, one strategy outcome was $2 bus fares and the pedestrianising of Beach Street, in recognition of traffic’s detrimental impact on the town centre’s progress.

Meanwhile, both Shrewsbury in the UK and Invercargill represent dramatic council response to the need to revitalise.

In Shrewsbury’s case, the council bought two large shopping centres to start shaping the centre. “The success was palpable,” Wilkinson said, after he recently visited the town.

In Invercargill, he said the council has a 49 percent share in a property company that is embarking on a $100 million city centre development project. The city was facing significant spending attrition challenges, and First Retail worked with the council to develop a commercial strategy that helped bring the stakeholders together and push along some key investments. “Invercargill is a little bit like Waikato – you’ve got some very resourced individuals and companies and organisations that are focused on the success of that area. Those individuals were wanting to see a strategy to be able to put their money into the right areas.”

Work was also done developing a strong city centre brand. “That was absolutely transformational because as a city without a brand it was much maligned,” Wilkinson said. “Now they’ve got this very strong confident brand – you’ll see that right throughout Invercargill.”

But whatever the council’s financial approach, the message was that strategic planning and coordination were key for towns looking to renew their offering.