When Taupo¯ woman Kylie Leonard has a drink of water in the morning, chances are it’s from her best crystal. She may also be wearing her pearls. Then she heads out for a day on the farm.

Leonard farms on 149 hectares at Oruanui, milking a herd of about 400 with her parents, Jenni Molloy-Hargreaves and Murray Hargreaves.

As Leonard says, her husband Rick “married a farmer”. Last year, her dedication saw her win the Dairy Women’s Network’s Dairy Community Leadership Award, which led to a recently finished stint on a Waikato leadership course. She was also a national finalist in this year’s Dairy Woman of the Year, won by Taranaki farmer Trish Rankin.

The farm is Leonard’s “happy place”. She has had less happy times. Tragedy touched the young Kylie, aged seven, when her father died. The silver lining was witnessing her mother’s strength of character and her stepfather Murray coming into her life. “I’ve had the opportunity to have two fantastic fathers.”

Then in 2002, her house burned to the ground while she was out. The hot water cylinder shorted and she lost everything, including her beloved dog Gus, a Staffie.

Without a co-op I don’t know that things in New Zealand look that pretty for us farmers.

In the aftermath, she was touched by the kindness of strangers, including one man who turned up with two clothing outfits at her parents’ house where she was staying, never to be seen again.

“How good are people!” she says.

She in turn makes sure she regularly performs her own acts of kindness.

The house fire also got her thinking about life in other ways. For one thing, there was the crystal she had been given for her 21st, too precious to use and left to languish in a cupboard. That changed. Life is for living, and now the crystal is on hand whenever she feels like it, as are the pearls.

Leonard was born to farm, and took a considered route to get there. She got a degree in commerce and then went teaching, while building up a property portfolio she started at the age of 18. Ultimately, that helped give her and Rick the equity to buy into the family farm north of Taupō. Even before that, she had worked on the farm whenever possible, building on a long family background.

A highlight of her story involves her grandparents walking from Te Aroha to Reporoa to start a dairy farm. Further back, on her father’s side, her great-great grandfather dairy farmed in Gummies Bush at the bottom of the South Island after arriving from Ireland.

On her mother’s side, her background takes strong personalities including Aunty Gwen, mother of All Black Ken Gray, who farmed at Pauatahanui. “I was always in awe when we would go and visit and she would go outside and whistle the horses. They would come over the hills and roar up to the fence and stop and then you’d go for a ride.”

So there is plenty of farming in Leonard’s background, and she has a deep love of the land.

Kylie and her husband Rick bought into the farm in 2013 when it was also converted from dairy grazing and calf rearing. It’s just a 16km drive from their Taupō home to work, and although Rick, a builder and engineer, doesn’t join her there, the herringbone milking shed build and design is all his work.

They are Fonterra suppliers and Leonard is an enthusiastic supporter of the cooperative model, and has been on the shareholders’ council. 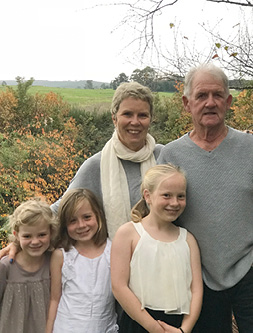 It’s about family – Kylie’s parents Jenni and Murray with Kate, Isla and Eloise.

“I just love the ethos of the cooperative. I love farmers being together, working together, making stuff happen. I think that’s why I really love the dairy industry. Everybody wants to lift others up.

“Fonterra has some faults, it’s not perfect, but we need a strong co-op. Without a co-op I don’t know that things in New Zealand look that pretty for us farmers.”

The farm presents the challenge of straddling two catchments with two sets of regulations. A part bought from neighbours is in the Taupō catchment, while the remainder is part of Health Rivers. They are close to completing a Farm Environment plan ahead of time.

Leonard has always had goals, but the Community and Enterprise Leadership Foundation (CELF) course she went on after winning the Dairy Community Leadership Award kicked that up a notch or two.

Big picture thinking was encouraged on the Hamilton-based course, and Leonard graduated from it in April with a whole new set of “audacious” goals. Within weeks of the course finishing she had climbed Mt Tauhara, near Taupō, with her three daughters, Kate, 11, and the twins, Isla and Eloise, eight, and she had also taken a trip to
Disneyland with her family. During the course, she completed a week-long course with the Institute of Directors and now she is turning her attention to becoming a chartered director.

Current governance roles see her on the board of  REAP (Rural Education Activities Programme) and on the board of her children’s school, St Patrick’s in Taupō. She is also a regional leader with Dairy Women’s Network, Dairy Industry Awards regional ambassador and patron of Taupo Family Playcentre.

She is enjoying the opportunity to talk to groups about farming, and see the realisation dawn for those she presents to that farmers really are doing the right thing when it comes to the environment. But Leonard appears happiest with her gumboots on, out on the farm (pearls optional) with her “girls”, the 400 cows she milks with her parents.