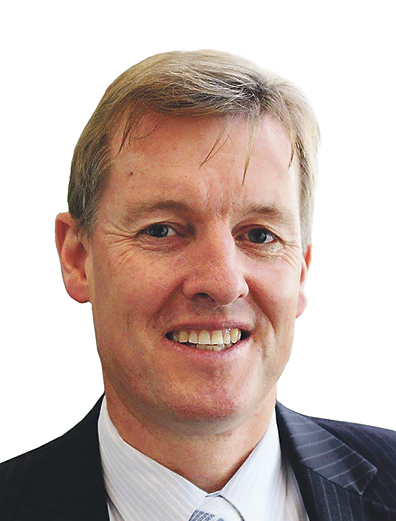 Blair Bowcott says having the Government come to the table is “really powerful”.

Waikato is reaping the rewards of a unified regional approach, with a far-reaching plan to deal with huge future growth from Cambridge to South Auckland going to stakeholders for signoff.

Dubbed the Hamilton-Auckland Corridor, and described as “pioneering” by one official, it comes from a year-long process that has brought together central government, local authorities and iwi.

The Corridor for Wellbeing, Hei Awarua ki te Oranga, centres on the Waikato River, the Waikato expressway and the Hamilton-Auckland rail link. Also known as H2A, it stretches from Papakura in the north to Cambridge and Te Awamutu in the south.

Three areas have been identified for linked development: a Hamilton metro area, River Communities and
Papakura-Pokeno. 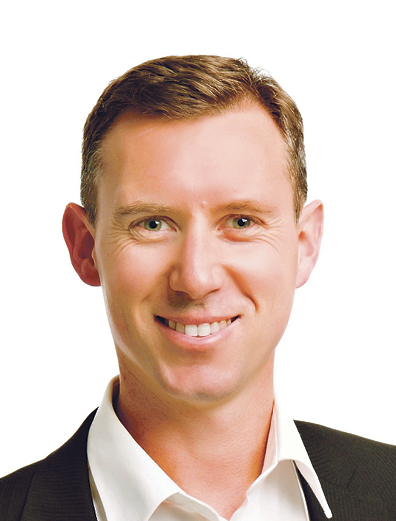 Jamie Strange sees the plan as a
blueprint for future development.

“This is the thing that unlocks a whole lot of stuff that’s sitting in our region,” he said.

“The most fundamental reason why this plan has been successful so far is we’re unified.”

The plan builds on the Government’s urban growth agenda, and its genesis comes from a meeting Labour MPs Jamie Strange and Nanaia Mahuta held immediately after the general election with local mayors, senior officials and iwi.

Strange says he put the question: “What are we going to focus on as a region?”

The answer to that became the Corridor, building on previous collaborative work by local bodies,  iwi and NZTA as part of the FutureProof programme.

Strange’s next step was to approach Housing and Transport Minister Phil Twyford at the Labour party retreat in January 2018.

“For me, this was the key moment. Phil looked at me and said, ‘let’s do something big in the Corridor’.

“That was the moment when I went: ‘Wow, this is going to happen’.”

Bowcott said FutureProof has been planning for growth for about 10 years, largely in response to the expressway. The Corridor, which has Cabinet approval, will become its new major focus. 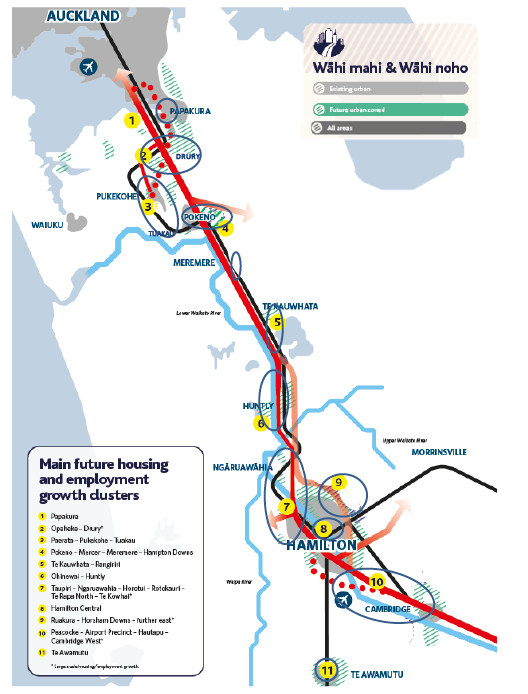 The crucial change is the involvement of the Government, made possible because the Minister could see Waikato’s already unified approach.

“Having the Government come to the table is really powerful,” Bowcott said.

“If you look overseas there are great examples of corridors between cities and satellites. We see the same thing here between Hamilton and Auckland.”

He said spatial planning is one element of the government’s urban growth agenda as it tackles housing delivery and affordability. It is also establishing an Urban Development Authority, which is likely to have a significant role in the Corridor’s development, and is investigating new ways of funding and financing growth areas. Bowcott cited Milldale in Auckland, in which a special purpose vehicle kept the subdivision’s development off the council’s balance sheet.

The limits on government spending mean they want to find the best places to invest their money to get the best return, Bowcott said.

“The Corridor plan provides us with a really good opportunity to get our share of that money because the return on investment is better than elsewhere. The challenge for us is to work with government.”

Spatial plans
The summary document being taken back to stakeholder councils describes the area covered as New Zealand’s most significant water, road and rail corridor, connecting two of the country’s largest and fastest-growing urban areas.

Significant housing and employment growth potential is seen at either end of the Corridor.

The next step will be to add detail through individual spatial plans, with Bowcott leading the Hamilton Metropolitan plan.

He said the idea of an Auckland-Hamilton corridor is not new – in fact, the same term was used by city planners back in the 1970s – but what is new is the whole of sector approach.

Also setting it apart is its exceptionally long-term horizon, with officials considering growth over the next 100 years.

Even a shorter timeframe sees enormous growth pressure. Hamilton’s population is about 170,000, and adding the ring of surrounding towns sees the number rise to between 250,000 and 300,000. Bowcott sees that total potentially reaching half a million people in the next 50 years. (Joblin thinks he’s being conservative, and says it could happen within 30 years.)

The ambition with the spatial plan is for infrastructure to lead growth, Bowcott said, rather than coping retrospectively.

He points to Cambridge and the expressway bypass. “Cambridge growth potentially pre-expressway and Cambridge’s growth post-expressway is exponentially different. The expressway created fantastic links into that community, but also identified and opened up big areas of land that potentially is great for development because of its connection to the transport route.”

Rail is one area to be looked at. Bowcott said talks have identified the benefit of a metro rail service in and around Hamilton.

“The Corridor plan has identified that we think that Hamilton airport, for example, would benefit from land being protected in terms of a corridor through to the airport for rail. It doesn’t mean you build it tomorrow, doesn’t mean you build it in 10 years’ time, 20 years’ time; however at some point rail may be a vitally important link to the airport both in the passenger sense and freight.”

Core to the spatial plan’s approach is that it crosses jurisdictional boundaries between councils.

“We need to think about how this area grows in the long term and work together on it. So that’s going to be a very big initiative off the back of this spatial plan and a really exciting initiative,” Bowcott said. “Because that’s where we can start to think about transport planning together, water and wastewater services together, provision of community facilities together, our acquisition of parks and reserves land together, rather than doing things individually and inefficiently.”

“This is our whakapapa, this is our history, so [we have]a long-standing relationship with that land. But also we have a large footprint in terms of lands that have been returned through settlement, so there’s a massive physical presence.”

She sees Waikato-Tainui as creating opportunities for those marae and helping maintain their sustainability. Some of those opportunities might be around tourism, while there are others around horticulture particularly in the fertile soils at the northern end.

“We’re working closely with them because that will tie into the future planning, whatever that looks like. What we want to do is not do something in splendid isolation but align how we can make best use out of that land with what’s right for the community and what the council wants.”

Waikato District Council planning manager Vishal Ramduny said his council valued the relationship both with Crown and iwi as his council’s area faces growth spilling south from Auckland. One of their next steps will be to develop a high-level spatial plan for Pokeno with a 100-year view, taking in the possibility of it growing to 20,000.

Bowcott said Huntly has been identified as an area for regeneration growth opportunity based on its existing capacity. “Huntly has some business that has left and there is capacity to replace that with others, so there’s an example of growth which can leverage what’s already there in the community.”

That contrasts with Te Kauwhata, which is earmarked for significant growth but needs infrastructure to support it.

“The growth of each of those communities will be informed by environmental considerations, land considerations, infrastructure, the feasibility of growth in those areas, but there’s no doubt that it’s not just about growth in Hamilton: it’s about growth through the Corridor and reflecting the different needs and opportunities of each of those communities.” 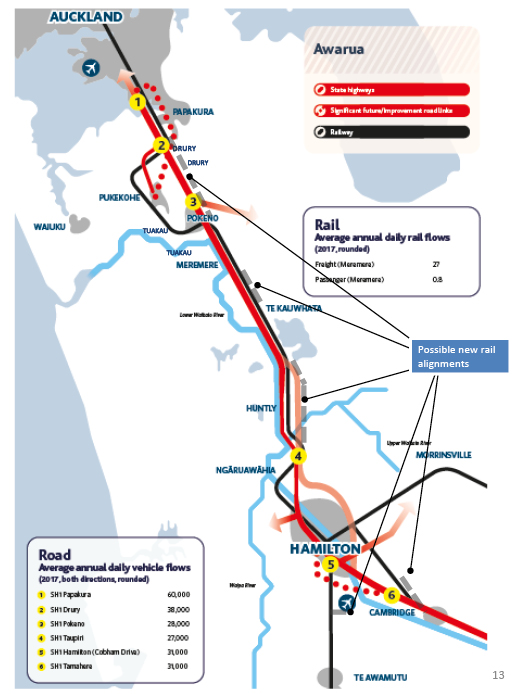 Funding vehicles
When it comes to funding, central Government will clearly play an important role, as it has done already through NZTA funding for road and rail.

Corridor authorities are not alone in facing the barrier of a finite rating base with funds needed to pay for expensive new infrastructure in a growth area. It is likely new Crown funding arrangements will be announced soon, drawing on overseas models.

As for ratepayers, Bowcott said the Corridor plan in itself will not require new money. “It’s really just saying we want to take our efforts from individual pieces of work and bring them collectively together. It will be not an insignificant cost to do this work but we are planning for a very long timeframe, so we need to do this properly,” he said. “Most of the money is largely in existing budgets.”

Bowcott, a hugely experienced local body official, is excited about the Corridor’s potential.

He said it is one of only two priority focus areas in New Zealand, along with Queenstown.

“But at the same time we’ve got a history of working together as councils through FutureProof, and that’s really really important. And if I take the Hamilton area of the equation we’re big enough to have scale but we are small enough to still be agile.”

Strange: “We are sort of in a sweet spot and we know the growth is coming – this is an opportunity to get ahead of the curve. This will be a blueprint for future development.”