The Company-X men and women sound like the team of comic book characters whose popularity led to a series of big screen outings.

Have you heard of the Company-X men and women?

The Company-X men and women are actually a team of real-life software superheroes.

Instead of having the late comic book mogul Stan Lee to thank for putting the team together, it’s all down to a pair of entrepreneurial University of Waikato graduates called Jeremy Hughes and David Hallett.

Both Jeremy and David had built very successful software development businesses of their own when they decided there was super strength in numbers. Together, they would build a business capable of winning work in Silicon Valley. They formulated founding values to guide them.

Whenever possible Company-X would partner with clients, informed by their founding values on every project.

• Do what you said you would do.

• Make the client look good.
• The client has the right to informed choice. 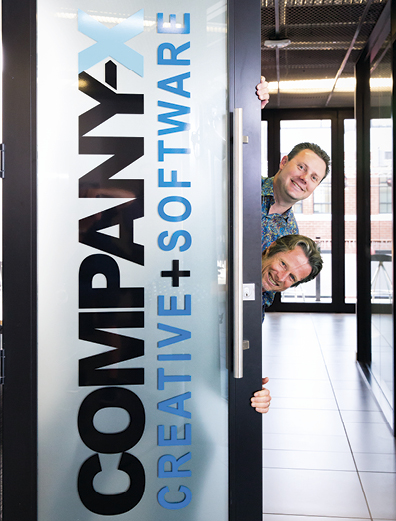 The Company-X men and women love solving clients’ business problems through developing award-winning software that smashes the problems their clients bring to them. Super software makes Company-X clients look good within their own business and with their clients.

Company-X has won so many awards that it needs a super-strong shelf to hold them all. These awards have proved that choosing the Company-X men and women to be your software superheroes will be an action-packed adventure where the good guys always win.

The Company-X men and women won the Service Excellence and Global Operator Awards at the Westpac Waikato Business Awards in 2018.

It was also the second consecutive year that Company-X’s supersonic growth registered on the Deloitte Technology Fast 500 index and was in the Deloitte Fast 50, named the fastest growing technology company in the Central North Island.

“We build projects around our team of software superheroes and trust them to get the job done.

“We encourage our team to ask lots of questions because they uncover the seeds from which smart solutions grow.

“We experiment and adapt so that we shorten the feedback loop between us and our clients.

“We deliver working software as early as possible and iterate frequently.

“We work at a sustainable pace.

“Continuous improvement occurs as we focus on technical excellence and good design.”

“Work is typically done in chunks of about two weeks, based on a backlog of work that has been agreed with the product owner,” David says.

“The team meets daily, for 10 to 15 minutes, to give progress reports and share any impediments to their progress.”