The Waikato Pacific Business Network is looking to build on momentum gained since its launch last year.

It has several event plans for 2019 and is building on alliances with tertiary providers in the region.

Network founder and board chair Meleane Burgess has also been recently appointed to the Pacific Steering Group for the Ministry of Social Development, and says central government’s focus on the regions is exciting.

Burgess, an accountant who is managing director of Dynamic Advisory Ltd, is the sole Waikato member of the steering group, in recognition of her work advocating for the region.

“The Ministry for Pacific Peoples is now focusing on enhancing growth for Pacific peoples in the region through the Pacific Employment Support Services,” she said.

“This is very positive for Waikato given the recent government focus on regional economic development for Maori and Pacific.

“The appointment of the new Assistant Vice Chancellor Pacific for the University of Waikato, Dr Keakaokawai Varner Hemi, earlier this year after the launch of its Pasifika Plan in 2018 is a strong indication of the great strides and progress that the Waikato Pacific community has made over the past five years,” Burgess says. “This is an exciting time for our Pacific people in Waikato.” 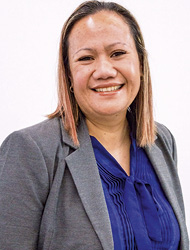 Meleane Burgess is looking ahead to an interesting year.

Since the official launch in May last year at Innovation Park, attended by Minister for Pacific Peoples Aupito Tofae Su’a William Sio, the organisation has been building its membership while continuing to make connections.

Burgess says the network has identified almost 60 businesses in Hamilton alone that are owned by Pacific Island people, from one-person bands to a recruitment company that also has branches in Auckland and Tauranga.

“In the 2013 census it as identified that the Pacific population in Waikato is 17,300 and this number is predicted to double in 2018.”

She says the network’s vision is to grow more sustainable, more profitable and well connected Pacific-owned businesses in Waikato. She says they hope the businesses can grow to the point where they can look to their own community when hiring.

It’s a really interesting journey and I think we’re in at the right time given the hype about Waikato and economic growth.

“We are trying to get those businesses and business owners to say, what are the challenges they are going through as a business owner in Waikato? Because they’re just running their own business blind sometimes. For us it’s more saying to them, it’s okay to ask questions.

“We see ourselves as a platform to connect, share and empower our members. We leverage to the local business community, collaborate and create partnerships with organisations that have the right tools and resources to assist our businesses.”

Their networking events give Pacific businesses an opportunity to share their journey and tell their story as this is an integral part of their heritage.

Many Pacific people in Waikato are young, in the 14-35 age group, and Burgess says creating role models in the community is important. “Some of these businesses have gone through a lot of trials and failures but are resilient and pick themselves up. Those are some of the stories our youth needs to hear. It’s not going to be easy for them, the world is changing so much.”

For Burgess, the network represents more than six years’ planning and work.

She saw the gap and started networking events in 2012. That led to the formation of the Waikato Samoa Business Network, but those involved realised there was a wider interest and wider need.

They changed to Waikato Pacific Business Network and incorporated in December 2017, bringing in a high-powered executive committee to lead the organisation to the next stage.

That committee includes Richard Coventry from the Perry Group, Doug Wilson from Deloitte, Aidan Warren from McCaw Lewis Lawyers, Lale Ieremia from PCM Consulting Ltd, Rachel Afeaki-Taumoepeau from FaceNorth Promotions Ltd and Alana Tyrell from Alignz Recruitment, with Pasifika making up more than half of its executive membership.

“Through the Waikato Pacific Business Network we believe that we can grow our Pacific community to create wealth for our Pacific people and provide stability not only in the community but most importantly our families,” Burgess says.

“It’s a really interesting journey and I think we’re in at the right time given the hype about Waikato and economic growth.”