We’re all in this together. That’s the view of a Waikato sustainability champion who wants to see urban and rural people working together on New Zealand’s environmental challenges, particularly around water. 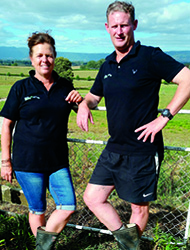 Tracy and Wynn Brown take the long view when it comes to farming and sustainability.

Brown won the sustainability superstar award at November’s Sustainable Business Network Awards for her work in the dairy industry.

She and husband Wynn also won the inaugural responsible dairying award at last year’s Dairy Industry Awards, and in 2010 were supreme winners of the 2010 Waikato Ballance Farm Environment Awards.

If we really want to make a difference to our waterways we’ve all got to do it.

The long view is knitted into the name of their farm, Tiroroa, which can be translated as “extensive view” or “view to the future”. That ethos has seen the couple farming sustainably from the start, including extensive planting, fencing off waterways in the early days and upgrading their effluent pond despite already being compliant.

They have a herd of up to 700 cows on 350ha, which includes 20ha retired by the couple into trees and wetlands.

Farming responsibly for them means looking after not only the land, but also the welfare of animals and staff, while giving back to community.

Wynn says best practice includes making sure staff are well trained and understand why they are doing tasks around the farm and the importance of treating stock well.

We’ve got to stop blaming each other, accept there’s an issue and try and figure out how we can all work
together.

She says winning the superstar award has enabled “massive opportunities” to have conversations with urban people about what farmers are doing, including a recent trip to Auckland to talk on a city council panel and sharing knowledge with a group of young Asia-Pacific leaders concerned about waste and climate change.

“It’s not about the award, it’s about the opportunity to have a conversation about the change that’s happening in the
industry,” she says.

“It’s a sign that we’re making progress, to be able to be acknowledged in that way.”

She says a Dairy NZ initiative launched in November, called The Vision is Clear, came partly from the Dairy Environment Leaders.

“The aim is to bring all New Zealanders together, urban and rural, and encourage people to take small actions that will have a big impact – things like washing your car on the lawn instead of the concrete. There’s a whole campaign that’s going to go for about three years connecting rural and urban and trying to get everyone to understand that we’re all in this together, and the job is too big for dairy to do alone.”

Wynn: “If we really want to make a difference to our waterways we’ve all got to do it.”

Tracy: “We’ve got to stop blaming each other, accept there’s an issue and try and figure out how we can all work together.”

•
Nominations are open now for the Fonterra Responsible Dairying Award, and close on March 20. Go to https://www.dairyindustryawards.co.nz/responsible-dairying-award/