Eliot Jessep has been a lot of things – a radio worker, a real estate salesperson and even a stage lighting designer among others.

What he says he definitely isn’t is a gamer, but somehow Jessep found himself creating and running a successful board game store and becoming a board game producer.

It started in 2013 when the Hamilton 23-year-old noticed the party game Cards Against Humanity was the top trending product on Amazon in America. What he also discovered was that the game wasn’t available in New Zealand.

He started to buy the game off the shelf from America and make it available to New Zealanders by selling it on TradeMe. At that point, working out of his bedroom, Jessep never thought he’d end up where he is today. 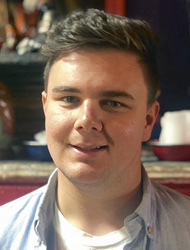 Eliot Jessep has big plans for his board game company.

“I thought it was just a hobby to make a little bit of extra money on the side but within six months I was making more money from it than I did in normal life,” said Jessep.

After three years of selling games on TradeMe, Jessep decided to set up his own store. In early 2017 he officially launched his own company called Game Kings and it has since become one of New Zealand’s fastest-growing online stores.

He brought on two partners to help set up and run the store. Jan Sosinko, a family friend, has been a massive support to Jessep and is also an investor of the company. He also brought on Ben Hawkin, who is Game Kings co-creator and looks after day-to-day operations.

Last year they went on to design and produce their own party game, Kiwis Against Morality, which made the company $250,000. This year they plan to continue producing party and family-friendly games with two new releases through the year.

“Just retailing other people’s games wasn’t exciting enough for me and I wanted to be creative,” said Jessep.

His focus these days is figuring out how to keep growing, partnering and selling. He travelled to Germany early in the year where he attended a toy fair and met with toy and game manufacturers. Next month he will be back on a plane to meet with more manufacturers in China.

“I make the effort to travel so I can make friends and form relationships with my suppliers and manufacturers. I love to take them out for a drink and a party,” said Jessep.

He is also set to partner with a Canadian board game company which is keen to license their games and then turn them into Canadian versions.

In the works at the moment is a family-friendly Te Reo Māori board game that will be released in June and they are currently looking for investors to help with funding and manufacturing that game.

They will also be releasing another game in November.

Jessep has bigger ambitions for Game Kings than just producing board games in New Zealand – in five years he hopes to be a giant board game publisher and distributing Game Kings products globally.

“I think the traditional board game companies are behind the times and we want to come through and create new and unique board games that will have a global reach. We have really big ambitions,” said Jessep.